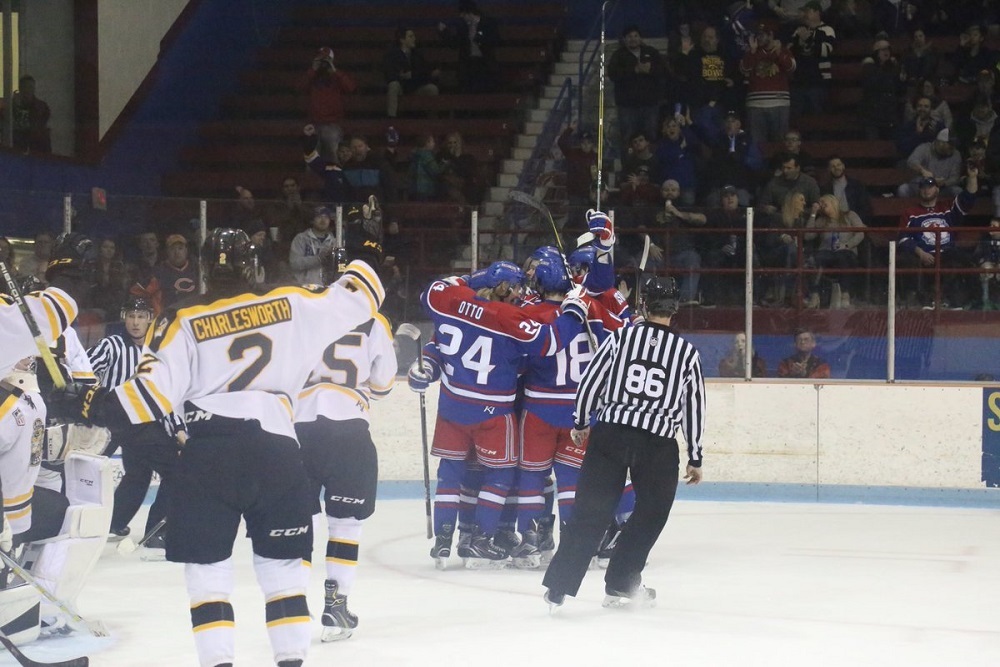 It was as complete of a game as I’ve seen from Des Moines tonight, and with playoffs beginning to loom near it couldn’t have come any later…

Des Moines snared two huge points to keep pace with the rest of the West tonight, shutting out Green Bay 3-0 at home.

The opening period was methodical for Des Moines, as they took care of the puck and with some more help from Roman Durny, held Green Bay off the scoreboard in period one.

There was one giant moment of alarm for the Bucs, where the shoe was on the other foot for Durny. He turned over a puck behind the net to the Gambler’s Trenton Bliss, whose wrap-around was stymied by a diving Scooter Brickey.

The Buccaneeers outshot the Gamblers six-to-five in the opening twenty as scoring chances were at a premium.

The second period would be a much different story…

Des Moines came roaring out of the gates and drew an early penalty on Green Bay. Despite not capitalizing on the PP chance, it shifted the momentum clearly into Des Moines’ favor.

After holding the Gamblers hostage in their own zone for almost the entirety of the opening thirteen minutes of the second, Julian Napravnik came knocking.

He delivered a slick wrister from the slot off a delicious feed from Reed Lebster, bringing the Bucs fans leaping to their feet in a packed house.

Des Moines came into tonight having scored just one goal in each of their last three games, determined tonight would be different, and it was.

Drawing another penalty, the Bucs set up shop six-on-five with Durny on the bench for a delayed penalty. After narrowly missing a chance of his own, Chris Lipe centered from the goal line for Nick Werbik.

Werbik’s initial shot was blocked, but the fortuitous Czech stuck with the play, and followed up an aerial rebound, batting it out of the air and into the back of the net.

A dazzling display of hand-eye from the Bucs leading scorer, gave Des Moines some comfort going into the final corridor of action.

Following a period where the Bucs were on the hunt for 20 minutes, Dave Allison slowed things down and reined in the Bucs pressure a bit.

Des Moines would be outshot in the third period seven-to-two, but Green Bay’s chances were few-and-far between, and never really gave Durny much trouble.

Mike Hardman would seal it with a late empty-netter after a fabulous defensive showing with Gambler goalie Maksim Zhukov on the bench for the extra attacker. Durny earned a well-deserved second win of the season with a 15-save shutout, his first in the USHL. Zhukov was delivered his 12th loss of the season, allowing two goals on 18 shots.

It was a mature performance tonight from Des Moines who executed and kept to their game plan.

Could this be a cornerstone victory for an assault into the playoffs? Only time will tell, but the tides may be turning in Des Moines.

Bucs are in Sioux Falls next weekend for two shots at redemption against Sioux Falls, both Friday and Saturday night.