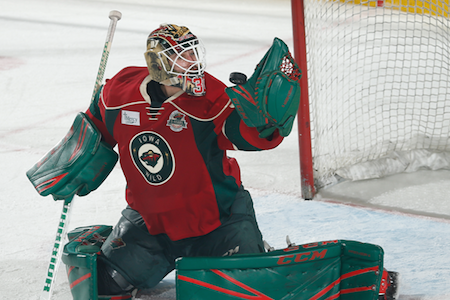 Iowa forward Luke Kunin scored the Wild’s lone goal of the game, which came at 6:08 in the first period with the team trailing 2-0. Standing in front of the net, Wild forward Cal O’Reilly corralled a loose puck and drew Reign goaltender Cal Petersen (22 saves) to the right side of the net. O’Reilly then sent a backdoor pass to Kunin, who buried his shot into the wide-open net. Kunin’s goal was his eighth goal of the year, while O’Reilly’s assist was his 30th of the season, which ranks fifth in the AHL.

The Reign added to its lead with three goals in the second period. Mersch recorded his second tally of the game at 6:33 to make it 3-1, capitalizing on a 2-on-1. At 12:40 in the middle stanza, Reign defenseman Oscar Fatenberg scored his first AHL goal, finding the back of the net on a 5-on-3 power play, giving Ontario a 4-1 lead. The Reign potted its fifth goal of the game 67 seconds later when forward Philippe Maillet scored at 13:47 in the second period for Ontario’s second power-play goal of the contest.

Ontario headed into the third period with a 5-1 lead and a 31-16 shot advantage.

Iowa concludes its three-game California road trip with a contest against San Diego Tuesday. Puck drop is at 9:00 p.m. CT.