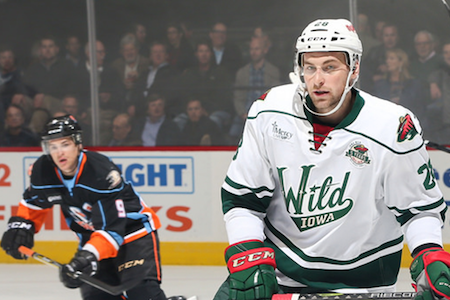 Iowa started out the game with a 7-0 shot advantage, but it was San Diego who found the back of the net first, scoring on the team’s first shot of the game at 9:47 in the first period. Gulls leading scorer Kalle Kossila scored his 12th goal of the season when he slammed home a scoring chance after Iowa blocked the initial shot from defenseman Steve Oleksy.

Fifty seconds later, San Diego made it 2-0 with a goal from forward Joe Blandisi. Forward Mitch Hults ripped a shot from the point, which deflected off Blandisi, away from Wild goaltender Niklas Svedberg (24 saves) and into the back of the net.

Wild forward Zack Mitchell cut the Gulls’ lead to 2-1 with his 11th goal of the season at 14:31 in the opening frame. After receiving a pass from forward Kyle Rau, forward Cal O’Reilly and Mitchell entered San Diego’s defensive zone on a 2-on-1. O’Reilly fed Mitchell with a cross-ice pass and Mitchell roofed his shot, beating San Diego goaltender Kevin Boyle (32 saves) for his third goal in two games. O’Reilly’s assist was his 31st of the season, which is tied for fifth in the AHL in helpers, and he currently has eight points (1g, 7a) in his last six games.

At the end of the first period, San Diego led 2-1 while Iowa held a 13-8 shot advantage.

It wasn’t until 2:27 in the third period until either team found the back of the net again. San Diego defenseman Jaycob Megna caught a pass from forward Sam Carrick at the blueline. He walked into the high slot and snapped a shot on net and beat Svedberg to give the Gulls a 3-1 lead early in the third period.

At 13:13, the Gulls opened up a 4-1 lead as forward Giovanni Fiore converted for his 12th goal of the season. After an initial shot from Kossila, Fiore put a shot on net and, with Svedberg out of position due to the sliding Wild defenseman Zach Palmquist, found twine.

An empty-netter by Oleksy iced the game for the Gulls and with the final whistle, Iowa lost consecutive games for the first time since Opening Weekend despite outshooting San Diego 33-29. With the loss, Svedberg had his five-game winning streak snapped, the longest in franchise history.

The Wild ends its road trip with a 3-2-0-0 record, including the team’s record-setting 8-0 win against Bakersfield Friday night. Iowa finishes the road swing in third place in the Central Division.

Iowa returns home with a five-game homestand, kicking it off with a game against Chicago Friday at Wells Fargo Arena. Puck drop is at 7:00 p.m.