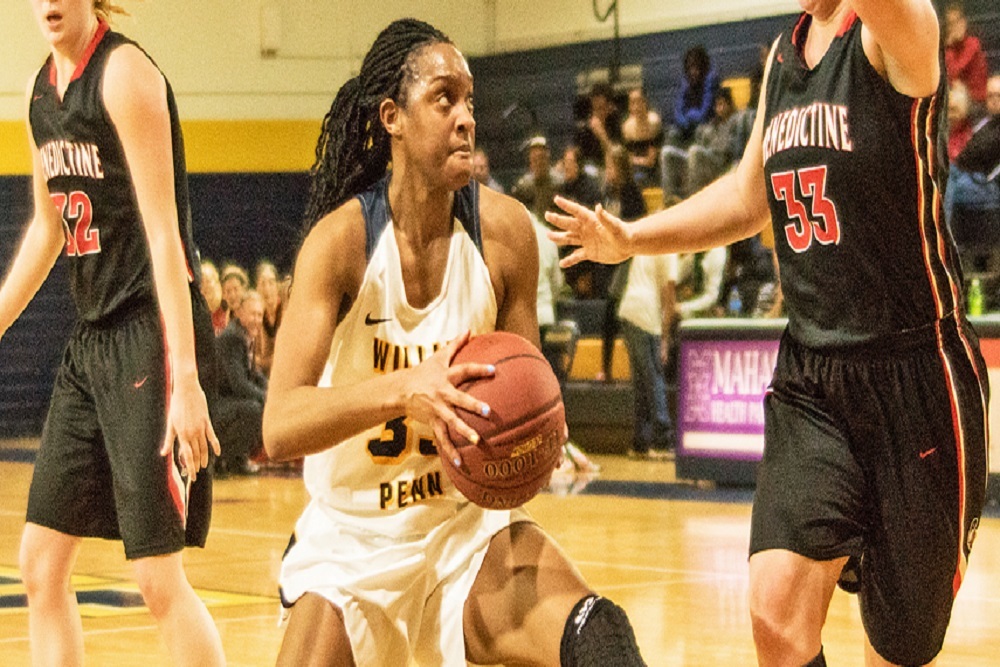 WPU (18-5, 12-2 Heart) has now won a season-high five games in a row, the longest streak for the program since taking six straight during the 2012-2013 campaign. The win helps the navy and gold keep pace with MidAmerica Nazarene and Central Methodist at the top of the league standings. It also sets up a colossal matchup with #5 MNU on Saturday in Olathe, Kan. (2 p.m. tipoff).

The start of Wednesday's battle was all about Nwagbaraocha as she entered just 10 points away from 1,000 for her career. It fortunately did not take long for the junior to get the job done as she made four of her first five baskets, all in the first quarter. With 2:50 still left in the opening period, point #1,000 was recorded as Nwagbaraocha knocked down the first of two free throws.

Also of special note, Nwagbaraocha surpassed 700 career rebounds Wednesday (currently at 704) and becomes just the 10th Statesmen ever to record 1,000 points and 700 rebounds.

Back to action, it was not only Nwagbaraocha who had a huge night against the Bobcats (3-19, 0-14 Heart). All five starters were excellent in their own way as WPU pulled out to a 25-6 edge after 10 minutes of play.

The Statesmen have had issues in the second quarter lately, but managed to top PSC Wednesday, outscoring the visiting crew 20-18 to extend their advantage to 45-24 at halftime.

The hosts did not slow down after intermission in rolling past Peru State, highlighted by being +18 in the turnover battle (WPU had 12 errors, while PSC had 30). That led to a gaudy 36-3 edge in points off turnovers for the victors.

William Penn outshot the visitors 49.2%-42.1% and also held a 31-25 mark in rebounds; the Statesmen outscored the Bobcats 14-3 in second-chance points.

While Nwagbaraocha was stellar down low, going 7-for-9 from the field (6-for-8 FT), Sarah Hansen (Sr., Kewanee, Ill., Psychology) was the game leader in points with 26. The senior was 8-for-16 overall, including finishing 6-for-12 from the perimeter.

The Statesmen not only lived from deep, but they lived well, making a season-high 15 trifectas on 48.4% shooting.

Kate Ylitalo (So., Maple Plain, Minn., Biology) added 17 points, but did much more damage on the defensive end, especially in the first half with seven steals. She ended the win with eight thefts, while William Penn stole 19 passes as a collective unit.

Jenna Santi (Jr., Oak Creek, Wis., Sports Management) was next with eight points and had a tremendous effort as a distributor with 10 assists; the Statesmen managed 24 assists on their 30 made buckets.

"I am happy with our defensive effort tonight and the way we shared the ball on offense," Head Coach Steve Williamson said. "It is always good when you have 20 or more assists as a team."