Wild kicks off homestand with 4-1 victory against Chicago 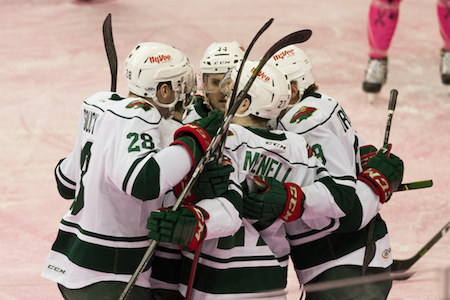 After a scoreless first period, Chicago forward Bryce Gervais tallied his fourth goal of the season just 37 seconds into the middle frame. Gervais took advantage of an Iowa Wild turnover and skated in all alone on Niklas Svedberg (29 saves). He roofed his shot over Svedberg’s glove and the Wolves took a 1-0 lead.

At 8:14 in the second period, Wild forward Sam Anas evened things up with a snapshot from the bottom of the left circle. Heading into the offensive zone on a 2-on-1, Anas sauced a shot between the legs of Wolves goaltender Maxime Lagace (22 saves) to tie the game 1-1. Assisting on the play was forward Kyle Rau and defenseman Ryan Murphy.

Anas scored his second goal of the game at 11:44 in the third period when forward Gerry Mayhew sprung him with a lead pass. Anas couldn’t get a shot off, so he wrapped around the net and tucked the puck behind the post for the 2-1 lead. Also assisting on the play was defenseman Zach Palmquist.

Wild forward Landon Ferraro registered his 11th goal of the season to give Iowa the 3-1 lead at 14:20 in the third stanza. Standing alone in the slot, Ferraro got one-timed a pass from forward Pat Cannone, beating Lagace over his glove. Defenseman Nick Seeler recorded his 10th assist of the season on the play.

Rau iced the game for the Wild, scoring an empty-net goal at 18:10 in the third period to give Iowa the 4-1 lead. It was his 14th of the season, and Palmquist earned his second assist of the game on the play.

When the final buzzer sounded, Iowa earned the 4-1 victory, while Chicago outshot the Wild 30-26. With the win, Svedberg earned his sixth win in seven games. Anas’ two-goal night was his team-leading third such game and his 18 goals also lead the team. Rau’s multi-point night was his seventh of the season and Palmquist’s pair of assists was his third game with at least two helpers.

Iowa welcomes Rockford IceHogs to Wells Fargo Arena Saturday for the team’s annual Pink in the Rink game. Puck drop is at 6:00 p.m.