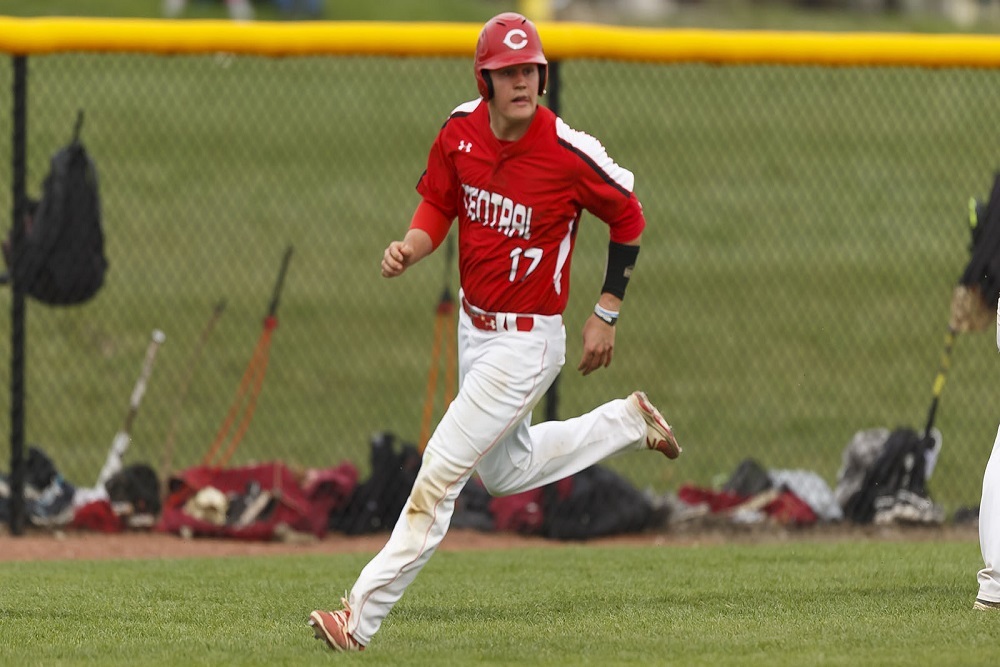 On paper, the Central College baseball team appears destined to take a step back in 2018. The results on the field could prove otherwise, coach Matt Schirm said.

But after sweeping its final three-game series to claim the sixth and final spot in last year's Iowa Conference tournament, the Dutch have loftier expectations, even with several new faces in the lineup.

"With maybe one exception, I think we can match or exceed the production we had at every position last year," Schirm said. "I don't expect any growing pains. I think we can be really solid if we put it all together and stay healthy."

That confidence is bolstered by the reassuring presence of a pitching staff ace, all-conference and all-region senior Dylan Diveney, whose action was limited last year in returning from injury.

The return of junior Ryan Bouwman brightens the picture at first base considerably as well. Bouwman was Central's leading hitter as a freshman in 2016, batting.310 with 10 doubles and two homers, then transferred for a year before rejoining the Dutch. He's the early favorite but not without challenges from seniors Ryan Garrett and Kyle Crampton. Garrett hit.290 with seven RBIs in 24 games while Crampton appeared in 14 games.

"Ryan Bouwman was our top hitter as a freshman and could be our top hitter again," Schirm said. "Kyle is a big power guy while Ryan Garrett is more consistent contact hitter. All three are designated hitter possibilities as well."

There's a big hole at second base with the graduation of Noah Stochl and Schirm is likely turning to junior Chris Riddle, who hit.280 in 24 games last year, primarily as a designated hitter. He drove in 13 runs.

Riddle will be challenged by freshman Anthony Fumagalli of Plainfield, Illinois.

"Second base is a question mark but I do feel good about it," Schirm said. "Offensively, I think we can do as well or better than last year but Noah was really good on defense. That's tough to replace."

Things are stable at shortstop as junior Garrett Saunders returns after hitting.314 and posting a.938 fielding percentage. He belted 12 doubles and four home runs with 25 RBIs.

"Garrett played in Chicago this past summer and played some very good competition," Schirm said. "I look for him to take another step forward."

The back-ups lack experience and if Saunders is injured, Schirm might contemplate some position changes.

Sophomores John Rugen and Kaiden Fiebelkorn will battle at third base. Neither has significant varsity experience.

"John moved over from first base and did some good things in the fall season," Schirm said. "Kaiden was a little more consistent defensively this fall."

Sophomore Trevor Kimm won the catching job as a freshman and appears to have a firm grasp on it. He hit.272 with 14 RBIs but more important to Schirm was his work behind the plate.

"He does everything well—receiving, blocking and throwing," Schirm said. "He needs to take a step forward offensively, but he certainly held his own last year."

The Dutch have some capable options in sophomore Blake Wooten and senior Dan Weir as well as a couple of promising freshmen.

The outfield is a bit unsettled but deep. Sophomore Joe Rebik is the frontrunner in left field. His rookie year was cut short by injury after just six games.

"He had a good fall season," Schirm said.

Sophomore Cole Havlovic will likely duel freshman Lucas Farren of Yorkville, Illinois in center field. A transfer, Coy Moore, could cause Schirm to rethink the issue, but missed fall workouts due to illness.

Junior Tanner Wood, who started in left field last year, will likely move to right. He hit.270 with 11 doubles and 25 RBIs. But he's also a regular out of the Dutch bullpen so others will see action. Those innings could go to one of the center field candidates or freshmen Patrick Diemer of West Des Moines and Nick Strysik of Crest Hill, Illinois.

Schirm said Central's offensive production in the outfield could rise this year but matching the defensive skills of last season's outfield isn't as simple.

"I do like the guys we have competing in the outfield but it may take a while to get to that level defensively," Schirm said.

Garrett, Crampton, Strysik, Rugen and senior Michael Collins are among the options at designated hitter. Schirm will wait for the rest of the lineup to take shape before making a decision and it's likely that more than one player will get an extended look.

Building a pitching rotation is a far less complex task when there's a senior No. 1 hurler with Diveney's arm and credentials on the staff.

"He's a guy you can rely on every time out," Schirm said.

The league's pitcher of the year already as a freshman in 2015, Diveney missed much of the following season with injury and was limited early last year, but still gained first-team all-league honors for the second time and was a third-team all-Central Region pick by d3baseball.com again as well. He was 2-0 in 43.1 innings, with a stingy 1.66 earned run average, striking out 41 and walking 12. Diveney yielded just two extra-base hits.

"Dylan is working hard," Schirm said. "He went to a pitching academy this summer and is doing a velocity enhancement program. He has the talent to be the best pitcher in the conference. He has showed that before and that's what we need this year."

Lining up behind him in the rotation are sophomore Nick Long, sophomore Zach Edwards and Wood, with sophomores Rece Martin and Tre Stanton competing for the No. 5 position. A freshman or two could forcer their way into the picture.

"He was a conference-game starter as a freshman and he's bumped his velocity up this fall," Schirm said.

Edwards was 2-3 in 13 appearances over 44.1 innings, including three starts.

"Zach was a reliever last year but he really wants to start," Schirm said. "He's got good numbers and good velocity."

"Tanner didn't have a huge pitching role last year but a lot of that was because we needed him in the outfield," Schirm said. "But we're a lot deeper in the outfield this year."

Martin and Stanton appeared in eight and six games, respectively.

Schirm likes his options in the bullpen as well.

Crampton, who also plays first base, had a 5.29 ERA in 11 relief appearances over 17 innings last year.

"He'll be one of our top relief guys," Schirm said.

A member of last year's starting rotation, senior Adam Carey, is coming off injury and will be subject to an innings restriction similar to what Diveney dealt with last year, but could give the bullpen a huge lift.

"We'll pitch him a little in Florida over spring break," Schirm said. "We're excited to have him back."

Schirm is also enthused about as many as five freshmen who will compete for innings.

"It's hard to have too much pitching," he said. "The biggest thing is we need to keep healthy."

The Iowa Conference and the season

Central was just three wins out of third place in the conference last year, making a leap forward seem attainable.

"I think we can be in the top half and make a run for the championship," Schirm said. "There's no reason we can't."

Wartburg will again be the favorite but Schirm said the league is more wide open than some years.

"We need to get a little bit better on the mound and at the plate and stay about the same as last year defensively," he said. "And we need to be more consistent."

An unusual two-week spring break on the Central academic calendar allows for some extra time in Florida without making an additional weekend trip earlier. The Dutch will have a pair of two-day breaks on the trip, allowing time for some junior varsity action as well as rest for pitching arms.

"I like the way the schedule sets up," Schirm said. "I hope we can build momentum in Florida and have a good trip so we hit our stride when the conference season starts, which we haven't done since I've been here."

"Zach has been outstanding in all aspects of coaching and recruiting," Schirm said. "We have eight freshmen from Illinois and that's his territory. All eight are solid players. I put him in charge of the offense and he earned my trust pretty quickly.

"He relates really well to the players. The guys love him."

Spencer Gritsch, a former Dutch player, is also in his second season as an assistant, coaching first base, working with the offense and handling defensive positioning during games.

"Spencer is another good addition," Schirm said. "The guys really like him."

All of which has the arrow pointing up on Central baseball.

"I like the direction we're headed," Schirm said. "We're deeper and more talented than any year since I've been here. It's got me pretty optimistic.

"But a lot of our talent is younger so we need to see how the players perform. We need to make sure they develop and get better as the season progresses."