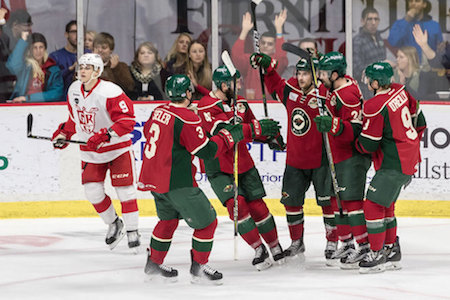 At 6:09 in the third period with the Wild already on a 5-on-4 power play, Stars forward Greg Rallo headed to the box for hooking, giving Iowa a 5-on-3. On the ensuing man advantage, Wild forward Justin Kloos passed back and forth with Iowa captain Cal O’Reilly. Kloos unleashed a shot on net from the top of the right circle, which beat Stars goaltender Landon Bow (25 saves) to give the Wild the 2-1 lead at 6:21 in the final frame.

Kloos’ goal stood as the eventual game-winner and was his 16th goal of the season, while O’Reilly’s assist was his 35th of the 2017-18 campaign. Also earning an assist on the play was defenseman Zach Palmquist.

Texas opened the scoring at 13:47 in the first period, marking the sixth time in the last seven games Iowa’s opponent has scored first. Splitting the Wild defense, Stars defenseman Michael Paliotta redirected a pass from forward Travis Morin behind Svedberg for his first goal of the season. Morin’s assist was his 39th of the season, which leads the AHL.

Wild forward Pat Cannone evened the score at 1-1 at 5:52 in the second period. Battling below the goal line, forward Ryan White sent a no-look, behind-the-back pass through the crease, right to Cannone’s stick. He roofed the one-timer for his 13th of the season. Wild defenseman Carson Soucy registered his ninth assist of the season on the play.

Iowa heads to Grand Rapids Friday to begin a six-game road trip, the longest of the season. Puck drop against the Griffins is at 6:00 p.m.