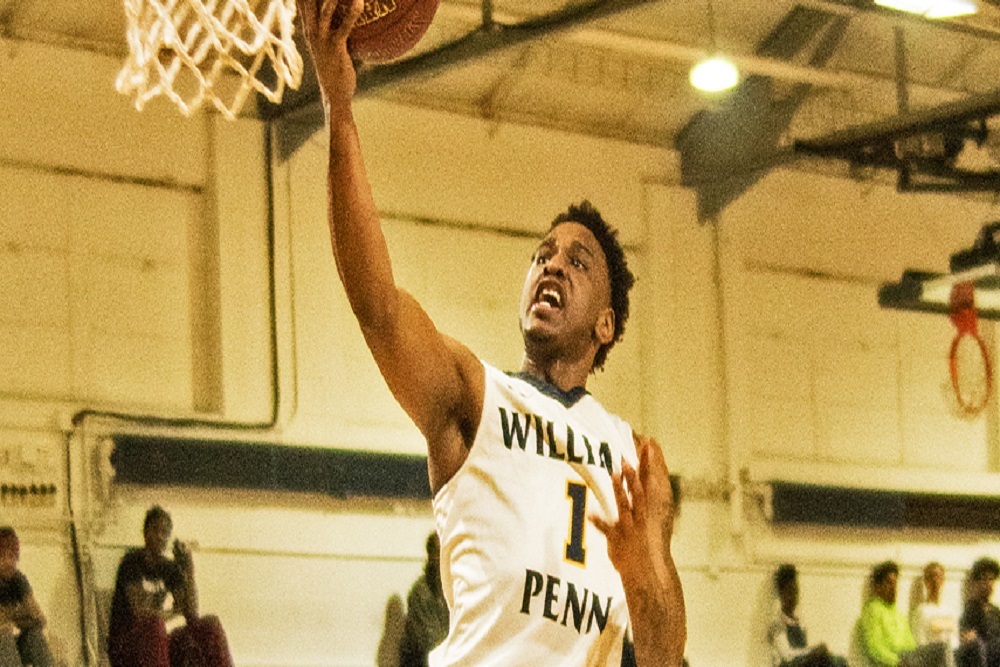 Four players scored at least 18 points as the Statesmen men's basketball team advanced in the Heart of America Athletic Conference Tournament with a 112-97 quarterfinal win over #8 seed MidAmerica Nazarene Wednesday.

Top-seeded William Penn (27-3) won its quarterfinal matchup for the sixth year in a row; the program has only lost three times in the quarterfinal round since joining the NAIA in 2001-2002.

The navy and gold will remain at home Friday to host #4 seed Peru State in the semifinals at 7 p.m. The teams split their regular season series with Peru State winning 100-91 on December 2 in Peru, Neb. and WPU claiming a 110-79 victory over the Bobcats on February 7 in Oskaloosa. The other semifinal battle will feature #3 seed Graceland traveling to Fayette, Mo. to take on #2 seed Central Methodist.

The Pioneers (16-15) gave the hosts all they could handle for much of the contest as they outshot the Statesmen 57.8%-47.9% and also outrebounded them 36-31. In spite of those numbers, William Penn still pulled out to a 26-17 edge midway through the first half.

In a game of runs, the visitors had one more up their sleeves to get within five just three minutes later, but the navy and gold were aggressive in attacking the basket and pulled away with a massive edge at the line. WPU was 33-for-43 outing at the charity stripe, while the Pioneers earned just 19 trips (15 makes). Four MidAmerica Nazarene players fouled out as the visiting team was whistled for 32 fouls.

The Statesmen answered MNU's final rally with seven points of their own and kept the lead in double digits the remainder of the night. It is the 17th time this year that the nation's top-scoring squad has eclipsed the century mark.

"I have great respect for MidAmerica Nazarene and Head Coach Rocky Lamar," Head Coach John Henry said. "Anytime and any year you defeat that program with that coach, it is a great win."

William Penn also countered its foe's strong shooting by forcing 18 turnovers, while committing a season-low four mistakes itself (previous low was nine on four occasions). The hosts took full advantage of those extra opportunities with an 18-3 margin in points off turnovers.

Although it lost the overall rebounding battle, William Penn was +4 on the offensive end (13-9), which led to a 15-10 mark in second-chance points.

Terrell Thompson (Sr., Indianapolis, Ind., Wellness and Recreation) took the game in his hands by leading the Statesmen in points (26), assists (7), rebounds (6), and steals (3). The senior was 6-for-11 from the field, but much more impressively, he was 13-for-18 at the line. His 18 attempts tie for the fifth-most in school history.

Mikeal Donaldson (Sr., Columbia, S.C., Wellness and Recreation) was next on the scoring list with 20 points on 8-for-10 shooting (1-for-1 3-PT, 3-for-3 FT). Donaldson also matched Thompson with six boards.

"Aakim and Terrell were very aggressive tonight, but also shared the ball," Henry added. "I love that they combined for 25 free throws. Our bench also played well tonight."

William Penn won despite being without the services of second-team all-Heart performer and Heart Defensive Player of the Year JC Washington (Sr., Houston, Texas, Sociology) who is out due to injury.

"Dom and Mike picked up some slack with JC out," Henry said. "It is uncertain when he will return as we want to protect him and think about the big picture with nationals coming up. He wants to play, but we cannot risk it at this point. We want him a bit healthier before he returns."