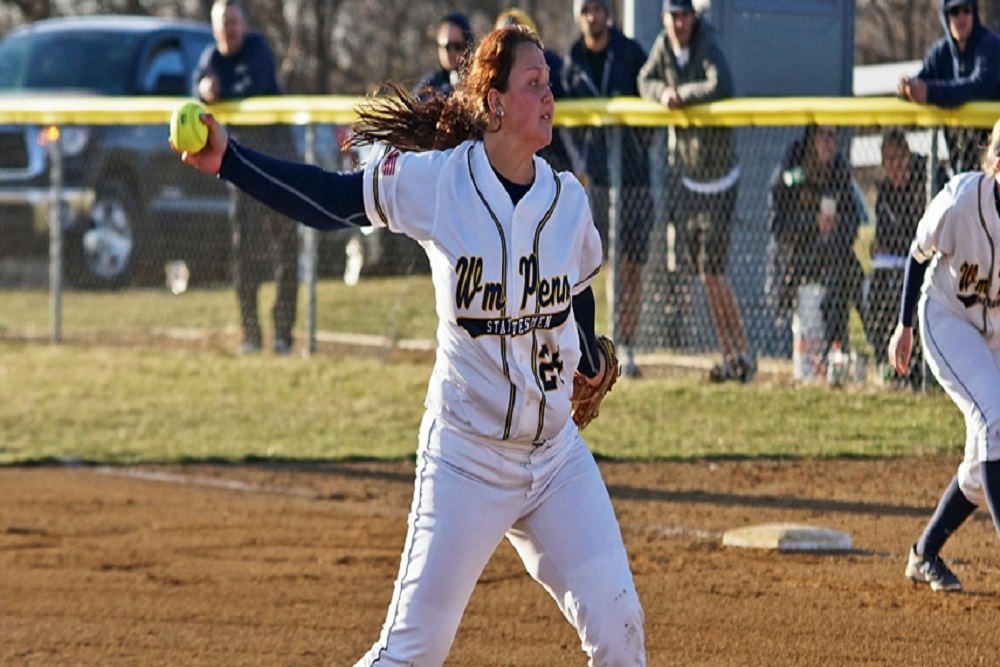 The William Penn softball team used a pair of strong pitching performances to take down Concordia (Mich.) twice in a non-conference doubleheader Friday.

The navy and gold jumped all over the visitors early, scoring three in the first inning and four more in the second. Dalaney Bice (So., Woodward, Iowa, Human Services & Psychology) started things off with a run-scoring double, while Tabitha Scott (Jr., Placentia, Calif., Psychology) also brought in a tally with a single in the opening frame.

Highlighted by a lead-off double by Sonia Reddy (So., Tracy, Calif., Exercise Science), William Penn loaded the pads in the second and Shelby Copley (Jr., Denver, Colo., Secondary Education) cleared them with a grand slam. The home run is her first at WPU.

The offense unfortunately went cold over the next three innings, but pitcher Katie Springer (Jr., Riverside, Iowa, Undecided) kept CU at bay, allowing just one run (earned) on four hits in a complete game. The junior struck out five against two walks.

The Statesmen immediately caught fire again in the sixth, though. Reddy's led off with a single and Bice abruptly ended the game in the next at-bat with a walk-off two-run homer. It is her first roundtripper of the season. The sophomore, who also pitched last year, is reveling in her offense-only role as she is currently hitting a team-best.458.

The victors ended the opener with eight hits, led by Bice going 3-for-4 with three RBIs and three runs scored. Reddy was 2-for-3 with three runs, while Copley drove in four and scored twice.

It was all about the pitching in the nightcap with Copley permitting just four hits in a complete-game shutout; the Cardinal pitcher limited the Statesmen to only two base knocks.

WPU put runners in scoring position in the first and third frames, but failed to bring them around. With the teams still marred in a scoreless tie in the seventh, Lexi Resa (Fr., Liberty, Mo., Biology) got it going with a lead-off single. She was then moved to third on back-to-back sacrifice bunts.

With two outs and Resa at third, Roxanna Jensen (Sr., Coto de Caza, Calif., Psychology) entered as a pinch-hitter and hit a hard ground ball to the second baseman. The fielder bobbled the ball, regrouped, and fired it over to first, but not in time. Jensen was safe and Resa scored from third to win the game for the navy and gold.

In an otherwise well-played game, CU committed three errors, while William Penn had one fielding mistake.

Reddy joined Resa as having the only other hit in the contest.