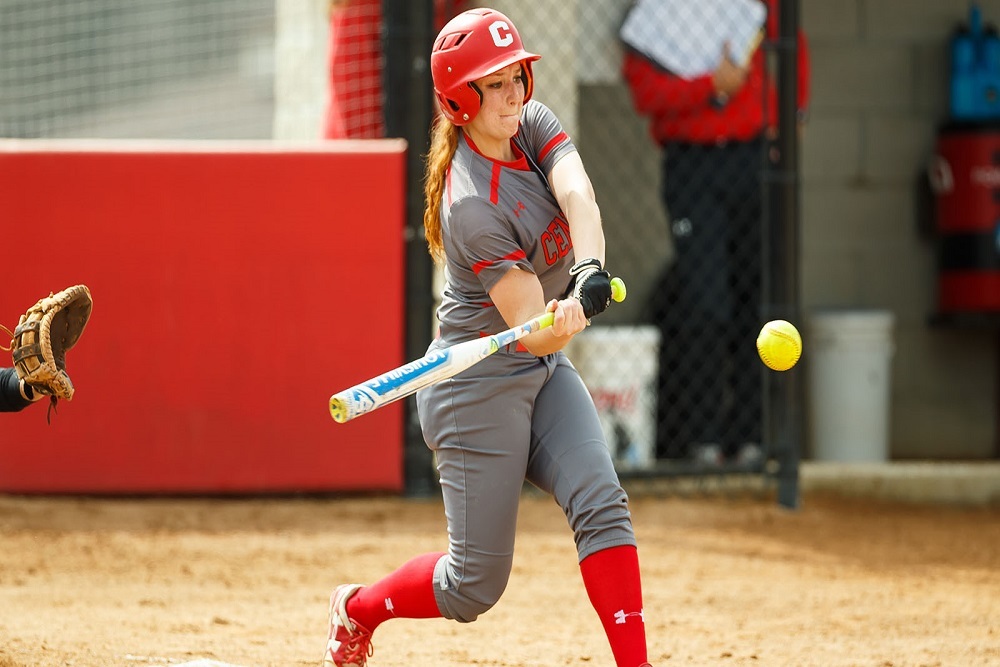 It was an inning that got away and it was enough to cost Central College its home-season opener with Grinnell College Wednesday before rebounding for a doubleheader split.

A five-run fifth inning for the upstart Pioneers (10-4) helped them hold off No. 15-rated Central 5-3 before the Dutch (13-5) answered with a convincing 10-2 five-inning victory.

Center fielder Sara Tallman's (sophomore, Pella) average continued to soar, with four hits in the two games. She was 3-for-3 in the nightcap with three runs scored and three stolen bases. Tallman is hitting.431 and has 20 steals in 21 attempts with a team-high 24 runs scored. Meanwhile, right fielder Shaye Witte (sophomore, West Des Moines, Waukee HS), who bats at No. 2 in the order behind Tallman, added three hits for a torrid.512 mark in her first season at Central.

But it was that fifth inning in game one that clouded the day for the Dutch. Pitcher Mariah Fritz (junior, Tama, East Marshall HS), after four shutout innings, walked five batters—one intentionally—and yielded three hits in the frame, which was further extended by a Central error.

"We had one bad inning, but we've said forever, one inning can be the difference and it was," Wares said.

Fritz (6-3) threw five innings, allowing just two other hits and no walks while striking out one.

"Her bar is higher," Wares said. "She knows she wasn't at her best but she was still good enough to win."

"I thought Danielle pitched really well," Wares said. "She kept us in the game."

Central, which hadn't played in 17 days, outhit Grinnell 7-6, but was scoreless until the seventh when the Dutch struck for three runs and had the potential tying run at the plate. Witte had a two-run triple. But Grinnell recorded seven outs on line drives.

"I actually thought our bats stayed pretty good after the layoff," Wares said. "We've been working at it, but I've never seen so many balls hit right at people. I think if we could have snuck something across earlier, it might have been different, but we didn't."

It was Grinnell's first-ever softball win over the Dutch. Central leads the teams' limited all-time series 7-1.

"Give Grinnell credit. They're much-improved and we knew that. That's a huge win for their program."

Central took command early with two runs in the first inning of the nightcap, adding three more in the third inning, three in the fourth and two to end it in the fifth.

Left fielder Tabitha Taylor (senior, Grimes, Dallas Center-Grimes HS) belted her team-high fourth home run, a three-run shot, and had five RBIs in the game. She had six for the day for a team-high 18 for the year.

"We had a good bounce-back in game two," Wares said. "I was happy we were able to get a couple of runs early."

The layoff, which saw the Dutch largely restricted to indoor practices during a wet, chilly month, is in the rear-view mirror as the Iowa Conference whirlwind begins Friday with a twinbill against Coe College at 2 p.m. at the A.N. Kuyper Athletics Complex field. The league slate ends just 30 days later. Coe, which is 8-8 after a demanding non-conference schedule, boasts a powerful offense, as does Buena Vista University, Central's Tuesday opponent at Storm Lake.

"We go right into it," Wares said. "We probably have the most difficult start of anyone in the conference. We'll have a good idea after these four games where we are."

A video webcast and live stats of Friday's games can be accessed through the Central athletics website at athletics.central.edu.