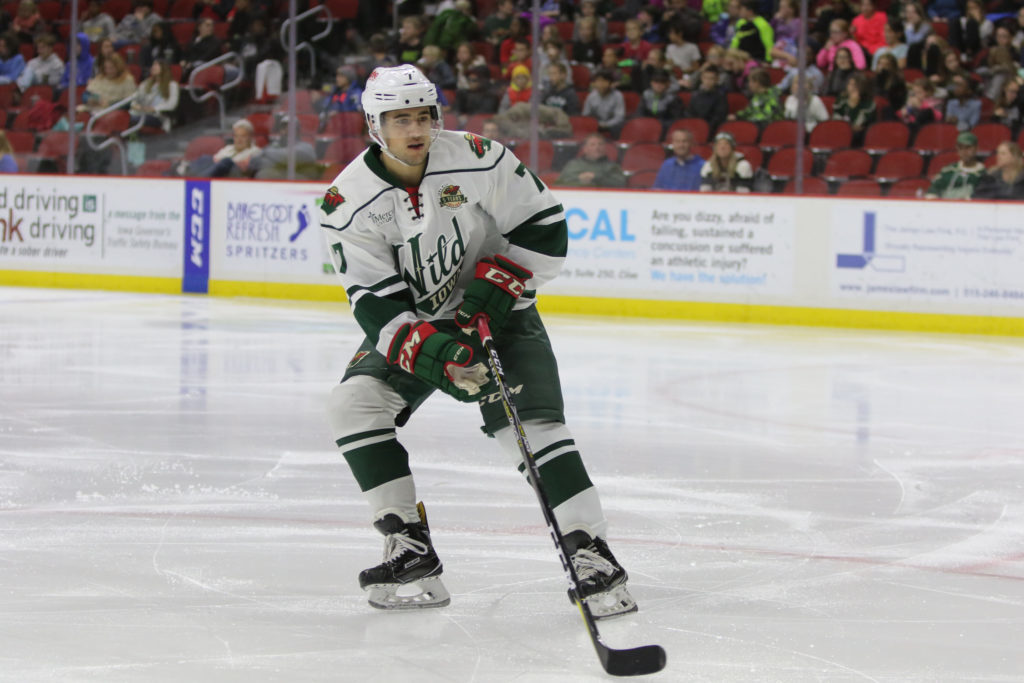 DES MOINES, IOWA – Iowa Wild is proud to announce forward Sam Anas has been named the team’s winner of the IOA/American Specialty AHL Man of the Year award for his outstanding contributions to the Des Moines community during the 2017-18 season.

Throughout his second season with the Wild, Anas has become a beloved and prominent member of the greater Des Moines community. His attitude on and off the ice is unwaveringly positive, which has proven to be contagious throughout the organization and community.

The Potomac, Maryland native has always been quick to volunteer for community events and appearances. This season, he participated in numerous fundraising events for local charities, took part in multiple appearances at central Iowa schools and events, and grasped the opportunity to learn more about Iowa Wild fans and partners.

Anas was already jumping in headfirst before the puck dropped on Opening Night. He joined Iowa Wild partners at Wild on the Green, the Wild’s annual golf tournament, which raised more than $5,000 for The Outreach Program. Shortly afterward, Anas participated in Iowa Corn’s “Farmer for a Day” initiative, during which he visited C & W Farms in Prairie City, Iowa, and met with Gordon Wassner, the lead farmer. In addition to learning more about the life of Iowa farmers, Anas also learned how to drive a combine.

Anas’ community involvement continued into November when he visited Phillips Elementary School for the “Reading Adventures with Dad” event, during which students and their dads visited various classrooms to hear stories read by special guests.

A few weeks later, Anas channeled his inner chef when he spent an evening at 7 Stone Pizzeria. In addition to taking fans’ food and drink orders, he took a shot in the kitchen and learned the process behind perfecting a pizza pie.

Anas’ community involvement was recognized at the Wild game on December 22, 2017, when he was named the Hupy and Abraham Community Player of the Month for November.

In January, Anas and a few of his teammates ventured to the West Des Moines Fire Department to visit with Lieutenant Corry Dolbeer in preparation for Iowa Wild’s Local Heroes Night on Feb. 9. The players learned first-hand what a day in the life of a firefighter is like when they suited up in full gear and conducted a drill, during which they entered a dark house to search for fire victims while masked. They even had the opportunity to tackle a (tamed) fire!

“I absolutely gained a new respect for firefighters. It’s pretty incredible what they do in the circumstances that they’re given,” Anas said afterward.

On Feb. 28, Sam suited up in an apron and demonstrated his serving skills at the team’s 801 Chophouse Celebrity Server event. Sam and his teammates helped raise $2,480 for Tame the Hunger (The Outreach Program) in Des Moines.

To continue his charitable efforts in March, Sam and his teammates helped package 28,000 meals for children, families and elderly suffering from hunger in Iowa at the Wild’s annual Tame the Hunger event.

Anas is now one of 30 finalists for the AHL’s 2017-18 Yanick Dupre Memorial Award, honoring the overall IOA/American Specialty AHL Man of the Year. The league award is named after the former Hershey Bears forward and AHL All-Star who died in 1997 following a 16-month battle with leukemia. The winner of the Yanick Dupre Memorial Award will be announced by the American Hockey League at a later date.

Iowa Wild continues its push for the playoffs with a pair of home contests against Tucson Roadrunners. Puck drop for the first contest is at 7:00 p.m.Friday.