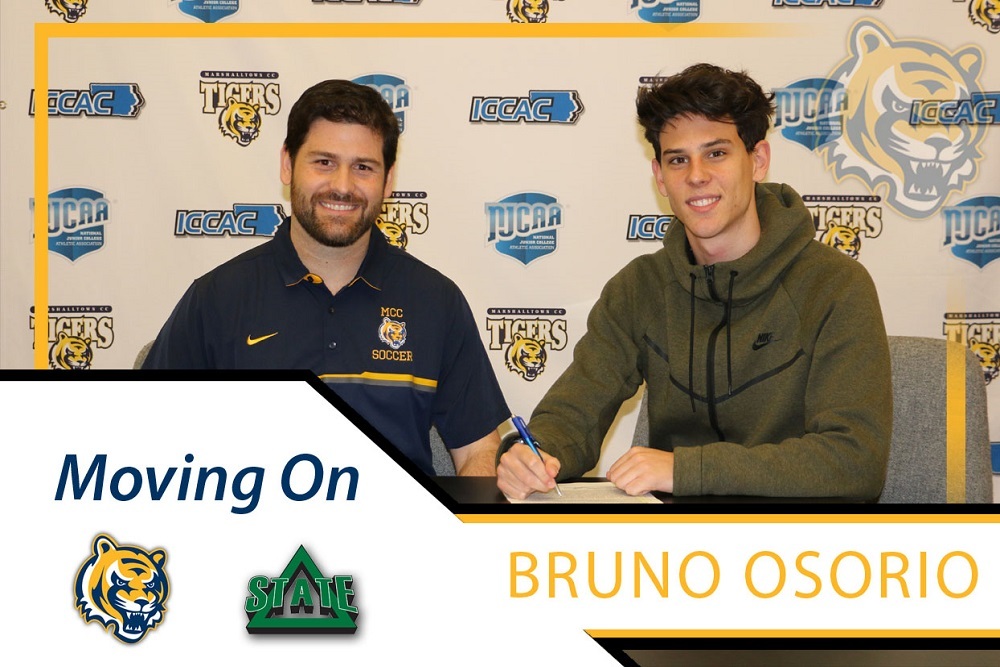 Marshalltown Community College's soccer player, Bruno Osorio has decided to continue his education and playing career at Delta State next year, signing his Letter of Intent last week. Osorio came to Marshalltown by way of El Masnou, Spain where Head Coach Rafael Martinez spotted his talents. Osorio was a productive member of the Tiger soccer team these last two years, playing in 35 games with 13 starts. He was able to find the net ten times in his career with only 24 shots on goal. Playing as a mid-fielder for the majority of his career he also recorded six assists.

"It has been two incredible years here at MCC," stated Osorio. "Coach Rafa has been wonderful and has brought my game to the next level. I want to thank everyone on staff and the instructors at MCC that made my time here special."

"We are very happy that Bruno has found the right program where he will continue to have success in his college career," stated Head Coach Rafael Martinez. "Bruno has evolved tremendously as a student, a soccer player, and as a person throughout his time as MCC. I am very proud of what he has done for this program and I am sure he will be very successful at Delta State. Bruno is a player with high expectations for himself and I know he will do his best to accomplish his goals, we wish him all the best."

Delta State is a member of the NCAA, participating in Division II athletics and a member of the Gulf South Conference. The Delta State Soccer is a program on the rise playing in a tough conference, going 4-13-1 last season. Head Coach Andy Robertson is entering his fifth season at the helm, and trying to improve his team's conference record, falling to 1-10 in the Gulf South Conference in 2017.

Osorio is excited about the move to Cleveland, Mississippi stating, "I can't wait to get down to Delta State and get to work with Coach Robertson. Mississippi will be much different than Iowa so I am excited about experiencing a new culture and being around different kinds of people."