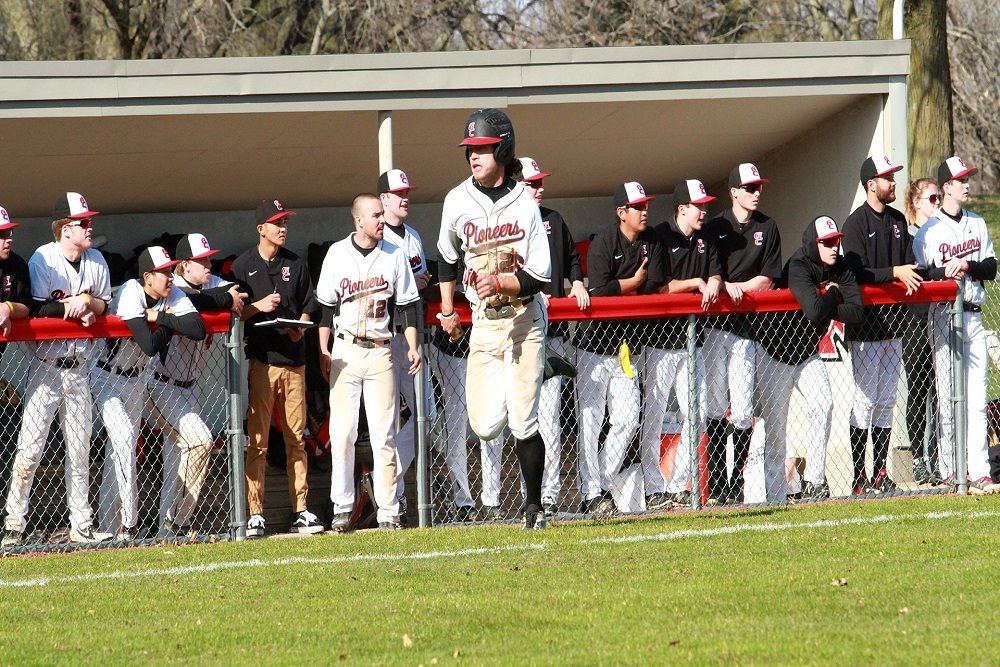 Grinnell College punched its ticket to the Midwest Conference Baseball Tournament for the 10th year in a row Sunday with two wins over Knox College that gave the Pioneers a four-game sweep of the Prairie Fire.

The Pioneers pounded out 17 hits in the opener, including four by Jared Booth '21 and three by Sam Galanek '18, and were aided by a 10-run fifth inning. Galanek had seven RBIs, two shy of Grinnell's school record.

Knox got out to a 3-1 lead with Grinnell's run coming on an RBI groundout by Benjamin Wong '18 in the fourth inning.

Then came the fifth frame that saw Galanek both belt a grand slam homer and also delivering an RBI single. Nathan Zaroban '18 added an RBI double and Brad Weaver '18 and Andrew Shults '19 had RBI singles.

Knox closed within 11-5 before Wong scored on a passed ball and Galanek hit a two-run homer in the seventh to put Grinnell ahead 14-5. Knox then chipped away within 14-13 before the Pioneers shut the door for the win.

Andrew Mack '18 picked up the pitching win, working five innings and striking out seven, and Jacob Morsch '21 tossed an inning and fanned three for the save.

It was more of the same for Grinnell in the second game, as the Pioneers put up 18 hits. Zaroban had five hits, one shy of the school record, and Shults tallied four.

The Pioneers got all the offense they'd need in the first two innings, scoring two runs in each. Carson Gampell '20 had an RBI groundout and Booth an RBI single in the first, and Shults had a run-scoring double and Gampell another RBI groundout in the second.

After Knox came within 4-3, Grinnell got a run in the fourth on Galanek's RBI double and three in the fifth as Zaroban had an RBI double and later scored on a wild pitch, and Quinton McNitt '21 added a run-scoring single.

The Prairie Fire made it 8-5 before Julian Cabrera '19 had a two-run homer in the seventh. After Knox closed within 10-7, Zaroban knocked in two runs with a double in the eighth and added an RBI single in the ninth. Another run was plated on an error.

Morsch, the second of five Grinnell pitchers, got the win.

The Pioneers step out of MWC play next weekend with a game against Luther College and three against the University of Chicago.