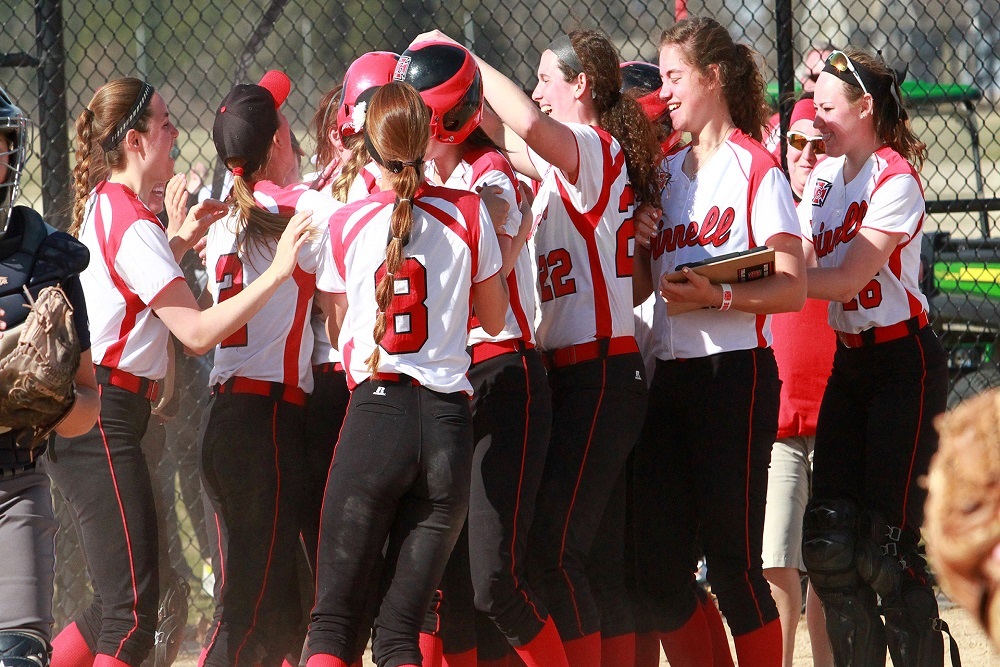 Fighting for a spot in the postseason, the Grinnell College softball team showed it was up for the challenge as the Pioneers qualified for the Midwest Conference Tournament for the first time since 2006 with a pair of wins at Ripon College Sunday.

Grinnell needed just one win to advance to the league tournament for just the third time, and took care of that in the first game with a 6-4 victory. Grinnell followed with a 9-1 win in the second game to tie the school record for wins with 23, and knock Ripon out of tourney contention at the same time. Additionally, Grinnell's Kayla Morrissey '18 became the MWC's all-time hits leader after being tied with Steph Brunette of St. Norbert College at 187 entering the weekend.

The Pioneers will be the third seed for the tourney and face second-seeded Illinois College Friday at Lake Forest College. The top-seeded Foresters play fourth-seeded Cornell College in the other first-round game.

A huge fourth inning paced the 23-10 Pioneers in the opening game, as they broke away from a 2-all tie to go up 6-2. Grinnell, which wraps up its most successful league play slate with a 12-6 mark, got two hits from Leila Bishop-Parise '21 and Flynn Johnson '21. Darice Wheeler '21, who set the school record for hits in a season with 56 over the weekend, tossed a complete-game six hitter, striking out 10 in the process.

Grinnell got out to a 2-0 lead on Johnson's RBI double to left-center in the first and Wheeler's sacrifice fly to left in the second.

After Ripon tied it in the bottom of the second, Grinnell went to work in the fourth. Mya Davis '21 drew a bases-loaded walk, Johnson had a sacrifice fly to left and Ashley Wehrenberg '19 sent a two-run double down the left-field line.

Ripon managed two runs in the fifth, but could get no closer. Wheeler ranks second for pitching wins in a season at Grinnell with 11 and is third in strikeouts at 118.

Grinnell got out to a 7-0 lead in the second game and never looked back. The Pioneers managed 12 hits, including three each by Morrissey and Wheeler and two from Megan Gardner '20 and Emily Jordan '19. Morrissey ranks second for hits in a season at Grinnell with 53. She is also tied with Wheeler atop the runs in a season record board with 46.

Maggie Remus '18 got the pitching win, giving up six hits and striking out one over six innings.

Wheeler gave Grinnell a lead it would never relinquish in the first inning with a two-run homer to left-center. Wehrenberg had a solo homer to left in the second and Wheeler a two-run single up the middle to make it 5-0.

Grinnell made it 7-0 in the fourth as Bishop-Parise had an RBI groundout and Wheeler plated another run via a fielder's choice.

Ripon scored in the fifth, but Grinnell got solo runs in the sixth and seventh on Wheeler's home run to center and Jordan's sacrifice fly to left.

With the weekend performances, Johnson now ranks fifth in program history in both fielding chances and putouts in a season with 239 and 218, respectively.