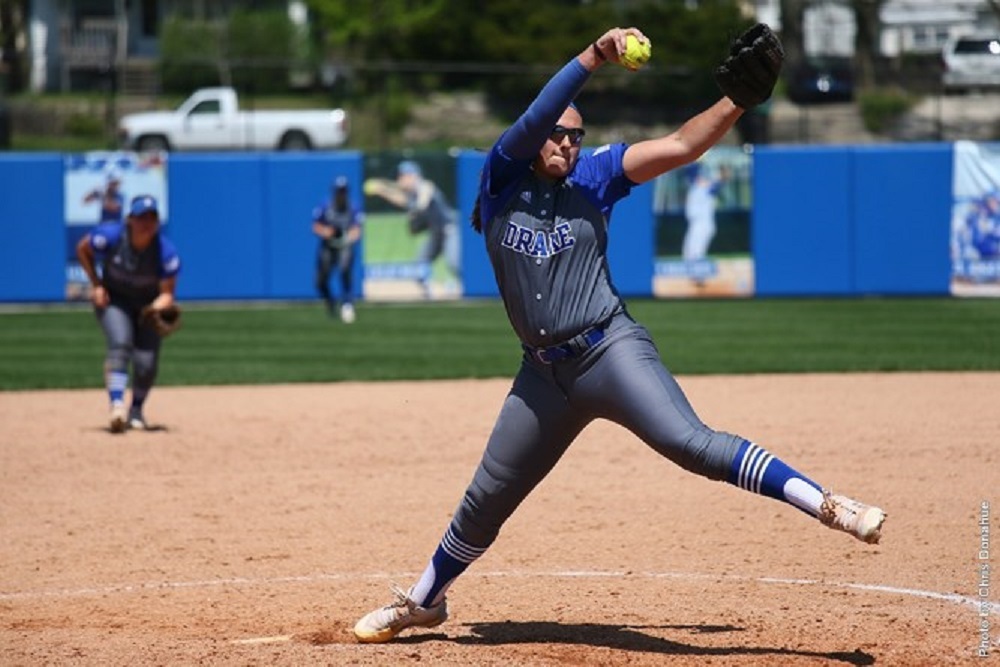 Drake University Athletics issued the following announcement on May 9.

Sophomore Mandi Roemmich (West Des Moines, Iowa) was the first-ever Drake softball player to be named MVC Player of the Year while redshirt junior Nicole Newman (Madison, Wis.) was the MVC Pitcher of the Year for the second time in her career. Head coach Rich Calvert and assistant coaches Tina DeAngelo and Kasey Griffith were tabbed the MVC Coaching Staff of the Year.

Roemmich, who had an outstanding first season and was an All-MVC Second Team selection in 2017, is having a great sophomore season. This year, she leads the team in batting average at.360, triples with two, doubles with 12, walks with 24, runs scored with 34, hits with 58 and slugging percentage at.478. Roemmich, who has started every game at shortstop, also hit her first career home run this season and has driven in a career-high 21 runs. She has a career batting average of.369, which is already No. 2 all-time at Drake. Roemmich blistered MVC pitching with a.429 batting average, which ranked third in the Valley.

Newman, who missed nearly all of 2017 due to injury, has dominated in her return to the circle. This season, she is 19-3 with the second-lowest earned run average in the nation at 0.64 and has struck out 213, which is the second-best total in MVC. This past weekend, Newman moved to No. 1 all-time at Drake and No. 7 in MVC history in career strikeouts with 768. Newman, who won her first MVC Pitcher of the Year award in 2016, is 12-1 with a 0.41 ERA, has 137 strikeouts to 18 walks and tossed two no-hitters against Valley opponents in 2018. She helped at the plate with a.297 batting average, two home runs, three doubles and seven RBI in league play. This is the third time in her career, Newman, who is third all-time at Drake in wins with 61, has been selected to the All-MVC First Team.