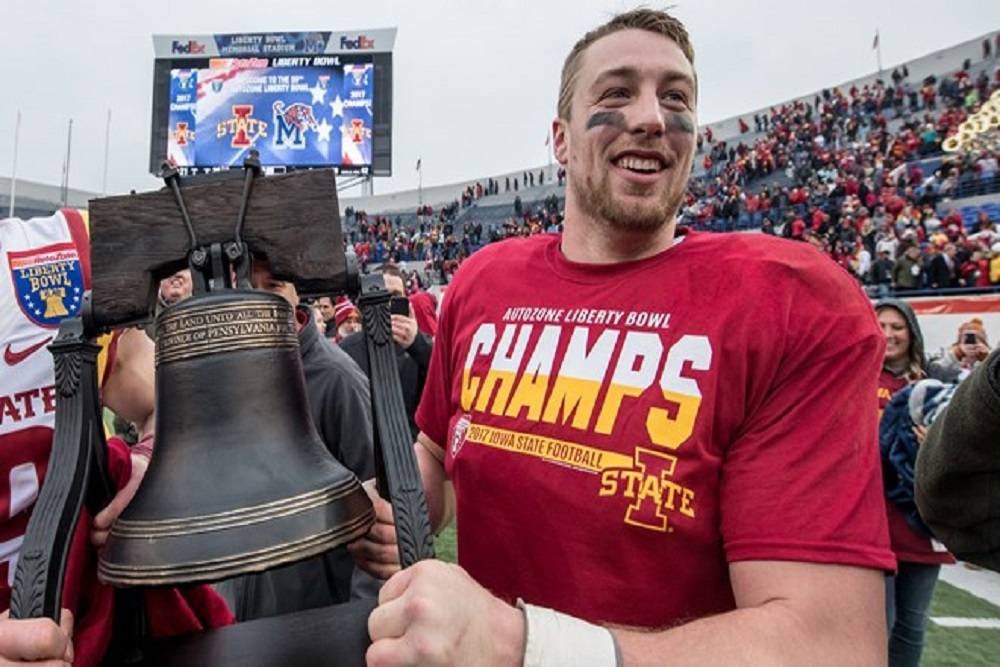 Iowa State football All-American Joel Lanning, who helped raise the standard of the program by leading the Cyclones to an 8-5 record and a victory in the Liberty Bowl, was honored today by the ISU Athletics Department as the of the 2017-18 Iowa State Male Athlete of the Year.

Lanning, a native of Ankeny, Iowa, was a First-Team All-American at linebacker by the Football Writers Association and shared the Pete Taylor MVP Award at the football postseason banquet.

A true three-way player, Lanning had a remarkable senior season, leading the Cyclones into the national rankings for the first time since 2005 and a victory in the AutoZone Liberty Bowl with his uncanny versatility.

The two-time team captain switched to linebacker prior to the 2017 season after spending his first four years in Ames as a quarterback, perhaps making Lanning one of the best comeback stories in college football history.

He didn't play a down in his final game as a junior before head coach Matt Campbell convinced him to try linebacker for his senior season, a position he hadn't played since eighth grade.

His transition was remarkable, leading the Cyclone defense, which ranked 26th nationally in scoring defense (20.9), at the Mike linebacker spot.

Lanning ranked 37th nationally in tackles per game (8.8), registering a team-high four double-digit tackle performances, including a career-high 20 stops vs. Texas. His 20 tackles vs. the Longhorns ranks ninth in school history and tied for fifth among FBS players a year ago.

Lanning was second on the team in sacks (6.0), third in TFL (11.0) and had a fumble recovery and interception on the season.

Lanning first appeared on the national radar with his incredible "Iron Man" performance at Oklahoma on Oct. 7. With Lanning playing 78 total snaps (57 on defense, 13 on offense, eight on special teams), the Cyclones upset No. 3 Oklahoma (38-31) en route to their first-ever win over a top-five opponent on the road.

Lanning finished the Oklahoma game with eight tackles, a sack, a fumble recovery, 35 rushing yards and 25 passing yards in one of the most memorable performances in school history. He was named Walter Camp National Defensive Player of the Week for his efforts.

Lanning, who ranked third on the team in rushing (135) and fourth in passing (47), was utilized by the Cyclone offense in crucial situations throughout the season. He was perfect in "Money" down conversions, going 5-of-5 on third down and 5-of-5 on fourth down conversion rushes.

Lanning is currently pursuing his dream of playing in the NFL, signing a free agent contract with the Dallas Cowboys where he will participate in their training camp beginning in late July.