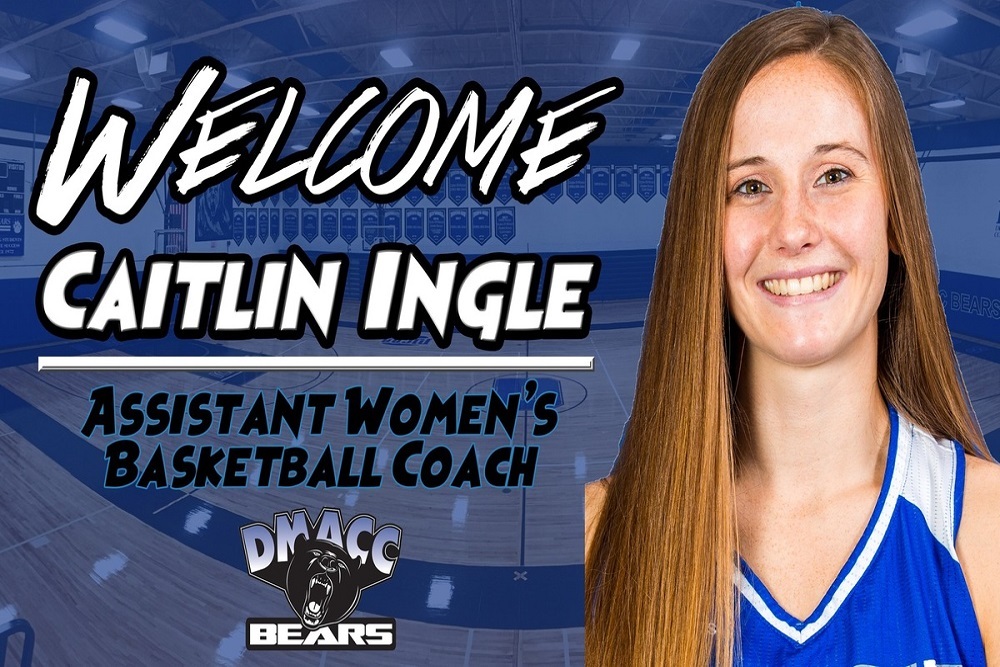 Ingle replaces Ellie Paciorek, who is leaving the staff because she and her husband are expecting their second child and because she has enrolled in the DMACC nursing program. Paciorek played women's basketball at DMACC from 2007 to 2009 and was an assistant coach from January of 2016 to June of 2018.

"Although we are incredibly sad to see Ellie leave, we are excited for this new chapter in her life and career path," DMACC women's basketball coach Steve Krafcisin said.

Krafcisin said Ingle's responsibilities will include every aspect of running a college women's basketball team, including recruiting, on the floor coaching, practice and game plan planning, preseason weights and conditioning, coordinating academic monitoring and supervision of study sessions. Ingle will also serve as the school's assistant housing director and as an assistant to the Student Activities Council Director.

"This is a slam dunk of a hire and we do feel fortunate to have Caitlin join our community," Krafcisin said. "Caitlin has instant name recognition in the Des Moines metro and Iowa and all over the Midwest. And we get a great connection with the Drake women's basketball team and the Drake community."

Ingle was a three-time all-state selection as a point guard for Southeast Polk High School and helped the Rams win the state championship in her senior season.

"Quality point guards, I believe, are gifts from heaven, not made on earth and Caitlin is one of the best the State of Iowa has seen," Krafcisin said. "They have to be leaders and a coach on the floor to orchestrate the team concepts on and off the floor."

Ingle earned a degree in psychology from Drake in 2017. She led the Bulldogs to three postseason tournaments, two National Invitational Tournaments (NIT) and one NCAA tournament. The Bulldogs won 88 games during her career, including an undefeated record at home and an undefeated record in the Missouri Valley Conference (MVC) in 2016-17. She was named the Most Valuable Player on the MVC All-Tournament team in 2017. Ingle is the all-time assist leader at Drake and in the MVC.

"I love the people at DMACC," Ingle said. "Everyone I have met so far has been incredibly welcoming and friendly. It's easy to see that they all love where they are and what they do."

Ingle said she couldn't be more thrilled and grateful for the opportunity to join the DMACC staff.

"Coach Krafcisin has built an extremely successful women's basketball program," Ingle said. "This opportunity at DMACC will allow me to grow in many different areas. Along with coaching, I will also gain experience in student housing and student activities. (Coach Krafcisin) is a great guy who has extensive basketball knowledge. I know that he will help develop and guide me as a young coach."