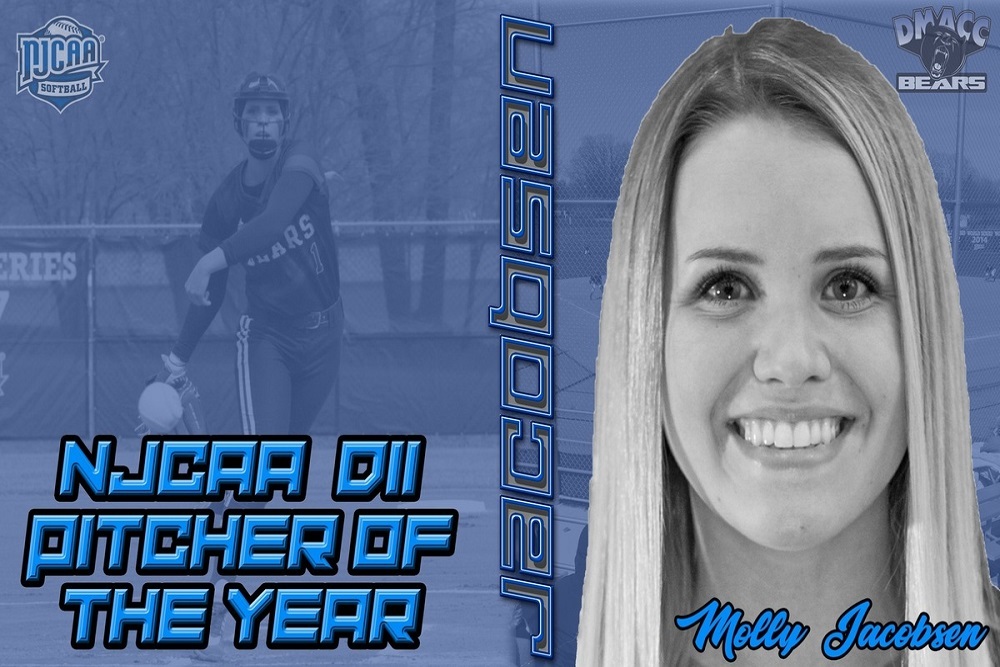 "Molly Jacobsen's stats speak for themselves," DMACC softball coach Bob Ligouri said. "She was a dominating pitcher for DMACC for both years. As a sophomore, she shut down some of the best teams in the country. But more importantly, Molly Jacobsen was a great teammate, team leader, and a leader on our campus. While she earned great success as a pitcher, she never let the attention take away from her team and teammates. She is a very humble young woman and a winner in every sense of the word."

Jacobsen finished the season with a 26-2 record and a 0.47 earned run average. She won her first 25 games and led NJCAA Division II in strikeouts with 312. Jacobsen was second nationally in earned run average and tied for third in wins. She pitched 163.2 innings, allowing 17 runs, 11 of which were earned, on 57 hits. She walked 12 batters and averaged 13.34 strikeouts every seven innings. Her season also included four perfect games and seven no-hitters.

Jacobsen was one of DMACC's top hitters, compiling a.420 batting average. She had a.495 on-base percentage and a.648 slugging percentage. Jacobsen collected 37 hits in 88 at-bats, including nine doubles, a triple and three home runs. She drove in 34 runs and scored 20 runs.

Jacobsen had 10 putouts and 20 assists in 30 chances to finish the season with a 1.000 fielding percentage.

Jacobsen has signed a national letter of intent to attend the University of Mississippi.

"My goal has always been to play (NCAA) Division I softball and getting an opportunity to play in the (Southeastern Conference) is just so awesome," Jacobsen said.