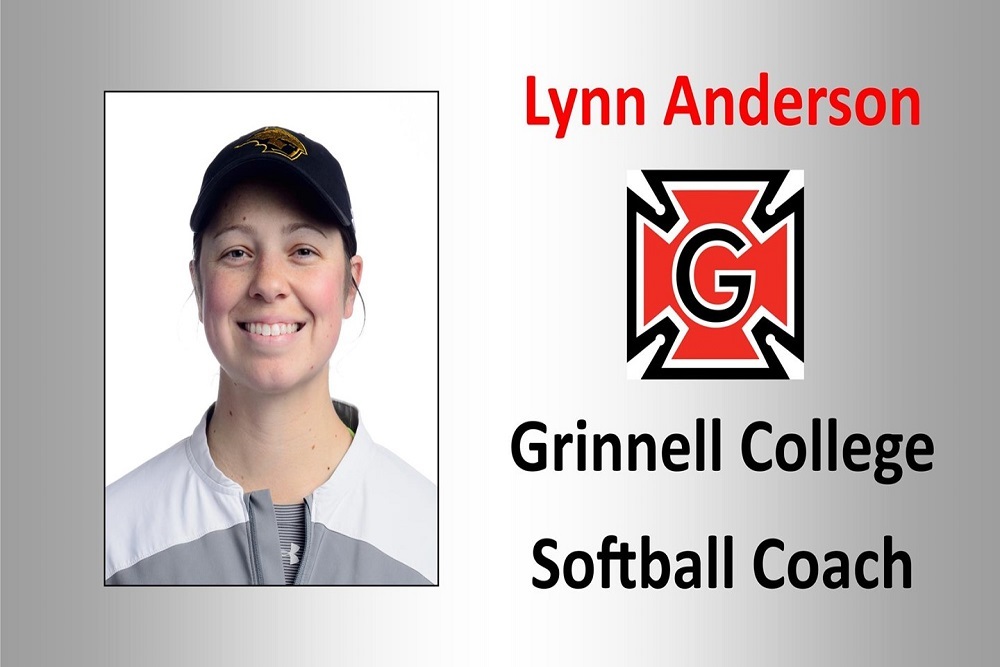 She is bringing those traits with her to Grinnell College, as Director of Athletics and Recreation Andy Hamilton '85 has announced Anderson as the Pioneers' new head softball coach. Besides being the 15th head coach in program history, Anderson will serve as a faculty member and assistant coach in a second sport.

"We are excited to have Lynn begin as our softball coach at Grinnell," said Hamilton. "During the interview process, Lynn impressed people from all over campus and she certainly captivated our departmental search committee. Her background of progressive softball coaching experience at several playing levels should lend well to developing our players and growing our program. With educational training in sociology, gender and women's studies and athletic administration, Lynn is also poised to mature as a faculty member."

Anderson, a former captain of the University of Wisconsin-Madison softball team, comes to Grinnell after five seasons as an assistant coach at UW-Oshkosh. Working primarily with hitting and outfielders, she helped the Titans to two consecutive NCAA Division III National Softball Tournament appearances and a regional title in 2017. The Titans compiled a 138-63 record during Anderson's tenure and had 14 All-Great Lakes Region, 26 All-Conference and 50 Conference Scholastic Honor Roll selections.

Other coaching duties have included instructing at the Milwaukee Brewers Summer Camp, a volunteer coaching post at UW-Madison and graduate assistant coaching job at Valparaiso University.

As a player, Anderson was a walk-on who went on to letter four years while playing shortstop for the Badgers. She was a team captain in 2008 and voted the team's Defensive Player of the Year. She led the Badgers in home runs (nine), total bases (68), slugging percentage (.489) and assists (118) in 2008 and ranked second in batting average, on-base percentage, runs scored, hits and RBIs.

She is tied for fourth on the Badgers' record board for single-season home runs and fifth in career assists with 311. Anderson was part of the 2005 Wisconsin squad that made the program's third NCAA Division I National Softball Tournament appearance, and was one of 34 women in the country invited to the USA Baseball Women's National Team Development Program in 2014.

Anderson graduated from UW-Madison in December 2008 with a double major, earning a bachelor's degrees in sociology and a criminal justice certificate. She gained her master's degree in sports administration from Valparaiso in December 2011, graduating with highest distinction.

"I am thrilled to join the Grinnell College family," said Anderson. "First, I want to thank Darryl Sims, Vicci Stimac and Scott Beyer for the wonderful opportunity over the past five years at UW-Oshkosh. I will miss the student-athletes, but wish the softball program and athletic department all the best in their endeavors. Also, thank you to Mike Latham, Andy Hamilton and the rest of the hiring committee for this amazing opportunity.

"Grinnell is a world-renowned college - nationally ranked among the best liberal arts colleges, best value and most innovative," she added. "To be a part of something as special as Grinnell College is an honor. I was thoroughly impressed with their holistic approach to education and athletics. It aligns perfectly with my goals and I am fortunate to lead a group of amazingly talented young women. I am eager to begin the journey with them and I look forward to mentoring students, working with another group of young women in my second sport responsibility and bringing Pioneer softball to a level of national prominence."

Anderson inherits a Pioneer team that set a school record for wins with 24 and qualified for the Midwest Conference Tournament for the first time since 2006. The Pioneers broke 14 individual career, 16 individual season, eight individual game, 13 team season and five team game marks in 2018 and boasted the program's first-ever All-American.