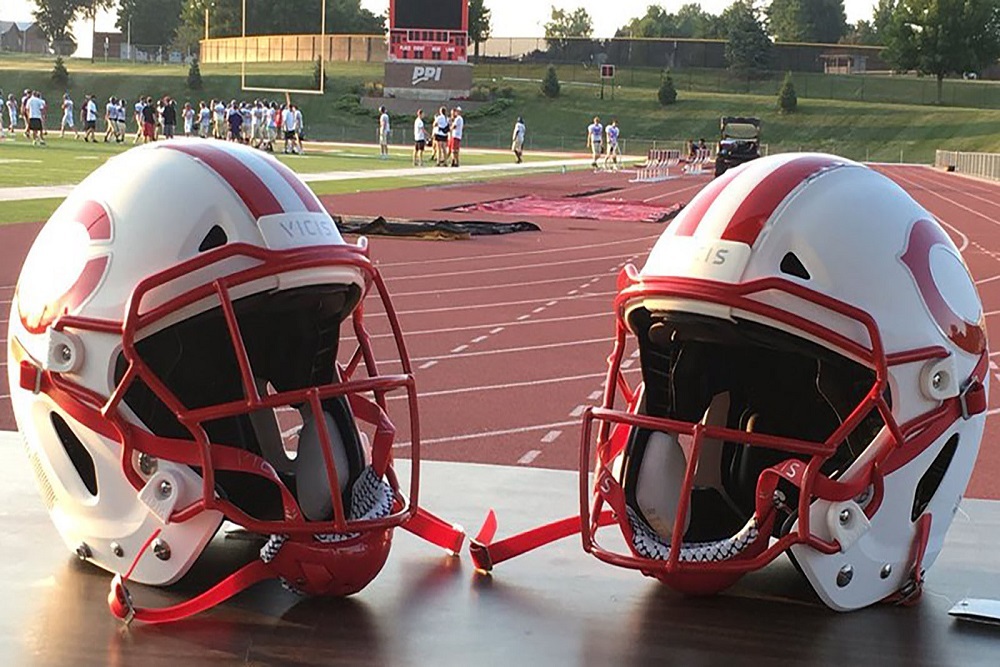 The Dutch are trying out a pair of innovative Visis helmets. Central is the first Division III Iowa college to test the helmets that will be used by all 32 NFL teams this year. | Source: Central College

In part of its ongoing efforts to promote player safety and reduce head injuries, the Central College football team is piloting a pair of Vicis helmets this fall.

The Vicis Zero 1 was the top-performing helmet in the Virginia Tech University helmet ratings and the NFL/NFLPA helmet laboratory performance testing for 2018. In 2017 when the Vicis helmets debuted, 18 NFL teams used them. All 32 NFL teams are using the helmets in 2018.

Central a leader in promoting athlete safety—Players at several major universities are also using the helmets this year but Central is the first NCAA Division III college in Iowa to do so. Last year, Central became the first college or university in the U.S. to serve as a pilot program for an innovative concussion diagnosis testing tool utilizing air bag sensors, developed by Safety in Motion, Inc. (SiM) of Northville, Mich.

"That says a lot about Central," coach Jeff McMartin said.

It's an ongoing commitment.

"We continue to look at putting our players in the best and safest equipment available," McMartin aid. "That is always changing. We want to make sure we have all the information available and find out what's best for Central. We've added Vicis helmets to our options."

McMartin is intrigued by the helmets.

"If you look at the data, Vicis is eye-catching," he said. "We want to try it and see for ourselves. We feel like this company is taking helmets in a new direction."

Unlike traditional football helmets, the Zero 1 features a soft outer shell and an underlying layer of columns that bend on impact and is able to mitigate collisions from multiple directions. Pads inside the helmet are molded to fit an athlete's head, eliminating the need for shims and air bladders.

The helmet was named one of the 25 best inventions of 2017 by Time magazine and Inc. magazine listed the company as one of the year's top eight most innovative startups.

If this year's trial is encouraging, McMartin hopes to purchase additional helmets for next year's squad.

Beyond his focus on protecting his own players, McMartin is eager to promote safety within the sport. He's a member of the board of trustees for the American Football Coaches Association and reducing head injuries is an organizational priority.

"Player safety is probably the No. 1 issue facing the game of football," he said. "There's a lot of good information out there but there's also a lot of misinformation. We want to continue to make sure the game is safe.

"It's a great game. We're excited about the direction the game is going in terms of fan interest, player performance and level of excitement. We want to make sure the game is around a long time and continues to get safer."