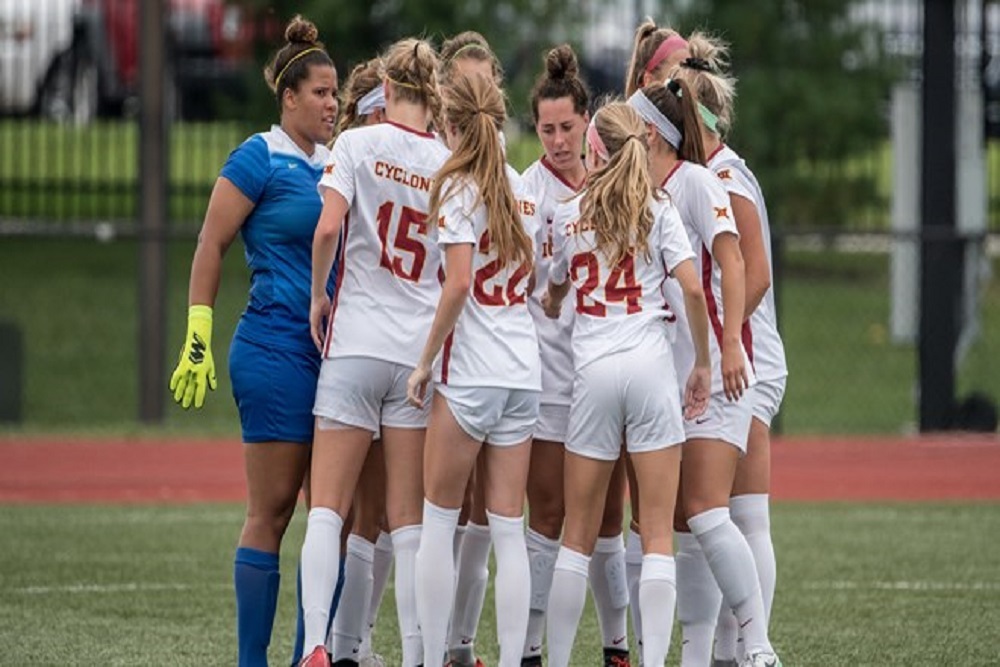 1. The Iowa State Soccer team is headed to the Boilermaker Challenge Cup this weekend to face a pair of Big Ten opponents in West Lafayette, Ind. The Cyclones open by facing No. 19 Northwestern in a neutral site contest on Friday at 3 p.m. CT. Iowa State will then take the pitch vs. Purdue on Sunday at 2 p.m. Both matches will be played at Folk Field and broadcast by BTN2GO.

2. The Cyclones are coming off a 1-1 opening weekend, splitting a pair of contests at the Cyclone Sports Complex. Iowa State opened with a 2-0 victory over South Dakota State before a 2-1 double overtime loss against Missouri on Sunday. Iowa State improved upon its result against both opponents from a season ago.

3. The ISU offensive attack looked up for the challenge on the opening week of the season, out-shooting both SDSU and Missouri. Courtney Powell paces the Cyclones with seven shots, including four on goal. Klasey Medelberg, Kasey Opfer and Emily Steil all tallied five shots over the first two matches.

4. Powell scored the first goal of the 2018 season, striking in the 32nd minute off an assist from fellow sophomore Kassi Ginther to give Iowa State the lead over South Dakota State. Senior Emily Steil then slammed the door shut, placing a penalty kick perfectly in the upper 90 in the 61st minute after an SDSU hand ball in the box.

5. Goalkeeper Dayja Schwichtenberg and the Iowa State backline were excellent in the season-opening shutout. Schwichtenberg tallied five saves in the contest, while the defense, anchored by center backs Jordan Enga and Marin Daniel made sure the Jackrabbits chances were few and far between. Schwichtenberg notched the fourth shutout of her career.

6. Iowa State was unable to complete a 2-0 weekend, falling 2-1 to Missouri on Sunday in an overtime heartbreaker. The Cyclones looked up for the challenge, out-shooting the Tigers 17-15 while enjoying a 9-7 advantage in shots on goal. ISU sent the game to overtime with an equalizing header by Opfer off a perfectly played ball in by Hannah Cade in the 80th minute. However, misfortune struck in closing moments of the game, as ISU fell on an own goal.

7. The Cyclones looked strong in an exhibition tune-up at Drake on Saturday, winning the friendly, 2-0, behind goals from Courtney Powell and Emily Steil. Tony Minatta's squad looked in control against the 2017 Missouri Valley Conference regular season champions, creating a bevy of offensive chances.

Iowa State and Northwestern have met just twice on the pitch prior to Friday's match. The Cyclones have had the better of the Wildcats, winning both previous contests. The two teams first met on Sept. 1, 2000 in a 3-1 Iowa State victory in St. Paul, Minn.

The two programs have not met since Sept. 3, 2006, when Iowa State traveled to Evanston for an early season non-conference battle. The Cyclones were out-shot, 17-5, but got a goal in the 12th minute from Leslie Hill and were able to hold on for a 1-0 shutout win. It marked Iowa State's first victory of the season.

The Cyclones will battle yet another rarely-faced opponent at the Boilermaker Challenge Cup this weekend, having only previously faced the hosting Purdue Boilermakers once in program history. Iowa State won the lone match-up, 1-0, on Sept. 2, 2005.

The two teams met in Ames, Iowa for the first game of the Big 12/Big Ten Challenge. Iowa State came away with its for goal and first victory of the 2005 season that would go on to be one of the best in school history. Sophomore Stephanie Kaphingst broke up a 0-0 tie with the game-winning goal in the 77th minute to send the Cyclones past the Boilermakers, 1-0.

Iowa State would go on to finish the 2005 season 11-7-3, including 6-3-1 in conference play, and advanced to the NCAA Women's Soccer Championship for the first time in program history.