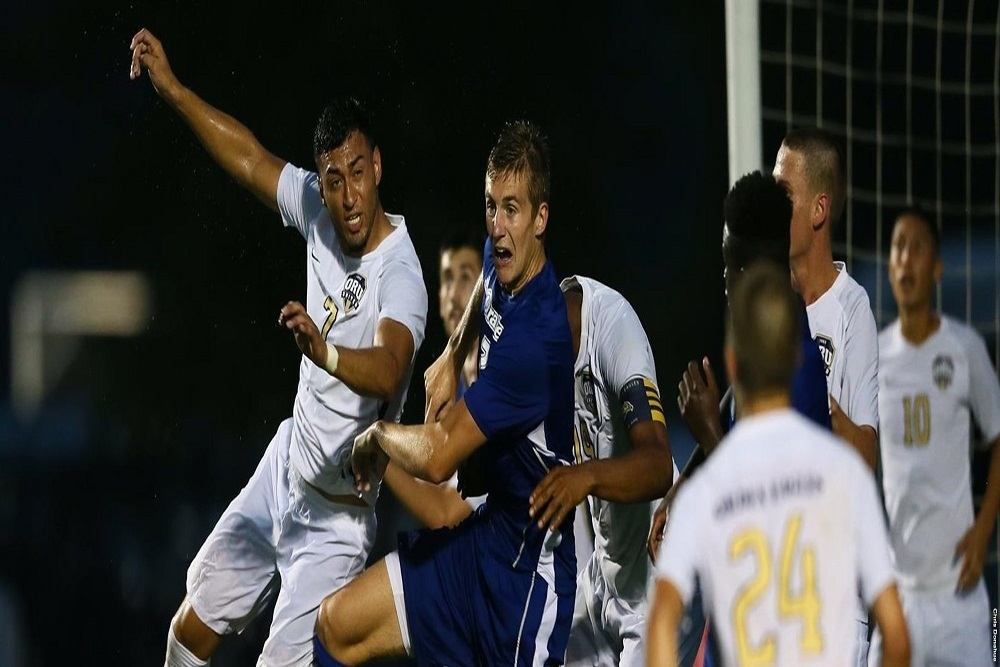 Newcomer Lucas Bartlett (Overland Park, Kan.) headed in a goal in the 87th minute (87:19) for the Drake University men's soccer team in a 2-1 upset win of No. 9 Butler Monday night in Indianapolis, Ind.

Drake (1-1-0), which evened the road match in the 80th minute (80:45) with a goal by redshirt senior Paul Ciszewski (Germantown, Wis.), beat the highest ranked opponent in program history since the 2009 Bulldogs team upset No. 13 Ohio State, 1-0, in the first round of the NCAA Tournament. Butler (0-1-1) won the only other previous meeting in 2015 between the two teams before Monday by a score of 4-0.

Bartlett, a redshirt sophomore, who transferred from Loyola and is the younger brother of former Drake standout Alec Bartlett (2013-15), went up top and headed in a corner kick from fellow newcomer, redshirt junior Cole Poppen (Ankeny, Iowa), a transfer from Tulsa.

Ciszewski's goal came after redshirt junior Alex Peterson (Duluth, Minn.) blasted a ball from 20 yards out that Ciszewski redirected past the Butler goalkeeper, Gabriel Gjergji. Drake's goalkeeper and another transfer, junior Jared Brown (Aurora, Ontario), who joined the program after two years at Florida Gulf Coast, earned his first win in between the posts for the Bulldogs.

"A well-deserved win against the No. 9 ranked team in the country," said Drake head coach Gareth Smith. "While we are delighted with the result, we are equally pleased with the collective performance. We schedule these games because we wanted to challenge ourselves against the best and tonight we showed real character, quality and a winning mentality. From an attacking perspective, we were pleased with our ability to be effective in the final third and create chances throughout the game. On the defensive side we were tactically very well organized and executed our roles and responsibilities very well. Collectively we showed real steal and commitment to defend and limit Butler's attacking threat. We are proud of the guys and look forward to building on tonight's performance and result."

Following Monday's road contest, Drake hosts UIC Friday at the Cownie Soccer Complex. First kick with the Flames is set for 5 p.m. and the match will be broadcast on ESPN+.