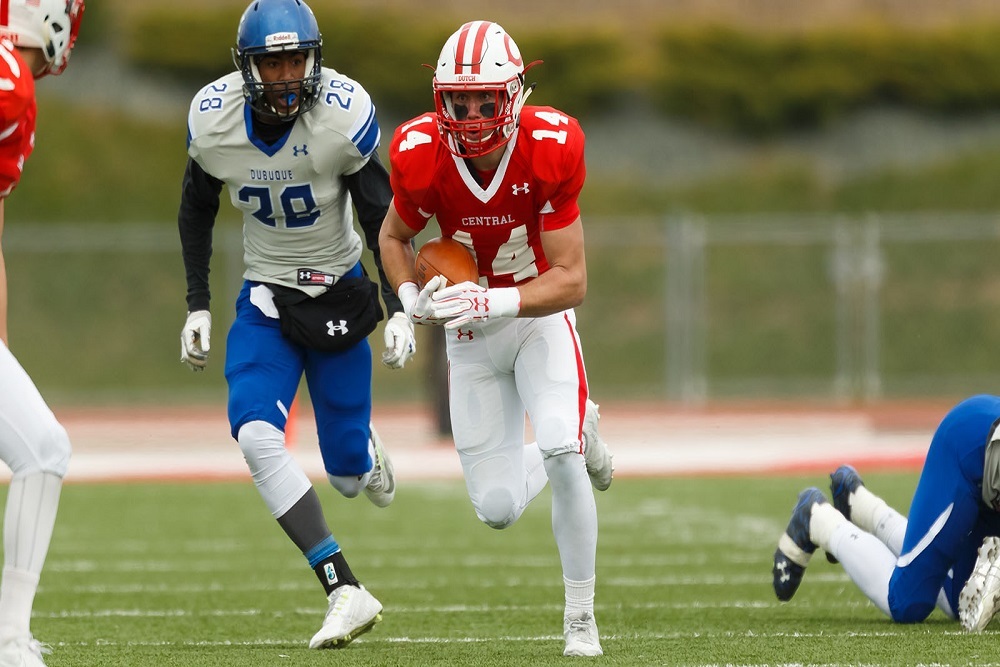 It's the season opener for a youthful Central College football team but coach Jeff McMartin is looking for a mid-season performance level Saturday evening in a first-ever meeting at the University of Northwestern-St. Paul (Minn.).

Game time is 5 p.m. at Reynolds Field in St. Paul, Minnesota. Central returns eight starters from last year's 7-3 squad that placed second in the Iowa Conference while Northwestern was 6-4.

McMartin said Northwestern has a fundamentally sound club that thrives on opponent's turnovers and missed scoring opportunities, exactly the kind of miscues that can surface in a young club's season opener.

"The key for us is execution, on both sides" he said. "Do your job defensively, be where you need to be, compete, play hard and keep working to get the ball back. Offensively, execute our offense, don't get outside of that, take care of the ball, and when you're in the in the Red Zone, come away with points. And on special teams, don't beat yourself, make some plays, do your job and keep the field position where we can be effective."

On the air and online—The Voice of the Dutch, Trevor Castle, returns to call Saturday's action on KRLS-FM (92.1), with retired Central defensive coordinator Don De Waard providing the color. The KRLS pregame show will air at 4:35 p.m. The broadcast can also be accessed through www.kniakrls.com or directly at rdo.to/krls. It's also accessible via mobile device with the KRLS app available through iTunes and other outlets.

On Mondays, Castle plays host to coach Jeff McMartin on the KRLS Coaches' Corner at 7 p.m. Those broadcasts are also available on demand through www.kniakrls.com. This past Monday's program can now be accessed and features Dutch offensive coordinator Ryan Maiuri and defensive coordinator Nick Mulder.

Familiar coaches but new roles—McMartin and second-year Northwestern coach Matt Moore were in different roles when they last met on the field. In 1993, Moore was a freshman defensive lineman at Illinois Wesleyan University and McMartin was his position coach. Moore later transferred to Northwestern, where he was an all-conference defensive end. He was Northwestern's defensive coordinator for 10 years before taking over as head coach last season.

McMartin, a 1990 Central graduate, enters his 15th season at his alma mater with a 108-38 (.739) record and ranks 13th in career winning percentage among active coaches in the NCAA Division III. He's just the 11th Division III coach ever to serve on the American Football Coaches Association board of trustees and has served since 2015.

The Eagles' defense shines at safety. Senior Nick Swore was a second-team d3football.com all-America pick last year. He had seven interceptions and 56 tackles.

Junior Taylor Lindahl is back at quarterback. He completed 115 of 241 passes for 1,231 yards, six touchdowns and nine interceptions.

"Northwestern is a very good football team," McMartin said. "They're well-coached. It's a team that does a really good job of not beating itself and plays off your mistakes."

It's a balanced offense, he said.

"They've been effective running the ball," he said. "Their tailback has been really good, they've got a returning quarterback and they've got some talented wide receivers.

"Defensively, their secondary is all intact from last year. They're very active up front. They move around a lot and make you stay disciplined."

Young lineup—There could be as few as five senior starters for Central Saturday, based on the depth chart McMartin released.

Fans eager to know which of three talented senior running backs will line up for the first snap will have to wait until Saturday to find out. Pat Gray (West Des Moines, Waukee HS), Donny Groezinger (Sulphur Springs, Texas; Eastland, Illinois HS) and Nathan Fitzgerald (Elkader, Central HS) are listed as co-starters. Regardless of who starts, count on them all seeing action and being utilized in multiple ways.

It's no surprise that sophomore Blaine Hawkins (Ankeny) will start at quarterback. He took over as starter for the final six games of his rookie year and promptly became Central's leading passer and rusher. He completed 116 of 186 throws for 1691 yards and 18 touchdowns with three interceptions while rushing 86 times for 593 yards and nine scores. Tanner Schminke (sophomore, Boone) moved back to quarterback from defensive back and serves as Hawkins' backup. He'll also spend time at wide receiver.

Tylor Newhouse (senior, Marion, Linn-Mar HS) is the lone senior starter in what appears to be a capable offensive line and McMartin is quietly encouraged by the progress he saw in the preseason at receiver, a clear area of concern. Sophomores Erik Knaack (Reinbeck, Gladbrook-Reinbeck HS) and Tylor Obermeyer (Papillion, Nebraska, Papillion-La Vista HS) will get starts there.

"Early in camp, we weren't catching the ball the way we needed to," McMartin said. "But in our scrimmage Saturday we saw some really great catches. We're starting to look like our old selves. It's a matter of finding the combinations. All of our quarterbacks are doing a good job of putting the ball where it needs to be thrown and that's been helpful, too."

Meanwhile, a junior and two sophomores are the listed starters in the defensive line.

"I feel like we've gotten better each day and we want to continue to make good strides," McMartin said. "Our defensive line is very young, but I think there's a lot of talent in it. We need our linebackers to be playmakers but we also need the people around them to do their jobs, too."

The kicking game is in good shape with a pair of all-conference returnees in junior place kicker Jon Alberts (Huntley, Illinois) and senior punter Tyler Bryant (Donnellson, Central Lee HS). Also back is punter Cam Kiner (senior, Craig, Nebraska, Oakland-Craig HS), who was the Dutch starter in 2016 but missed last season due to injury.

Help from the minors—McMartin cautions that Central's lineup is far from settled and said he likes some of the options he has available.

"There's still a lot of competition out there," he said. "Our players know that we're evaluating them every day. And we've got a talented group of younger players to go along with our veterans. In some ways, it's kind of like Major League Baseball in the sense that a guy could move up or down on a day's notice based on our health at a position or how guys are performing. This year I've been referring to our scout team as triple-A and I've told our players that because I don't see anybody as a guy who is just there to run the other team's stuff. I see them being developed to put on the field. They also know there's enough competition they can go up or down and if you're not on the two-deep now it doesn't mean you won't be on the two-deep at some point."

Notes—Central is 8-6 in season openers under McMartin…This is Central's first football game with a team from the UMAC. Founded as the Twin Rivers Conference in 1972, the league became affiliated with Division III in 2008. It has nine full-time member schools with four associate members. MacMurray College (Ill.), which is a league member only in football, is the preseason favorite…Central has just four home games this year and doesn't debut at Ron and Joyce Schipper Stadium until Sept. 15 in the American Rivers Conference opener with Luther College…A Central football program strength continues to be the number of former Dutch players on the coaching staff. Ten staff members are Central grads. But Central players are also benefiting from some outside expertise this year. In addition to offensive coordinator Ryan Maiuri, a Lakeland College (Wis.) graduate who is in his fourth season with the Dutch, wide receivers coach Logan Emendorfer and cornerbacks coach Austin Mercer have joined the staff. Emendorfer played at the University of Wis.-Platteville, where he was a team captain, and Mercer graduated from the University of Mount Union (Ohio), a perennial Division III power.