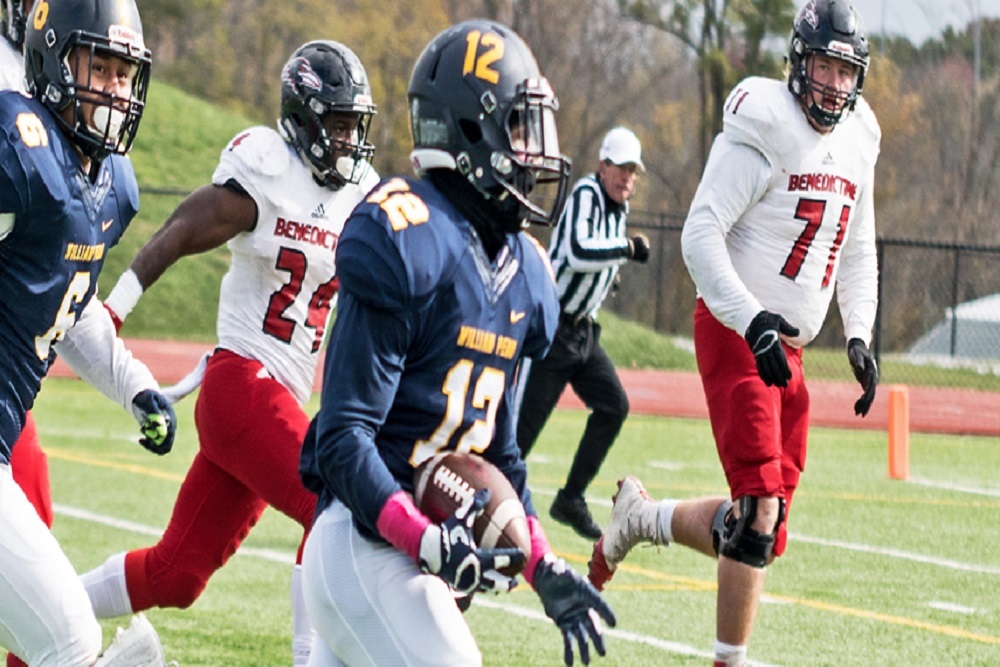 The William Penn football team entered the win column Saturday and did so in a commanding fashion, shutting out Missouri Valley 42-0 in a Heart of America Athletic Conference North-South Crossover game.

In a battle of two programs receiving votes in the NAIA's preseason poll, the Statesmen (1-2) dominated from start to finish. In the process, the navy and gold posted their first shutout since taking down Waldorf 65-0 on October 21, 2013.

After two disappointing weeks on the gridiron, the hosts were in need of a win and came out with a renewed energy in all areas of the game.

The defense stepped up first, taking the Viking offense off the field with a quick three-and-out. Not to be outdone, the offensive crew went 56 yards on just seven plays in its first possession. Tyler Wood (Jr., Newton, Iowa, Education), returning from an opening-week injury, capped off the drive by finding Malcolm Stephens (Fr., Houston, Texas) in the corner of the endzone for a 14-yard score just 4:40 into the evening. Wood was 2-for-5 passing for 16 yards.

MVC (0-2) then produced its best possession of the first half, moving all the way to the WPU 24-yard line. Fortunately, the Statesmen defense stiffened, forcing a 41-yard field goal that sailed wide right.

William Penn went back to work with the pigskin, and headlined by nine rushes by Amos Johnson (Sr., Rock Island, Ill., Mechanical Engineering), doubled its advantage to 14-0 when Johnson plunged in from a yard out on the first play of the second period. The senior fullback finished fourth on the squad with 53 rushing yards.

The contest continued to trend upward for the hosts with another quick defensive stop and a lengthy offensive drive. The victors march 62 yards over a span of 6:32 with Wood finding paydirt on a one-yard rush. The junior recorded 74 rushing yards Saturday; overall, William Penn picked up 365 of its yards on the ground.

A plethora of big individual efforts were posted by the defenders, but none bigger than that of Detorien Rawlinson (So., York, S.C., Psychology) on the Vikings' ensuing possession. Rawlinson read the sideline pass play to perfection, stepping in front of the toss, intercepting it, and returning it 27 yards for a 28-0 Statesmen advantage with 6:04 still remaining in the opening half.

Each team moved onto the opposition's side of the field in the next few possessions, but neither could punch it in. The defensive backs then stole the show with Ray Watson (Jr., Apple Valley, Minn., Physical Education) picking off an MVC throw and one of his counterparts doing the same in the endzone.

As aforementioned, every cog of William Penn's machine had success Saturday, including special teams. In fact, the plays were back-to-back.

First, following another quick exit of the Viking offense, Brandon Davis (Jr., Atlanta, Ga., Sports Management) hauled in a punt and slipped by all 11 potential tacklers for a 48-yard return touchdown and a 35-0 advantage.

Hunter Behm (Jr., West Haven, Utah, Mechanical Engineering) then kicked off, but the Missouri Valley returner found an opening and bolted out towards midfield. With only Behm to beat, it appeared the visitors might get on the board via a special teams explosion, but WPU's placekicker showed tackling is not just for the defense. He squared up, hit the ball carrier straight on, lifted him, and then drove him to the turf, much to the uber delight of his teammates and Statesmen Nation.

Missouri Valley finished its second-to-last drive of the matchup just two yards away from the endzone. The navy and gold finally put a bow on the victory as second-string quarterback Alex Crehan (Jr., Troy, Ill., Business Management) ended a 10-play, 98-yard drive with a six-yard scoring scamper. The junior tallied all 90 of his rushing yards in his team's last full drive (long of 67 yards), matching Ben Sherman (Fr., Troy, Pa., Elementary Education) for the team lead.

A pair of pass breakups by Cortez Eatmon (Fr., Jasper, Ala., Biology) on the last MVC drive helped to secure the shutout.

"I thought the real William Penn team showed up tonight," Head Coach Todd Hafner said. "We played so inspired; it was fun to be a part of. We were enthusiastic, we were focused, and we played tough. We needed to change our attitude about being a team and again our players responded to that."

"Offensively and defensively, that is as good as we have played in a very long time and we think we can play even better," Hafner added. "We need another great week of preparation and need to show up in Olathe ready to compete hard and win our second game of the year."

Next Up: William Penn travels to Olathe, Kan. next Saturday to face MidAmerica Nazarene in another crossover game at 2:30 p.m. It is the second of two games in which WPU will be on ESPN3.