GRAND VIEW UNIVERSITY: Vikings drop one spot in Coaches' poll to no. 11 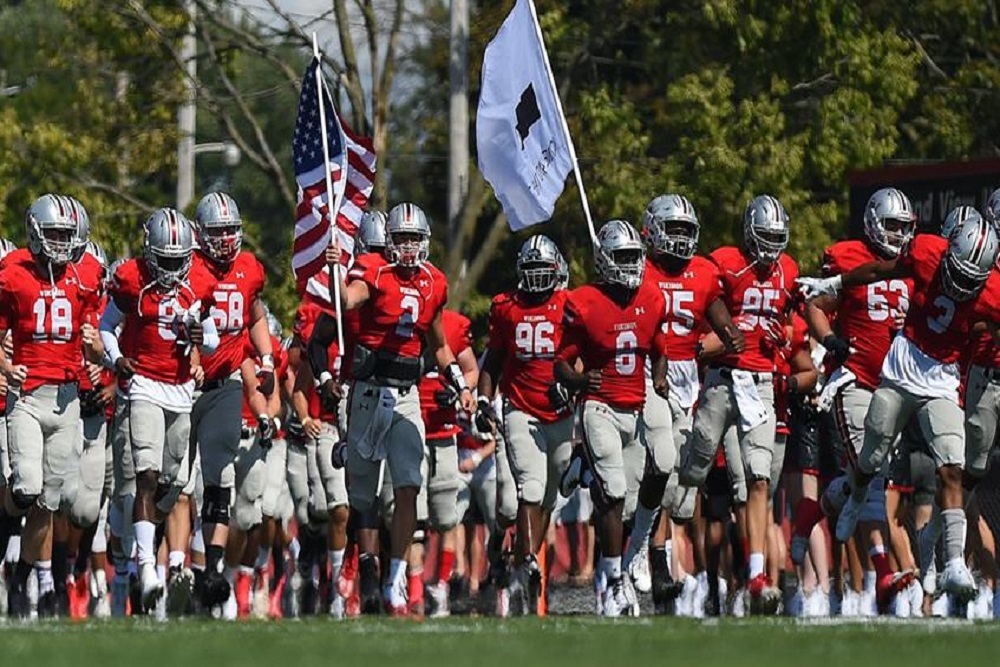 The Grand View University Viking football team dropped one spot to No. 11 in the third iteration of the NAIA Football Coaches' Top-25 Poll.

The Vikings, who are 2-1 overall, defeated the Central Methodist Eagles 47-27 in their home opener.

Ben Ferkin (SO/Waukee, IA./ Waukee HS) has directed the offense well for the Vikings. Ferkin improved his season completion percentage to 69.7% and thrown for 5 touchdowns, while only throwing 1 interception. Jerry Lowe (JR/Tama, IA./ South Tama HS.) ran well behind a dominant offensive line against the Eagles as he ran for 8.6 yards/carry as well as 2 touchdowns. Gabe Richey (JR/Panora, IA./ Panorama HS) also had a standout performance as he caught 3 touchdown passes up against the Central Methodist secondary.

The Viking defense continues to stymy opposing teams on the ground. Grand View ranks No. 1 in the country in rushing defense allowing 41.7 yards/game. It continues to make plays in the secondary as well. The Vikings added 2 more interceptions against the Eagles to bring their total to 9 picks on the season, which is the most in the NAIA. Ben Slavens (JR/Bettendorf, IA./ Pleasant Valley HS) continues to wreak havoc on the field averaging 9.7 tackles/game.

Grand View has also benefited from their special teams players. Brady Jansen (JR/Johnston, IA./Johnston HS) won Heart Special Teams Player of the Week last week and currently ranks No. 2 in total field goals with 6 and No. 3 in scoring/game at 9.3 points. Grant Sherman (SR/Saydel, IA./ ICCC) flipped the field multiple times and pinned the opponent inside their own 10 twice in their last game against Central Methodist. He currently ranks No. 10 in punt yards/attempt at 42.3 yards.

Saint Francis (Ind.) was a unanimous pick at the top spot, which it has now held for the last three polls this season. Evangel, who defeated the Grand View earlier this season and is now 4-0, jumped the Vikings in the standings and took the No. 10 spot. Other Heart of America teams that made the Top 25 Poll were: Baker (12) and Benedictine (15). The full rankings can be seen below.

The Vikings have a bye week for September 22nd and will return to the field on September, 29th against the Missouri Valley Vikings in Marshall, Missouri. Missouri Valley is are 1-2 currently. They are scheduled to play the Peru State Bobcats this upcoming Saturday. Check back with gvvikings.com for a complete recap and follow the Vikings on social media (@VikingAthletics) for in-game updates.