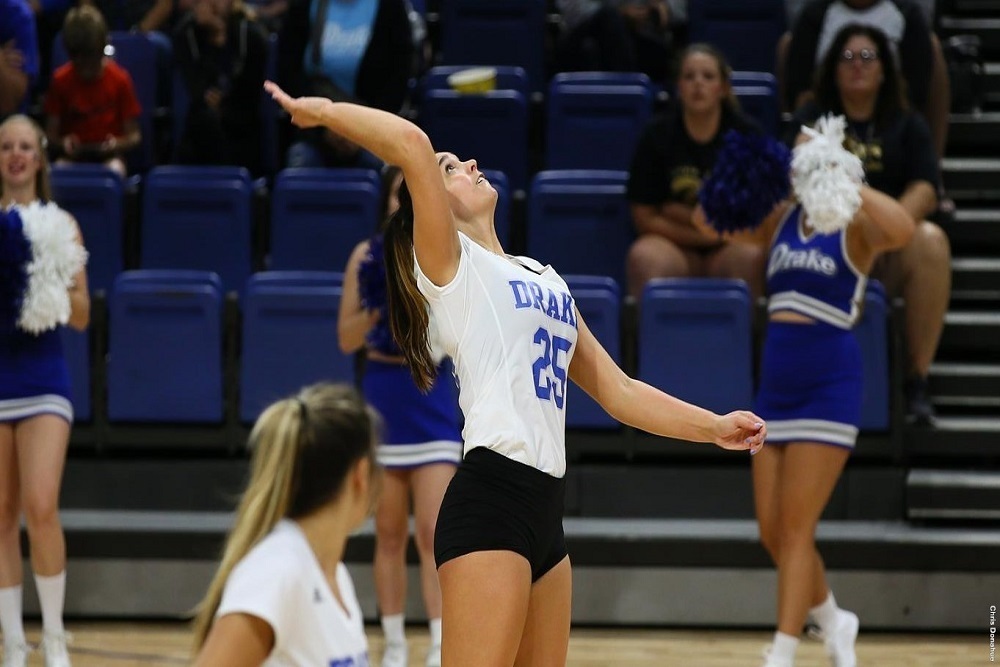 "Overall, I'm excited we got the win tonight and needed to win," said Drake head coach Darrin McBroom. "I don't think we played as well as we could have, but we had a lot of players put up a lot of really good numbers. Cathryn Cheek hit over.500 and we had two new freshmen getting significant action in Riley Dolphin and Danielle Pioske."

The Bulldogs took control of the first set right away by taking an 11-4 lead, forcing Evansville to call a timeout to regroup. Following the stoppage, Drake continued its attack, opening its lead up to 20-10 forcing Evansville to use another timeout attempting to shake the Bulldogs' rhythm. Once again unphased, Drake closed the set winning 25-11.

The second set found both teams exchanging the lead, and neither team could put together a run. Trailing 12-10, Drake called a timeout, but Evansville strung together an 8-3 run to open a 20-15 lead forcing the second Bulldog timeout. The Aces took the set 25-17.

Drake came back firing in the third set, opening an 11-6 lead. Schofield helped spark a run for the Bulldogs, earning three consecutive kills and opening a lead of 17-9 as Drake won the set 25-12.

In the fourth set, both teams traded serves resulting in a Drake lead of 4-3 and an Evansville timeout. The set remained close, being tied at 18, but Drake found momentum and opened up a 5-2 run to force an Evansville timeout at 23-20. Bulldogs finished the set 25-20 behind freshman Danielle Pioske's (Waconia, Minn.) serving.

"It was good to have a little bit of a struggle and this can be a positive if we transfer those principles we learned tonight," McBroom added. "This weekend will be two tough conference matchups and hopefully we can transfer the lessons we learned in our first two MVC matches."

The Bulldogs hit the road for their next MVC series to take on Valparaiso and Loyola, Sept. 28-29.