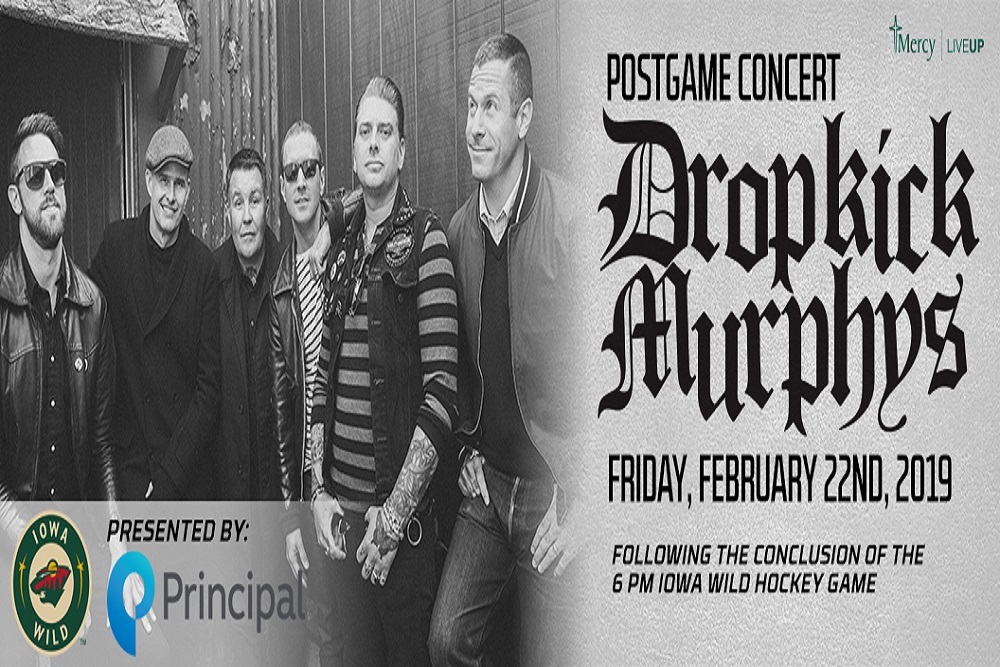 Iowa Wild, in conjunction with Dropkick Murphys, announced the band will perform live after the Wild home game on Friday, Feb. 22 for Concert Night. Concert Night is presented by Principal.

Due to the postgame concert, puck drop will be at 6:00 p.m., instead of the previously scheduled 7:00 p.m. start time.

“We are incredibly excited to bring Dropkick Murphys to Wells Fargo Arena for our fans to enjoy,” said Allie Brown, Senior Director of Marketing and Creative Services with Iowa Wild. “Our fans have expressed their excitement toward the possibility of a band of this magnitude and we are thrilled to be able to provide them with this experience.”

Throughout the band’s 20-plus years, Dropkick Murphys have sold more than six million albums worldwide. The band continues to sell out venues around the world. They've headlined Boston's Fenway Park and have been personally invited to share the stage with performers like Foo Fighters, Bruce Springsteen and Mumford & Sons.

The group's single "I'm Shipping Up To Boston" – from 2005's Certified Gold The Warrior's Code – has sold nearly two million copies. With lyrics penned by Woody Guthrie, the song gained mainstream notoriety after being prominently featured in Martin Scorsese's Academy Award-winning film The Departed. It can be commonly heard at sporting events and on television as a theme song for numerous sports teams, even outside of Boston.

Dropkick Murphys’ most recent album, 11 Short Stories of Pain & Glory, was released on Jan. 6, 2017 and debuted at No. 8 on the Billboard charts, the second highest charting in the band’s history.

Fans with tickets to the Wild game on Feb. 22 can remain in their seats for the postgame Dropkick Murphys concert. Fans must have a ticket to the game to attend the concert, which can be purchased at iowawild.com, by calling 515-564-8700, or by visiting HyVeeTix.com and the Wells Fargo Arena box office.