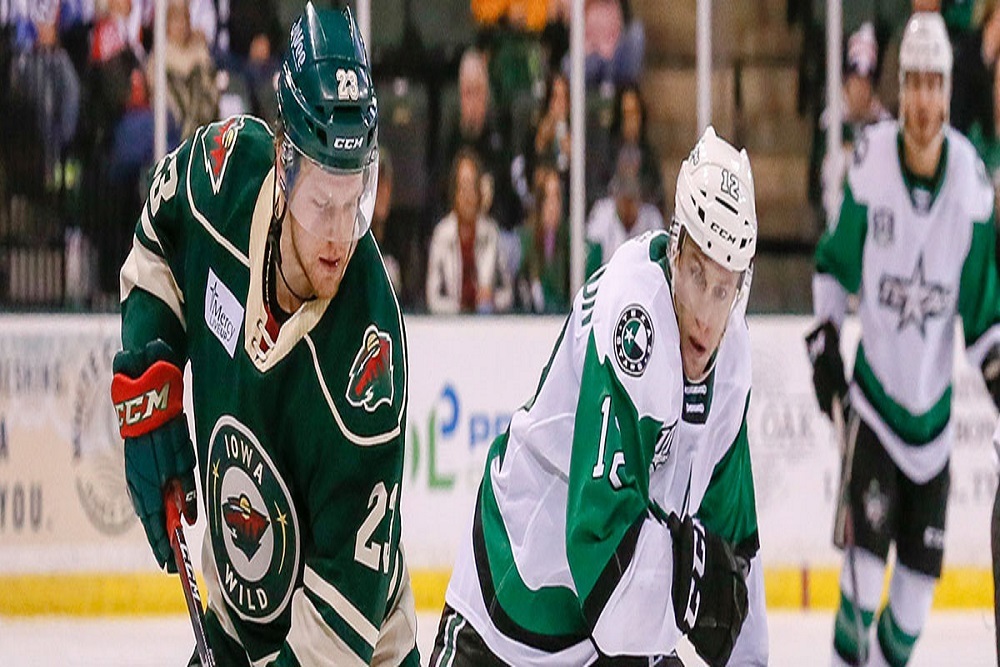 Saturday’s game featured another scoreless first period as neither team found the back of the net. Texas outshot Iowa 11-9 in the period.

For the first time this season, the Wild allowed the first goal of the game. Stars forward Joel L’Esperance scored his third goal in as many games when he deflected a shot from defenseman Joel Hanley over Kahkonen’s glove. Forward Travis Morin registered the secondary assist on the score at 2:20 in the second period.

Forward Colton Beck evened things up at 1-1 with a breakaway goal at 11:20 in the middle frame. Beck caught a pass from forward Gerry Mayhew and maneuvered around a Stars defender with a burst of speed. Fighting off the Texas blueliner, Beck snapped a shot past goaltender Colton Point (19 saves) for his third of the season. Defenseman Brennan Menell, appearing in his first game of the 2018-19 campaign, earned the secondary assist.

Texas took a 2-1 lead at 9:22 in the third period when Erik Condra scored his first goal in a Stars sweater. Forward Colton Hargrove threw a puck on net from the right corner and the puck bounced around in the crease before trickling out to Condra on the back post. Condra buried the puck into the open net for the even-strength tally.

Forward Denis Gurianov added the insurance goal for the Stars at 15:00 in the final frame, notching his fifth tally in as many games in the process. Gurianov wristed a shot over the shoulder of Kahkonen, with forward Roope Hintz and Hanley earning assists on the power-play score.

Texas held on to win Saturday’s tilt 3-1 while outshooting Iowa 28-20.

Iowa returns to Des Moines for a two-game series against AHL newcomer Colorado Eagles. Puck drop on Friday is at 7:00 p.m.