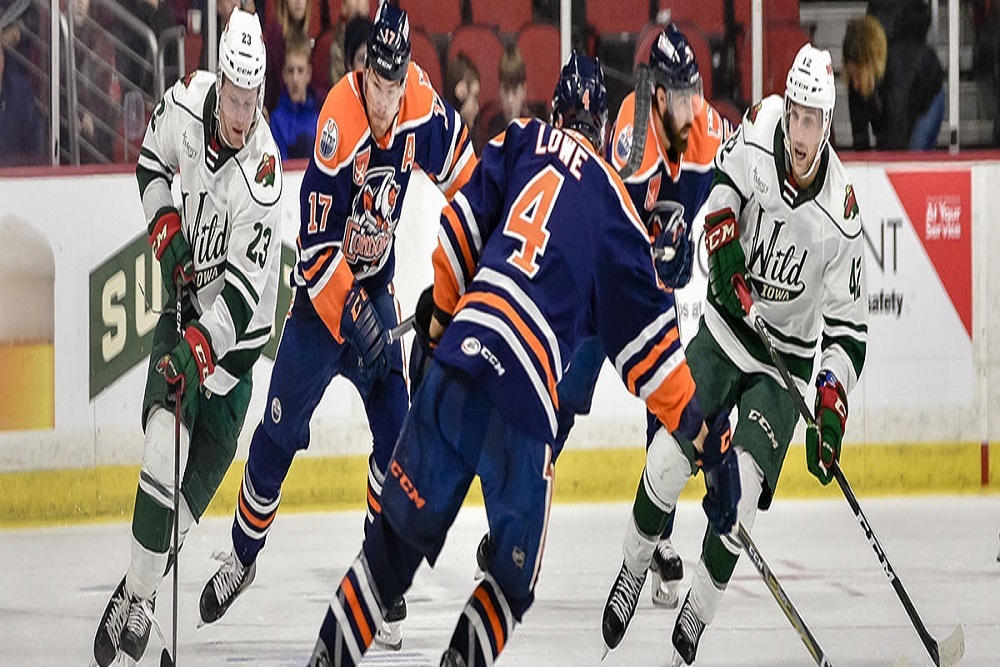 Forward Mitch McLain opened the scoring for Iowa, notching his second goal of the season five minutes into the first period. Forward Dmitry Sokolov found McLain alone in the slot and fed him the puck. Using some quick hands, McLain beat goaltender Al Montoya (24 saves) to the weak side and buried the puck to give Iowa the 1-0 lead. Defenseman Carson Soucy registered his second assist of the season on the play.

Just 46 seconds later, Bakersfield responded on a goal from forward Tyler Benson. Forward Patrick Russell took an initial shot on goaltender Andrew Hammond (36 saves) and the rebound went out to the right side of the net. There, Benson lifted the puck over Hammond’s left pad for the score.

For the second time in as many games, winger Sam Anas found the back of the net as he gave the Wild a 2-1 lead at 11:26 in the first period. On the man advantage, Anas received a pass from defenseman Eric Martinsson above the circles and worked his way toward the net. He then lasered a shot over Montoya’s glove and into the top-right corner for the power-play tally. Center Cal O’Reilly also recorded a helper on the play, giving him points in his last three games and six of his last seven.

Once again, Bakersfield immediately responded, tying the game at 2-2 40 seconds following Anas’ tally. Condors leading scorer Cameron Hebig added to his total when he capitalized on a rebound off a shot from Benson for his sixth goal of the season.

At the end of the first period, the two sides were tied at 2-2 while Bakersfield held a 19-7 shot advantage.

Twelve seconds into the second period, Bakersfield took the lead with a wrist shot from defenseman William Lagesson. Forward Cooper Marody entered the offensive zone and hit Lagesson with a drop pass. Lagesson then wristed a shot over Hammond’s glove for a power-play goal to give the visitors a 3-2 lead.

Bakersfield added to its lead when Russell netted his fourth goal of the season to give the Condors a 4-2 lead at 7:36 in the second period. Teammate Joe Gambardella won a board battle behind the net and the puck squirted out to Russell on the left side of Hammond. Russell’s shot beat Hammond for his fourth of the 2018-19 campaign.

Through 40 minutes of play, Bakersfield led 4-2 while outshooting Iowa 31-16.

Forward Mason Shaw got Iowa back on the board with his third goal of the season at 10:55 in the third period. Coming out from behind the net, O’Reilly curled at the faceoff dot and found Shaw all alone on the far post. Shaw received the pass and immediately lofted the puck over Montoya to cut the Condors’ lead to 4-3.

Fifteen seconds later, forward Gerry Mayhew tied the game at 4-4 with his third goal of the season. From behind the net, forward Kyle Rau sent the puck to forward Gerry Fitzgerald, who immediately shuttled the puck to Mayhew in the slot. Mayhew’s initial attempt was blocked, but he followed it up with a snapshot that beat Montoya on his blocker side. Shaw and Mayhew’s goals 15 seconds apart marked the fastest consecutive goals in Iowa Wild history.

With Mayhew’s tally, the two teams headed to overtime.

In the extra frame, Bakersfield earned the extra point when Marody wrapped around the net and snuck the puck over the goal line at 1:30 in overtime. Marody finished the game with his second consecutive three-point outing, giving the Condors the 5-4 victory while outshooting the Wild 41-28.

By earning a point in the contest, Iowa moved into a tie for second place in the Central Division with the Chicago Wolves.