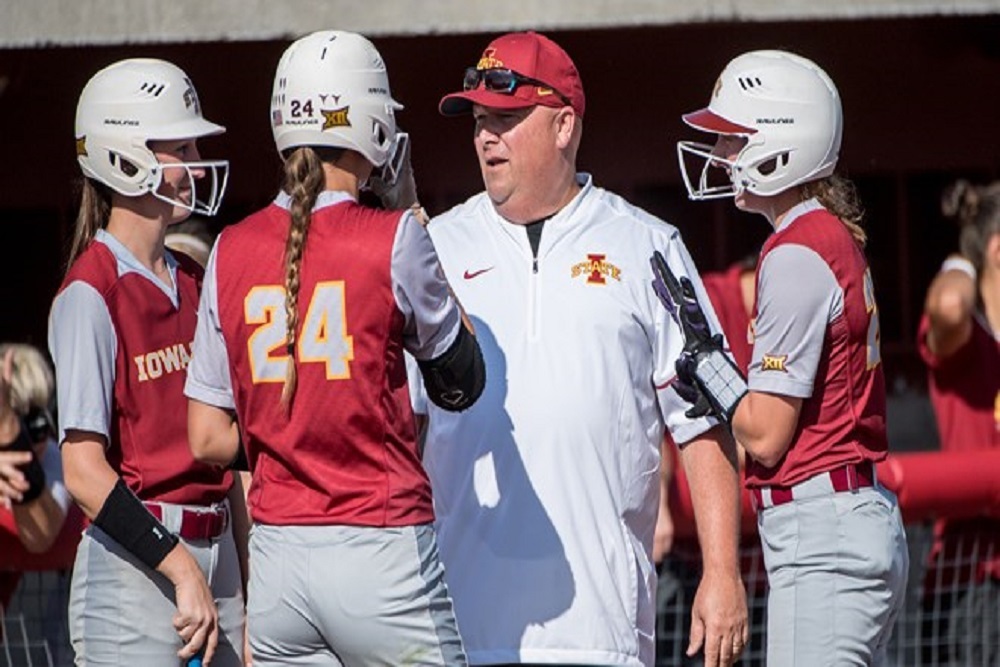 The Iowa State softball program and head coach Jamie Pinkerton announced Wednesday that seven prep standouts have signed their letters of intent to attend Iowa State. Jessica Balich, Karlie Charles, Janessa Jasso, Makaylin Powers, Alesia Ranches, Carli Spelhaug and Morgan Wright are the new Cyclones and will be members of the 2019 class, set to arrive on campus for the 2019-20 season.

"This class brings in what we need and helps replace what we lose to graduation," Pinkerton said. "The versatility of this class will help us plug in what we need. I'm really pleased with the class. They're all really good students and I think we've done a good job of bringing in high-character kids. We're really excited to have them in the program."

Here's a look at Iowa State softball's new additions, including thoughts from Pinkerton on each signee:

Balich comes to Iowa State out of Palos Park, Illinois, where she has enjoyed a phenomenal prep career at Marist High School. As a junior in 2018, Balich hit.441 with 41 RBIs and seven home runs en route to ICA All-State and Southtown All-Area honors. Balich, who plays club softball for the Beverly Bandits, comes from a softball family, as her sister Amy Balich plays infield at Ohio State.

Coach Pinkerton on Jessica Balich: "We picked her up out of one of the top travel ball organizations in the country, the Beverly Bandits. She's going to help us with her tremendous versatility. She's a kid that is going to be a good college hitter. She's going to provide depth right away because she can play multiple positions."

Charles is an excellent pitching prospect that will come to Iowa State battle-tested after playing club ball with the Texas Glory. Currently ranked No. 137 in FloSoftball's Class of 2019, Charles was a 2018 First Team All-District selection. In 2017 she led The Colony to a UIL 5A High School state title and was named to the All-Tournament First Team.

Coach Pinkerton on Karlie Charles: "She comes to us from the Texas Glory organization. She comes from a highly-competitive background in the travel ball ranks. She's a pitcher that will come in and help a young staff next year and can really pound the zone. A very competitive athlete and when we've watched her, she's played really well. What I like about Karlie is her ability to come in and get out of jams. When you're out recruiting, you don't see that a lot."

Jasso joins the Cyclones as one of two pitchers in the 2019 class. She's had a highly-successful prep career at Dos Palos High School, where she racked up a 25-3 record as a junior in 2018. The righty hurler logged a.70 ERA and 299 total strikeouts. She was named All-State small school first team pitcher and MVP of her league.

Coach Pinkerton on Janessa Jasso: "Janessa Jasso is a kid that hits her spots really well and changes speeds. She comes out of the Bat Busters organization and has had a great high school career. She and Charles will complement each other really well in what they do for the pitching staff. She'll help us with the loss of Emma Hylen and Savannah Sanders to graduation."

Powers comes to Iowa State as one of the top prep players in the state of Iowa. She earned All-State honors and was named the Region Player of the Year at Burlington High School. Powers hit.495 with 40 RBIs and seven home runs in 2018 and is a member of the National Honor Society.

Coach Pinkerton on Makaylin Powers: "Powers is one of our two Iowa signees. She brings a lot to the table for us as a lefty with power. She brings good speed and a good arm and she hits with power. She plays for the Iowa Premier, which is a very good travel program here in Iowa. She'll come in and hopefully be able to contribute right away."

Ranches, who will be the first Hawaiian to play softball at Iowa State in program history, joins the Cyclones from Ewa Beach, Hawai'i. She helped her team to an OIA championship, and was named First Team All-OIA and First Team All-State by Scoring Live as a junior in 2018 while batting.421. Ranches is known as a high-level defensive prospect with the ability to play both infield and outfield.

Coach Pinkerton on Alesia Ranches: "Ranches is a middle infielder and outfielder. She's played both for her high school. In short, she's just a very good defensive player. She has good speed and is a kid that will be able to help us with stealing bases and putting a lot of pressure on defenses. A really, really good, sound defensive player."

Spelhaug has helped lead her Pleasant Valley squad to back-to-back state titles, and has twice been named the captain of the All-Tournament Team at state. She was also named MAC Conference Player of the Year in 2018, as well as the Metro Player of the Year. She hit.479 with 44 RBIs and 10 home runs as a junior.

Coach Pinkerton on Carli Spelhaug: "Carli Spelhaug was coveted by a lot of schools. She chose us and I think her personality is a great fit with the program. She's a middle infielder who runs extremely well. She'll add to putting pressure on defenses, along with Ranches. A really good athlete who hits with power. She was on a state championship team. I'm really happy that we got two good Iowa players in this class."

There's a lot to like about Wright as a prospect out of Obra D. Tompkins High School. Primarily a catcher, she also has the ability to move out to the corner infield spots. Wright hit.395 with 18 RBIs as a junior in 2018, and is known to hit for power. She was First Team All-District in 2018 while leading her team to a Bi-District Championship.

Coach Pinkerton on Morgan Wright: "Morgan Wright out of Texas is a good addition for us. She can play catcher and corner infield and this kid just flat-out hits with power. She also runs well for a catcher. She's going to help us with depth behind the plate. What we really like is seeing her hit. She has a lot of power."