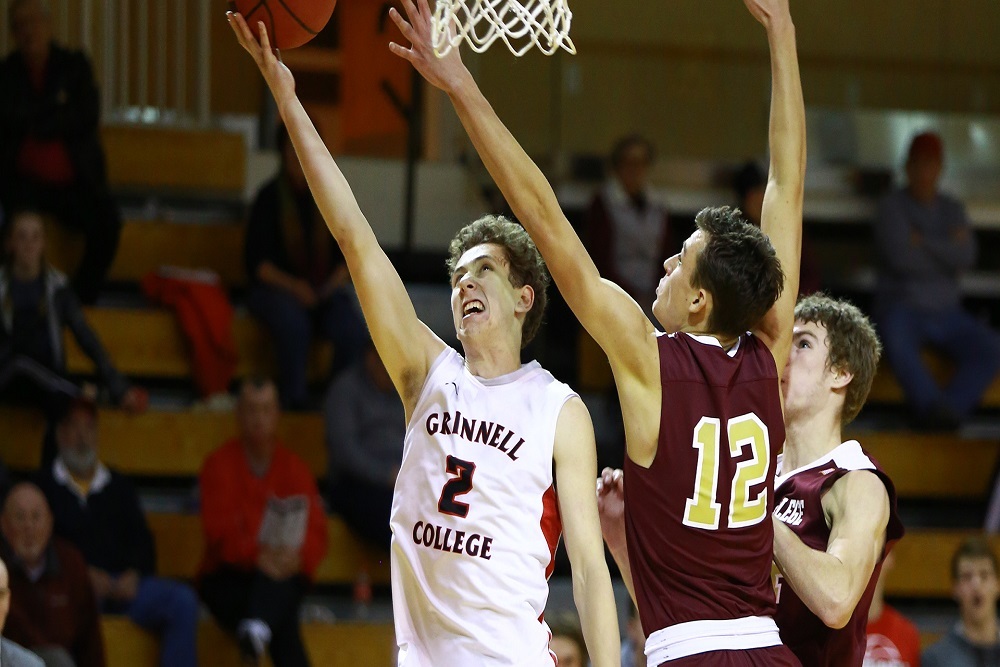 Playing for the first time this season in front of the home crowd, the Grinnell College men's basketball team put on a first-half show on its way to defeating Eureka College 131-108 Tuesday night at Darby Gymnasium.

Hannes Kogelnik '21 tied a school record with a perfect effort at the free throw line, going 10-of-10 while also making seven 3-pointers and tallying a career-high 33 points. Jackson Qualley '22 added a career-best 26 points with the aid of six treys, while Vinny Curta '19 had 19 points and five assists.

Tyler Grumhaus '21 scored 12 points and dished out a career-high five assists, while Brad Geiman '21 pulled down a career-best 10 rebounds.

The Pioneers, 1-1 on the season, shot lights-out 50 percent from 3-point land in the first half with a 20-of-40 success rate while making 48 percent of its shots overall from the field. Grinnell finished at 41 percent from both spots for the game. Eureka, 0-2 on the year, was held to 25 percent shooting from 3-point land.

Grinnell trailed 4-0 before scoring six straight points. Will Bebee '22 began the spurt with a 3-pointer and Kogelnik followed with another trey for a 6-4 edge. Eureka then tied it and later trailed just 11-9 before Grinnell erupted with a 12-1 run. Kogelnik had two 3-pointers to start the run and Curta added another for a 20-9 lead. After Eureka made a free throw, Kogelnik drained another trey for a 23-10 lead.

The Pioneers cruised from there, taking a 77-47 lead into the locker room and never looking back to secure the win.

Grinnell is back in action Thursday when Emmaus visits Darby Gymnasium for a 7 p.m. test.