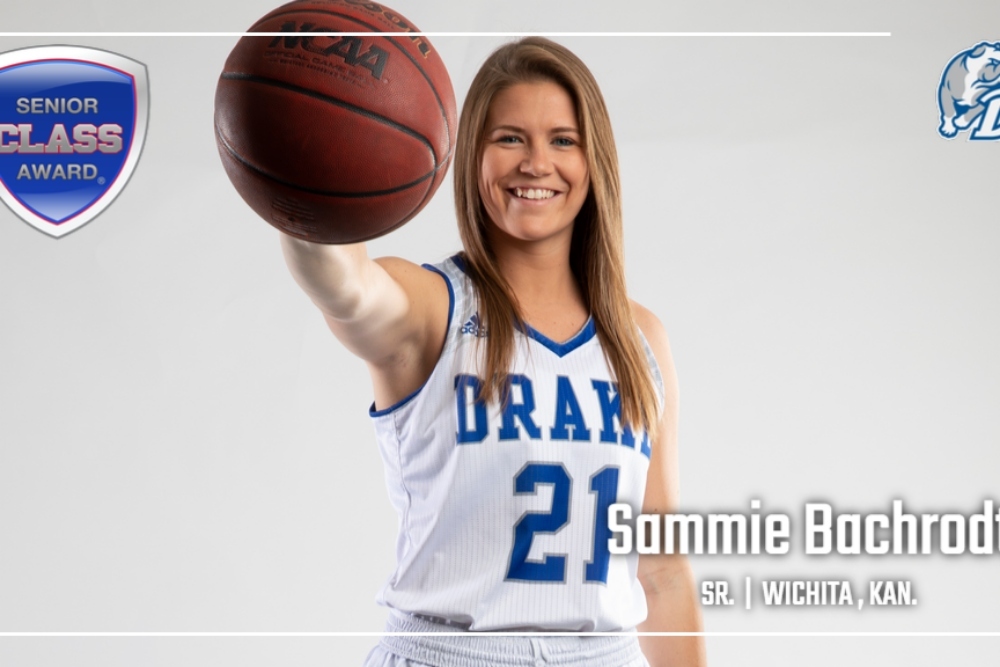 Senior Sammie Bachrodt(Wichita, Kan.) of the Drake University women's basketball team has been selected as a candidate for the 2018-19 Senior CLASS award.

Bachrodt is one of sixty NCAA® men's and women's basketball student-athletes who excel both on-and-off the court and were selected as candidates for the prestigious award. To be eligible for the award, a student-athlete must be classified as an NCAA Division I senior and have notable achievements in four areas of excellence: community, classroom, character and competition.

Bachrodt has started all 108 games in her career and is on the verge of scoring 1,000 points. She is a two-time All-Missouri Valley Conference selection, the 2018 MVC Defensive Player of the Year and two-time MVC All-Defensive team pick. Bachrodt, who has scored 945 points, is No. 8 all-time at Drake in career steals with 208 in addition to making 156 career three-pointers, handed out 291 assists and pulled down 500 career rebounds.

Bachrodt, who earned MVC Scholar-Athlete honors last season, is a finance major with a 3.59 cumulative grade point average and on track to graduate in May, 2019. Bachrodt and her teammates have completed more than 1,000 volunteer hours in each of her first three seasons and are on track to accomplish the community service initiative once again in 2018-19. Habitat for Humanity, Meals from the Heartland and Plymouth Place are just a few of the organizations, Bachrodt has volunteered with during her time at Drake.

An acronym for Celebrating Loyalty and Achievement for Staying in School ®, the Senior CLASS Award focuses on the total student-athlete and encourages students to use their platform in athletics to make a positive impact as leaders in their communities.

Among the 60 candidates, all are in excellent academic standing with 13 having grade-point averages of 3.5 or higher. Twenty-five athletes are returning to the court this season after receiving All-America honors, and 54 of the candidates earned all-conference honors for their performances a year ago. Each of the candidates also volunteers his or her time with charitable organizations and causes while upholding a reputation for positive character on campus and in the community.

The men's and women's candidates will be narrowed to two fields of 10 finalists in February, and those names will be placed on the official ballot. Ballots will be distributed through a nationwide voting system to media, coaches and fans, who will select one male candidate and one female candidate who best exemplifies excellence in the four C's of community, classroom, character and competition.

The Senior CLASS Award winners will be announced during the 2019 NCAA Men's Final Four® and NCAA Women's Final Four® this spring. For more information on each of the candidates, visit seniorCLASSaward.com.