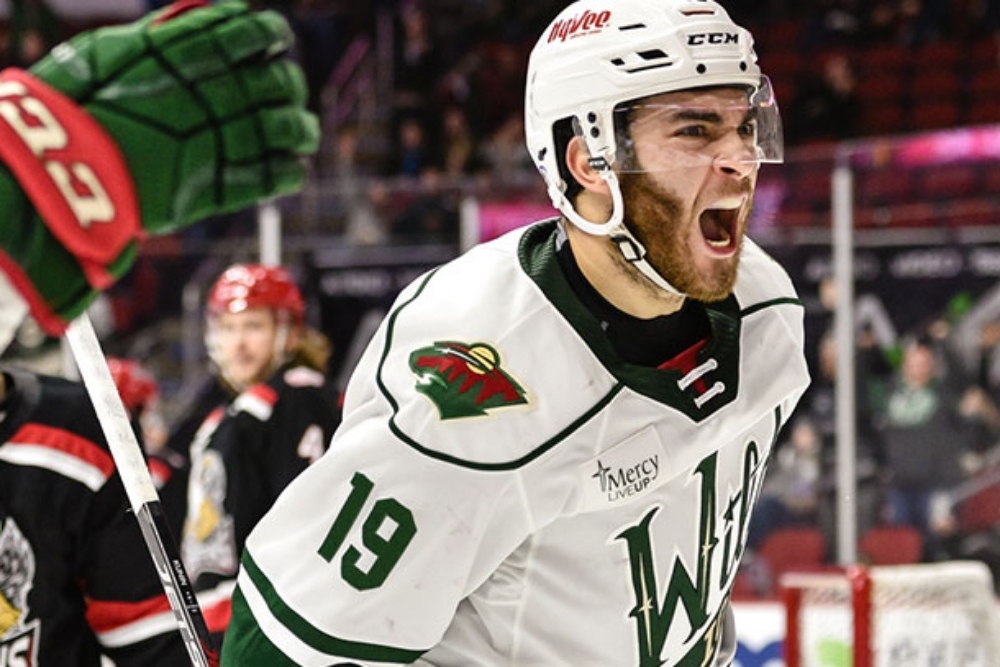 Iowa once again recorded the first goal of the game as forward Justin Kloos scored 3:25 into the opening period. Forward Colton Beck and Kloos had an odd-man rush in the offensive zone, with Beck sliding the puck over to Kloos in the slot. Kloos snapped a shot across the grain, beating Griffins goaltender Patrik Rybar (25 saves) glove side for the goal. Forward Luke Kunin earned the secondary assist on the play.

Less than a minute later, the Wild made it 2-0 thanks to a shot from forward Gerry Mayhew. Deep in the offensive zone, Kloos sent a pass to forward Matt Read down low, who quickly hit Mayhew with his own pass in the slot. Mayhew slammed the puck across the goal line for his seventh goal of the season. In 11 games against the Griffins in his career, Mayhew has nine points (7g, 2a).

At 14:30 in the first period, Grand Rapids got on the board as leading goal scorer Chris Terry notched his 16th tally of the season. A broken play in front of goaltender CJ Motte (22 saves), the puck bounced around in the slot before finding Terry in the right face-off circle. Terry roofed the puck before Motte could slide over, cutting Iowa’s lead to 2-1. Defensman Libor Sulak and forward Matt Puempel assisted on the play.

At the end of the first period, Iowa led 2-1 but Grand Rapids was outshooting the Wild 12-5.

Grand Rapids tied the game at 2-2 with a tip-in goal by Puempel. At 16:44 in the second period, defenseman Vili Saarijarvi took a shot from the blueline that Puempel deflected over Motte and into the back of the net for his 11th goal of the season. Terry earned the secondary assist on the play for his second point of the night.

Through 40 minutes of play, the score was tied 2-2 while Grand Rapids held a shot advantage 19-16.

The Wild regained the lead at 4:43 in the third period while on the power play. A Grand Rapids player attempted to clear the puck when defenseman Ryan Murphy batted the puck out of midair on his backhand. The puck went directly to forward Dmitry Sokolov, who stepped into the high slot and rifled a puck into the back of the net to give the Wild a 3-2 lead. Forward Fitzgerald earned the secondary assist on the game-winning goal.

Kunin made it a 4-2 game at 7:33 in the final frame for his eighth tally of the season. At the right hashmarks, Beck took a shot that was blocked by a Griffins defender but went right out to Kunin in the slot. He ripped a shot past Rybar for the score.

Sokolov extended Iowa’s lead to 5-2 when he recorded his second goal of the game at 12:00 in the third period. Catching a pass from Kunin, Sokolov wristed a shot glove side on Rybar, beating him clean for the score. Beck recorded his third assist of the game on the power-play goal, the first three-assist effort of his career, while Kunin’s primary assist gave him six points (3g, 3a) in his last four games.

When the final horn sounded, the Wild skated away with a 5-2 victory. Shots favored Iowa 30-24 and the Wild finished the game 2-for-6 on the power play and 3-for-3 on the penalty kill.

The Wild head out for a three-game Texas road trip, starting with a contest against the Texas Stars Wednesday night. Puck drop is scheduled for 7:00 p.m.