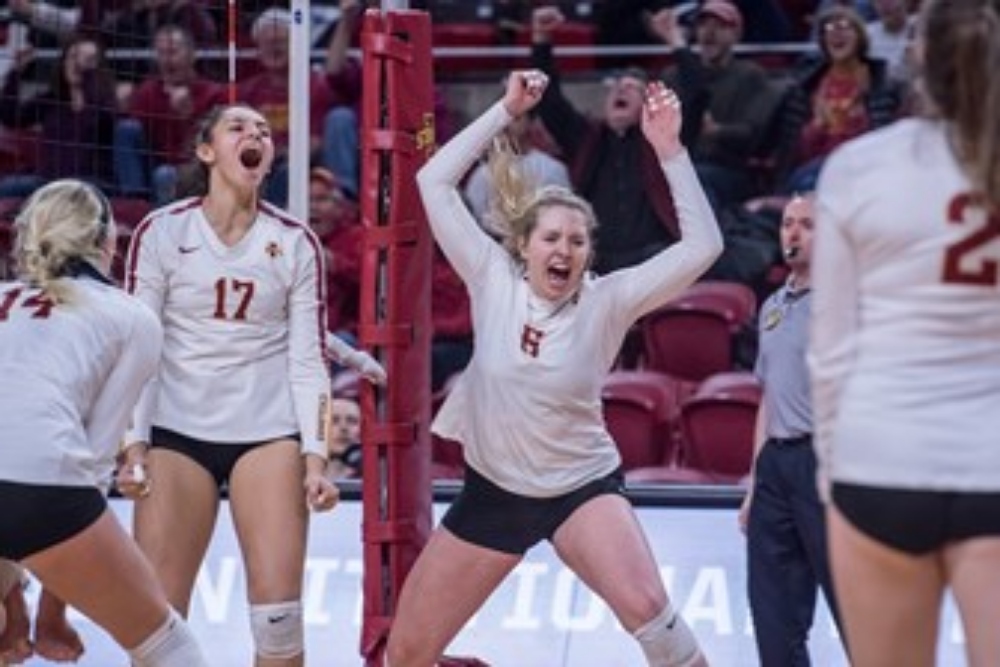 The win means the Cyclones will play the winner of the College of Charleston-Tulane match which will be taking place later tonight in New Orleans. The NIVC Championship match will be played on Tuesday, the site and time of the match will be announced tonight following the other semifinal.

ISU was led by a double-double of 24 kills and 13 digs from Jess Schaben. Izzy Enna had 19 digs, tying her career-high, while Hali Hillegas had 13. Candelaria Herrera had six blocks to lead ISU at the net.

Iowa State found itself in an early rut, as UNLV grabbed the first four points of the set. The Cyclones were back within one at 11-10, but could not get ahead, as UNLV slowly built its way back up to four ahead at 17-13. The Cyclones got back within one at 19-18 via a 3-0 run, but the Rebels got a 3-0 run of their own to eventually reach set point at 24-20. ISU survived all four, with a triple block tying it at 24-24. ISU survive four more before getting its first set point at 29-28, but it was the second set point that did the trick as Candelaria Herrera killed to give ISU the first 31-29.

Hali Hillegas started the set with a 4-0 run to give ISU an early lead at 7-2. The Cyclones were in control for the most part, getting the lead to nine at 16-7 before the Rebels got back into it. UNLV went on a 5-0 run to cut the ISU advantage to 16-12. The Cyclones were able to fight it off, with Izzy Enna serving up a 4-0 run that included an ace to get to set point at 24-16. UNLV held off three set points, but ISU got it when UNLV's Lauryn Burt's set was not met by her middle blocker at 25-19 Cyclones.

Iowa State got off to a solid start, getting up 3-0 via pair of Hannah Bailey aces. However, the tide turned when the nation's leading server, Mariena Hayden, went behind the line and fired off a 6-0 run which included three aces to put the Rebels ahead 11-8. UNLV added to that with another 6-0 run on the serve of Elena Ivanova and a 5-0 run from Antonette Rolda to get ahead 22-10. UNLV picked up the set win when Josie Herbst's shot went long at 25-13.

Hayden's serve caused ISU problems again, as she notched two aces at the start of the set to get UNLV ahead and then another one at the mid-way point to get the Rebels ahead 12-9. 12-straight side-outs between the teams meant Hayden made her way back to the line a third time to get her fourth ace of the set to put the Rebels ahead 19-15. The Cyclones began to rally, bringing UNLV's lead down to two at 19-17 and one at 23-22. Holthaus killed to tie the set at 23-23, and ISU then had to hold off a set point. A triple block of Hayden got ISU match point at 25-24, which was converted when Hayden hit into the net the next point at 26-24 Cylones.

Player of the Match

Jess Schaben. Iowa State's senior leader stepped up again in the big moments. The first set of the match saw her record eight kills alone. She finished the afternoon with her 19th double-double of the season with 24 kills and 13 digs.