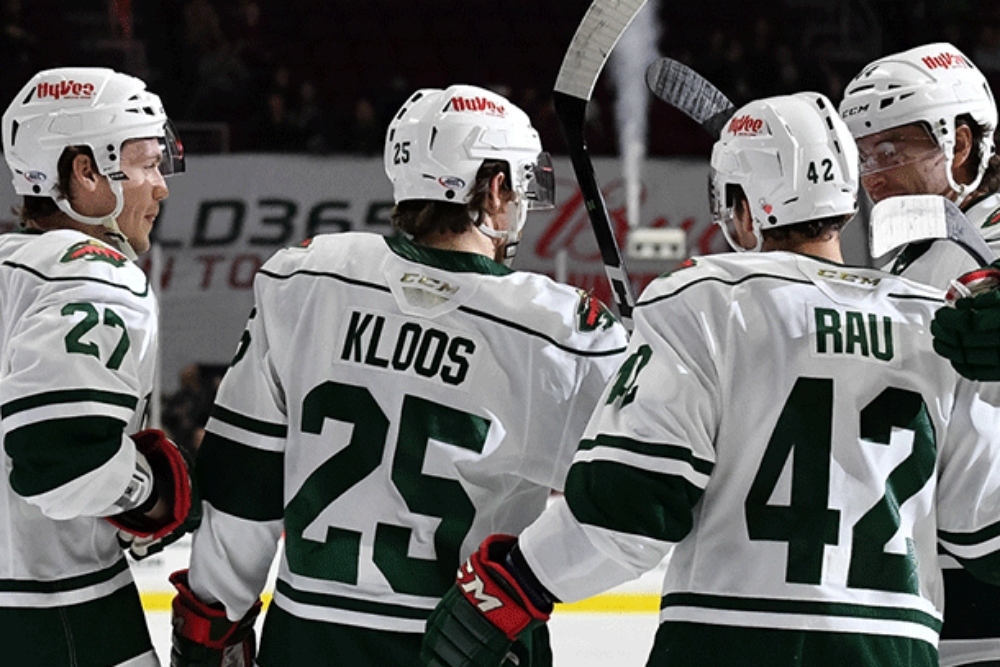 Kloos opened his scoring barrage by setting up forward Dmitry Sokolov on his ninth goal of the season at 3:33 in the first period. Kloos hit Sokolov with a pass, who then lasered the puck into the back of the net from the right faceoff dot.

Kloos then recorded his first goal of the game at 9:38 in the first period for his first shorthanded tally of the season and the Wild’s fourth goal while down a man. Kloos caused a turnover at the defensive blueline and raced in on Jon Gillies (37 saves) alone. He deked and then lifted the puck into the net, giving the Wild a 2-0 lead.

Stockton forward Curtis Lazar potted two consecutive goals, coming at 11:29 and 17:30 in the first period respectively, to tie the game at 2-2.

At the end of the first period, the score was tied 2-2 with Iowa having a 15-13 shot advantage.

The Heat took its first lead of the game at 8:49 as forward Mike McMurtry beat Iowa goaltender Kaapo Kahkonen (31 saves) for his first goal of the season and to give Stockton a 3-2 lead. However, Kloos scored his second of the game just 19 seconds later, receiving a pass from forward Mason Shaw and burying it into an open net for the tally.

Stockton once again pulled ahead, giving the visitors a 4-3 lead at 18:19 in the middle period when forward Matthew Phillips capitalized on his own rebound in front of Kahkonen for his sixth goal of the year.

Wild forward Kyle Rau registered his eighth goal of the season at 19:09 in the second period after Kloos sprung him for a breakaway. Alone on Gillies, Rau snapped a shot blocker side to draw the game even at 4-4.

The third period saw the two teams combine for six goals, with each side scoring three apiece. It started with Iowa forward Gerry Mayhew deflecting a rebound into the net off a shot from Rau just 55 seconds into the period. Kloos earned the secondary assist on the play, setting the new franchise record for points in a single game.

Iowa took a two-goal lead when forward Gerry Fitzgerald floated a puck over Gilles at 2:32 in the third period for his team-leading 11th goal of the year. It was the second two-goal lead for Iowa and the largest lead of the game for either side.

Stockton then rattled off three goals in a 1:41 span to flip the game from a 6-4 deficit to a 7-6 lead for the Heat. Former Wild player Tyler Graovac scored his first goal in Wells Fargo Arena since departing the organization to make it a 6-5 game and a minute later, forward Kerby Rychel scored his team-leading 14th of the year to knot it up at 6-6.

At 5:57 in the third period, forward Buddy Robinson rifled a puck from the left circle over Kahkonen’s blocker to give the visitors a 7-6 lead. It would be the Heat’s last lead of the game.

Once again, Kloos responded exactly 19 seconds following a Stockton goal, this time tying the game at 7-7. Defenseman Brennan Menell, already with three assists in the game, rocketed a slap shot from the right point, where Kloos tipped the puck past Gillies for the team’s fifth hat-trick in history. It also extended his franchise record to six points in a single game.

Heading into overtime, the score was tied at 7-7 with Iowa holding a 41-38 shot lead.

In the extra frame, defenseman Louie Belpedio one-timed a pass from Ryan Murphy into the top left corner of the net to clinch the game. Belpedio’s blast was his second goal of the season and helped the Wild tie a franchise record for most goals in a contest.

In whole, the Wild tied or set five franchise records in the game; most individual points (Kloos – 6), most individual assists (Menell – 4), most goals by the Wild (eight), most combined goals by both teams (15) and most power-play goals in a game (Iowa - 4). Along with going 4-for-10 on the power play, Iowa went 5-for-6 on the penalty kill and finished the game ahead in shots 45-38.