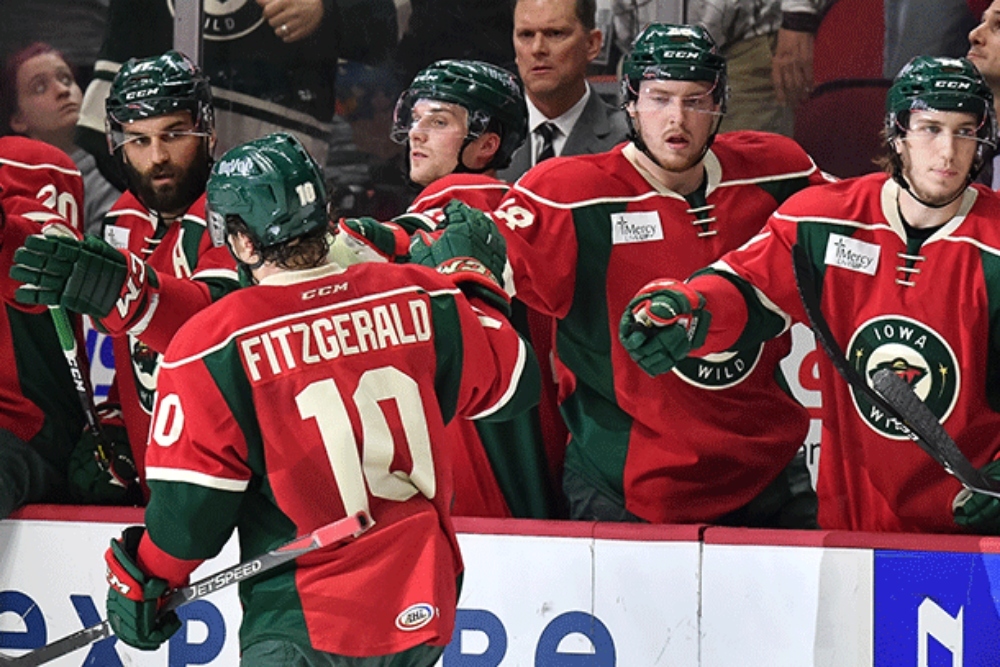 Iowa Wild (16-8-4-3; 39 pts.) blanked the Rockford IceHogs by a score of 4-0 Wednesday evening. Goaltender Kaapo Kahkonen (37 saves) earned his fourth shutout of the season while the Wild vaulted into second place in the division.

For the second time in as many games, neither team scored in the first period, while Rockford outshot the Wild 15-3 during the first 20 minutes.

Defenseman Matt Bartkowski registered his second goal of the season, putting Iowa up 1-0 at 3:13 in the second period. While on an odd-man rush, forward Gerry Mayhew drew the defenseman over before sliding the puck to Bartkowski at the left circle. Bartkowski then ripped a wrist shot high blocker side on goaltender Kevin Lankinen (16 saves) for the tally. Forward Justin Kloos recorded the secondary assist on the play, his eighth point (3g, 5a) in his last three games.

At 14:41 in the second period, forward Gerry Fitzgerald potted his team-leading 12th goal of the season to give the Wild a 2-0 lead. Forward Matt Read kept the puck in at the left point before sending a pass to forward Mason Shaw. Shaw cut through the slot, toe-dragging a Rockford defender before being tripped. Falling to the ice, Shaw sent a quick pass to Fitzgerald on the right post, who roofed the puck on Lankinen glove side.

Iowa extended its lead to 3-0 at 1:25 in the third period. Forward Mitch McLain sent a pass from below the goal line to the right point, where defenseman Brennan Menell unleashed a slap shot on net. In front of Lankinen, forward Will Bitten tipped the puck past the goaltender for his first professional goal.

Read capped off the Wild victory with an empty-net goal at 17:04 in the third period for his second multi-point contest in his last five games. When the final horn sounded, the Wild skated away with a 4-0 win while Rockford outshot the home team 39-20. The Wild finished the game 0-for-3 on the power play and 4-for-4 on the penalty kill.

In three games this season against the IceHogs, Kahkonen has posted a 3-0-0 record with a 0.32 goals against average and a .989 save percentage. Two of Kahkonen’s four shutouts this season have come against Rockford.