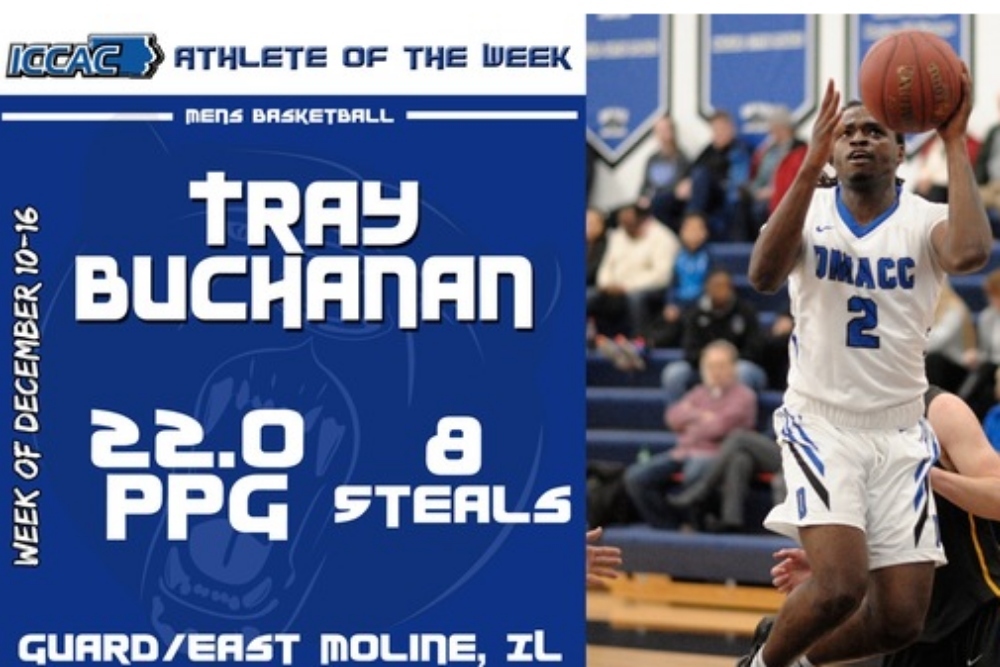 Buchanan, a sophomore from East Moline, Ill., is the second DMACC men's basketball player to be honored by the ICCAC this season. Sophomore DeShawn Davidson of Waukegan, Ill., has been honored twice, the week of Nov. 5 to 11 and the week of Nov. 12 to 18.

Buchanan helped the Bears to wins over Southeastern Community College (SECC) and Central (Neb.) Community College (CENE) during the week. He scored a season-high 35 points in an 87-75 win over SECC, draining nine of 12 field goal attempts, including 6-of-8 from three-point range. He also made 11 of 12 free throw attempts, grabbed eight rebounds and led the Bears in steals with six.

Buchanan had nine points, six rebounds, five assists and two steals in a 94-70 win over CENE.

Buchanan is second in the ICCAC in scoring, averaging 20.6 points a game. He has scored 289 points and is shooting 49 percent from the field, having made 87 of 179 field goal attempts. Buchanan is 35-of-87 from three-point range for 40 percent and has made 80 of 95 free throw attempts for 84 percent. Buchanan's season also includes 56 rebounds, 40 assists and 37 steals.

The DMACC men's basketball team, ranked 19th in the National Junior College Athletic Association (NJCAA) Division II poll, is 11-3 for the season and 1-1 in the ICCAC. The Bears will face seventh-ranked Kirkwood Community College (KCC) Jan. 9 at Cedar Rapids.