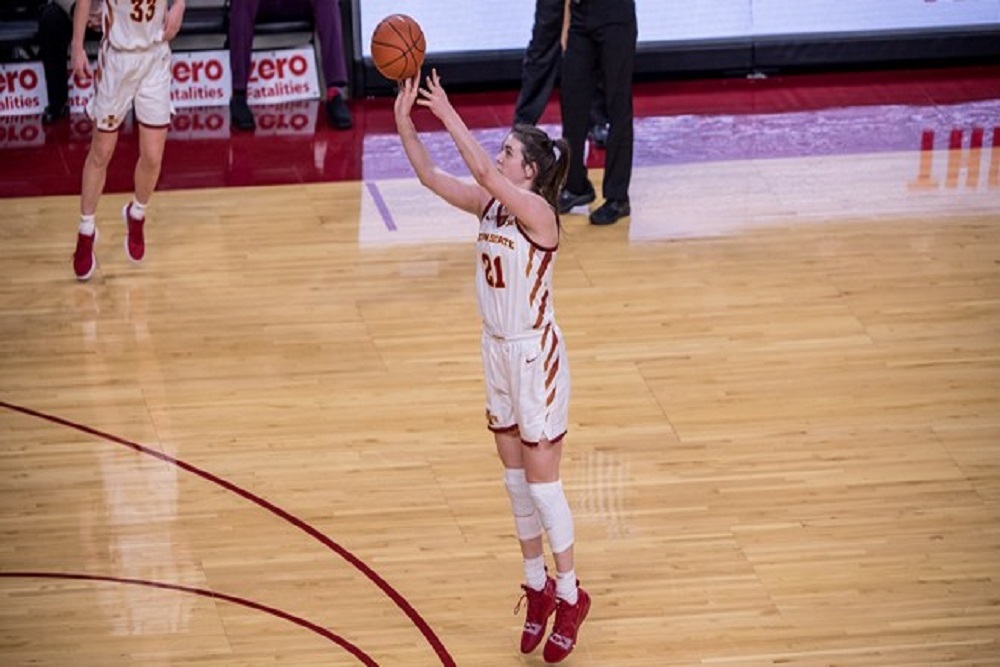 Kristin Scott also had 19 points and 10 rebounds in 26 minutes off the bench. In total, there were five Cyclones in double figures, matching a season-high for the team.

How It Happened
The Cyclones curbed a fast start for the visiting Wildcats with a strong second quarter. Kansas State led by as many as seven after making nine consecutive field goal attempts in the opening minutes of the game, but Bill Fennelly's squad continued a trend of outstanding second quarter performances.

Bridget Carleton's triple in the final seconds of the first quarter closed the gap to 22-19 after one quarter of play, and the Cyclones would turn the momentum into an 11-0 run. Another 8-0 spurt helped ISU take control later in the period. Freshman Ashley Joens was critical, knocking down all four of her first-half 3-point attempts, including three in the second quarter. Iowa State would extend its lead to 46-34 at halftime.

Iowa State's defensive effort was evident after the intermission. The Cyclones held K-State to just 4-of-12 shooting in the third quarter and forced eight Wildcat turnovers in the period. Carleton scored seven in the quarter to lead all players as Iowa State stretched its lead to 65-44 with 10 minutes to play.

The Cyclones closed out the contest in dominating fashion, putting together a 15-0 fourth-quarter run to a put an exclamation mark the Big 12-opener. Iowa State out-scored K-State 31-14 in the final stanza to win 96-58.

Players of Note
Bridget Carleton poured in a game-high 26 points on 10-of-19 shooting in the Cyclone win. She stuffed that stat sheet was a tremendous all-around game, notching nine rebounds, seven assists, a block and a steal.

Sophomore Kristin Scott was outstanding, with a 19-point, 10-rebound double-double on 6-of-9 shooting off the bench. Scott also collected a pair of blocks and knocked down a career-high three triples on the night.

Up Next
Iowa State heads to Lawrence, Kansas to take on the Jayhawks on Saturday. The game begins at 1 p.m. and will be televised by FSN.