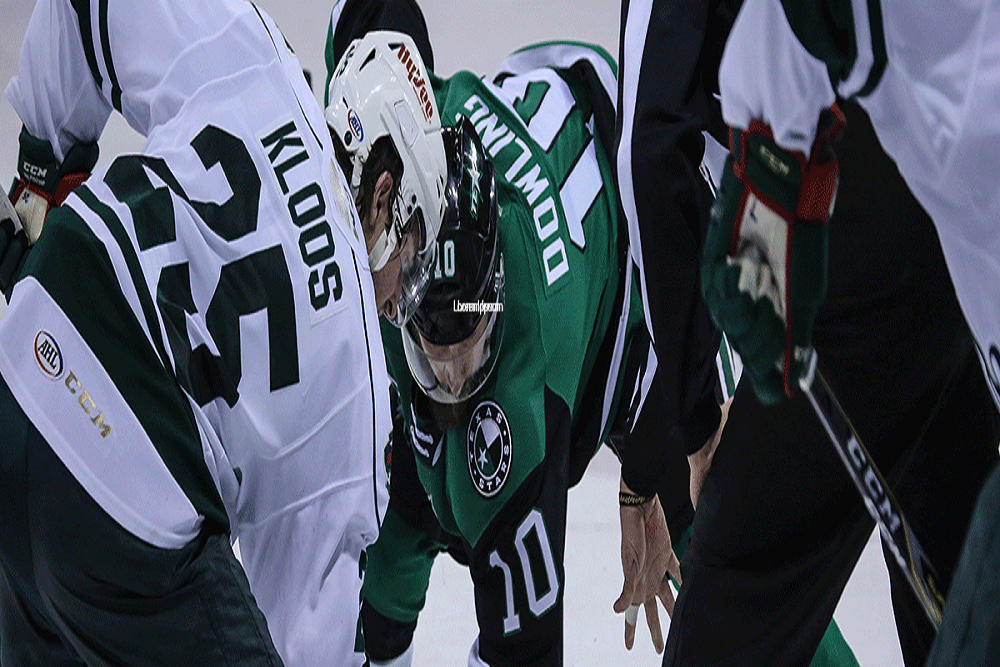 The game opened with three goals in the first 3:02 of gameplay. Texas netted the game’s first score when forward Colton Hargrove split the Wild defense while catching a pass from forward Adam Mascherin. Hargrove then snuck a shot under the arm of goaltender Kaapo Kahkonen (34 saves) for his eighth of the season, coming at 2:14 in the opening period.

Wild forward Sam Anas responded at 2:41 in the first period to even the game at 1-1. After pinching in the zone, defenseman Carson Soucy forced a turnover and tossed a puck into the slot. His pass deflected off forward Mitch McLain before finding its way to Anas. Anas slammed it home past goaltender Philippe Desrosiers (25 saves) for his fifth of the year.

Just 21 seconds later, the Wild took a 2-1 lead as Matt Read notched his 10th goal of the season. Forward Justin Kloos wrapped around the net before sending a pass to Read in the slot. Read’s initial attempt was saved but he followed his shot and poked the rebound across the goal line. Forward Mason Shaw earned the secondary helper on the play.

Texas forward Joel L’Esperance knotted the game at 2-2 when he scored at 4:46 in the second period. Defenseman Dillon Heatherington took a shot from the point that bounced off two Wild defenders before careening into the slot. L’Esperance hacked away at the puck, putting it past Kahkonen for his 21st goal of the season. Defenseman Joel Hanley picked up the secondary assist on the play.

The Stars took a 3-2 lead at 9:54 in the middle frame when forward Michael Mersch snagged his ninth goal of the season. Mersch and L’Esperance entered the Wild zone for a 2-on-1, where L’Esperance hit Mersch with a pass. Mersch then went forehand-backhand and flipped the puck over Kahkonen’s glove for the score. Forward Travis Morin registered the secondary helper on the play.

Texas iced the game when L’Esperance added his third point of the night on an empty-net goal coming at 19:44 in the third period, with forward Justin Dowling recording his 23rd assist on the tally. L’Esperance’s tally was his 22nd of the year, which leads all rookies and is one shy of the AHL lead for all skaters.

The 4-2 loss was Iowa’s fourth consecutive in regulation, the longest such streak for the Wild this season. Texas finished the game ahead in shots 38-27. Iowa went 0-for-3 on the power play and 2-for-2 on the penalty kill.

Iowa returns to Wells Fargo Arena to face off against the San Diego Gulls Monday night. Puck drop is scheduled for 7:00 p.m.