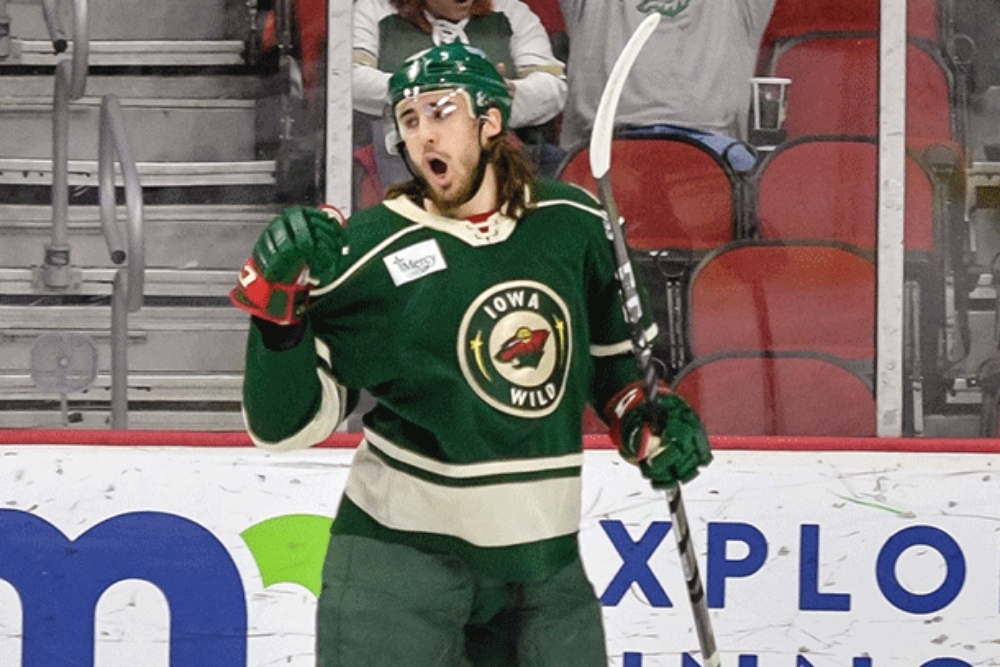 Iowa took a 1-0 lead just 2:11 into the first period when defenseman Hunter Warner notched his first goal of the season. Forward Mike Liambas took a shot on goaltender Anton Forsberg (22 saves) from long range, forcing him to make the stop. Warner picked up the rebound and chipped it top-shelf for the score. Forward Sam Anas extended his point streak to three games with the secondary assist.

The Wild made it a 2-0 game in their favor when forward Kyle Rau notched his 13thgoal of the season. While on a power play, forward Gerry Mayhew caught a pass from Anas and then blasted a one-timer on net. Forsberg made the save but Rau cashed in on the rebound, pushing it over the goal line for the score. Rau’s goal pushed his point streak to four games and Mayhew’s assist gave him a three-game point streak.

At the end of the first period, Iowa led 2-0 and was outshooting the IceHogs 13-3.

Rockford got on the board at 6:31 in the second period to put the game at 2-1. From behind the net, forward Dylan Sikura sent a pass to forward Terry Broadhurst in the slot. Broadhurst beat goaltender Kaapo Kahkonen (18 saves) for his third of the season. The goal snapped Kahkonen’s shutout streak against the IceHogs, which ended at 234:30, a franchise record against a single opponent.

Rau potted his second of the game at 10:23 in the third period, once again on the power play. At the top of the left circle, forward Cal O’Reilly threaded a pass through the slot that deflected off Rau’s skate, past Forsberg and into the net. The assist gave O’Reilly a three-game point streak and gave Rau eight points (6g, 2a) in his last four games, which leads the AHL. Anas recorded his third secondary assist of the day on the play.

Forward Will Bitten iced the game for the Wild with a backhanded shot from Rockford’s blueline at 19:13 in the third period. Both O’Reilly and Mayhew recorded their second helpers of the contest on the play.

The win vaulted Iowa into a tie for first place in the Central Division with the Grand Rapids Griffins. The Wild finished the game outshooting Rockford 26-19 and went 2-for-4 on the power play and 3-for-3 on the penalty kill.

Along with Rau, O’Reilly has eight points (3g, 5a) since Jan. 14, which leads the AHL during that stretch. Mayhew and Anas are right behind them with seven points (2g, 5a each), tied for second in the league.

Iowa hits the road Friday night with a contest against the Milwaukee Admirals. Puck drop is scheduled for 7:00 p.m.