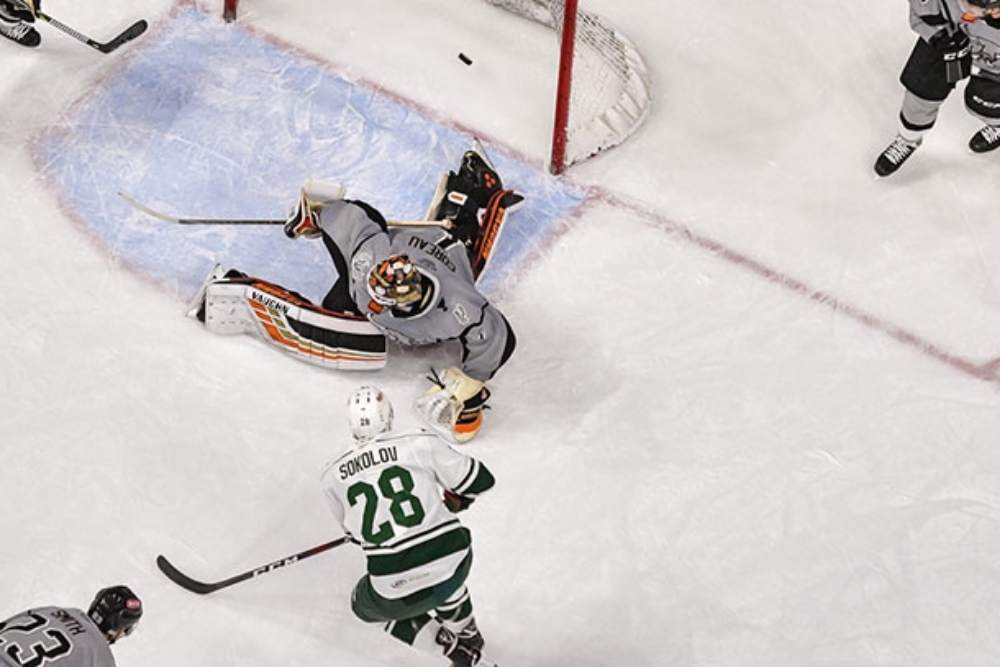 Iowa jumped out to a 1-0 lead when forward Colton Beck capitalized on an odd-man rush for the Wild’s eighth shorthanded tally of the season. After forcing a turnover at the blueline, Beck raced in on a 2-on-1. Electing to shoot, Beck lasered a shot over the left shoulder of San Antonio goaltender Jared Coreau (26 saves) for his 14th of the season. Beck’s unassisted goal came at 10:59 in the first period.

San Antonio evened the game at 1-1 when forward Trevor Smith registered his seventh goal of the season at 18:35 in the opening period. Forward Jordan Kyrou took a shot that was saved by Wild goaltender Kaapo Kahkonen (19 saves) with his right pad, but Smith put home the rebound for the score. Also earning an assist on the play was forward Sammy Blais.

At the end of the first period, Iowa and San Antonio were tied 1-1 with the Rampage leading in shots 9-5.

The two teams then exploded for six combined goals in the second period. San Antonio took a 2-1 then a 3-1 lead after goals by forward Adam Musil and defenseman Niko Mikkola. Musil ripped a shot from the top of the right circle at 3:01 for his unassisted goal and Mikkola recorded his first career AHL goal with a wrister that beat Kahkonen glove side just 19 seconds later. Forwards Jordan Nolan and Austin Poganski earned the assists on Mikkola’s first goal.

Wild forward Matt Read notched a power-play goal at 5:33 in the middle frame to cut San Antonio’s lead to 3-2. Defenseman Michael Kapla was on the goal line and threw a puck on net that deflected off Read’s skates and past Coreau for his 12thtally of the year. Defenseman Louie Belpedio logged the secondary assist.

Blais made it a 4-2 game in favor of the visitors with his seventh of the year at 9:31 in the middle frame. Center Ryan Olsen took a shot from the right faceoff circle that Kahkonen saved, but Blais chipped the rebound over his pads for the score.

Iowa then struck twice in less than a minute to even the game back up at 4-4. Kapla earned his second assist of the game when he took a shot from the point that Read deflected past Coreau for his second tally of the night, both of which came on the man advantage. Just 56 seconds later, defenseman Matt Bartkowski ripped a slap shot from the point and forward Gerry Mayhew got his stick on the shot, resulting in his team-leading 16th goal of the year.

After the scoring barrage in the second, neither team found the back of the net in the third, forcing the game to overtime.

In the extra frame, the Wild went to a power play as Blais sat for a hooking penalty. On the man advantage, a shot from Belpedio hit the end boards but bounced back in front of the net. There, forward Dmitry Sokolov picked up the puck and snapped a shot through Coreau’s legs for his 10th of the season and the game-winner.

Both Read and Belpedio finished the game with three points, with Kapla recording his second straight multi-assist contest. The win also moved Iowa within two points of first place in the Central Division.

Iowa takes on San Antonio once again tomorrow night for the team’s annual Pink in the Rink game. Puck drop is scheduled for 6:00 p.m.