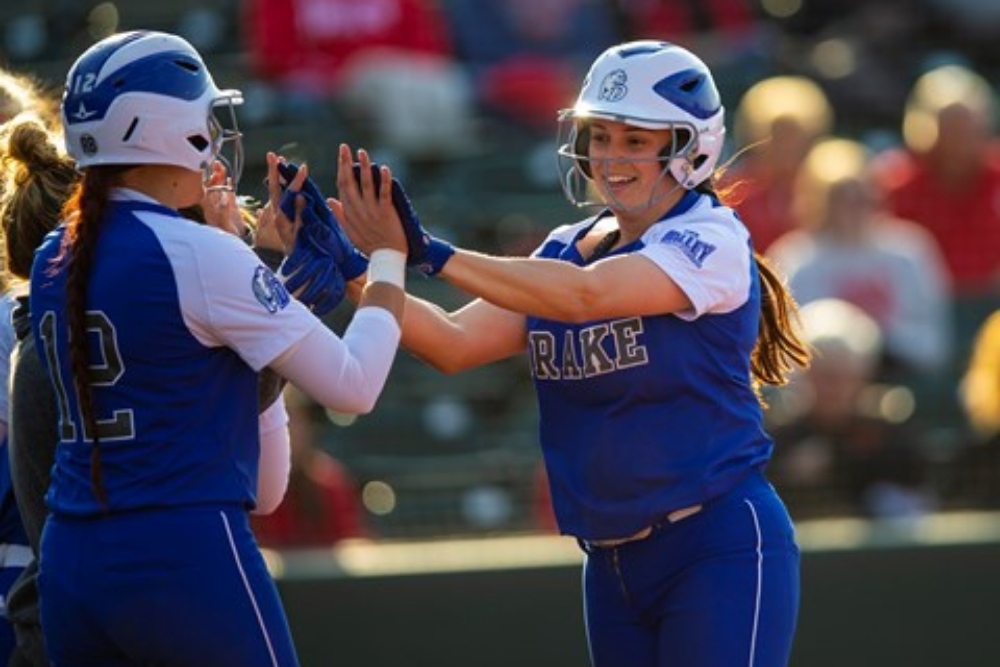 The Drake University softball team swept a doubleheader at Nebraska Tuesday night at Bowlin Stadium. Drake (18-13) defeated Nebraska (10-18) by scores of 7-1 and 14-0 in five innings.

In the first game, Drake loaded the bases in the first inning and Abby Buie(Gardner, Kan.) hit a leadoff double in the second, but was unable to push a run across the plate.

However, in the third inning, the Bulldogs broke through as Taryn Pena's(Columbia, Ill.) fielder's choice to the shortstop scored Macy Johnson(Winterset, Iowa), who led off with a single, for the game's first run. Nicole Newman (Madison, Wis.) followed with an RBI single as Frank scored to give Drake a 2-0 lead. Three batters later, Libby Ryan (Mount Vernon, Iowa) ripped a single to right field that scored Taryn Pena (Columbia, Ill.), but Newman was thrown out at the plate to end the inning with leading Drake leading 3-0.

The Bulldogs' offense busted out for four more runs in the sixth inning. Johnson dropped a bunt down and Ryan came all the way around to score after the throw went past the first baseman. Frank then ripped a single to right field that scored Johnson and Pena followed with a two-run home run, her fourth this season, that cleared the center field wall.

In the circle, Newman dominated with 14 strikeouts and allowed just one run on two hits. She improved to 10-6 with her 28th career 10+ strikeout game. Nebraska's only run came from a solo home run in the fourth inning, prior to that home run Newman hadn't allowed a baserunner.

In the second game, Johnson's bat started the scoring in the third inning. Ryan led off with a perfect bunt for a single and Mandi Roemmich (West Des Moines, Iowa) followed with a double over the left fielder's head and off the wall. Johnson then hit a rocket into right center for a double that plated Roemmich and Ryan.

Drake added four more runs in the fourth inning, all with two outs. Roemmich drove in two with a bouncing single through the right side and Johnson then crushed a ball deep into right field for a bases clearing triple.

The Bulldogs tacked on eight more runs in the fifth inning to end the game early. Four of those runs came from Maddox's second career grand slam.

Drake opens its home schedule Saturday against Indiana State with a scheduled doubleheader at Buel Field. First pitch of the first game is set for 12 p.m. All three home games will be broadcast on ESPN3.