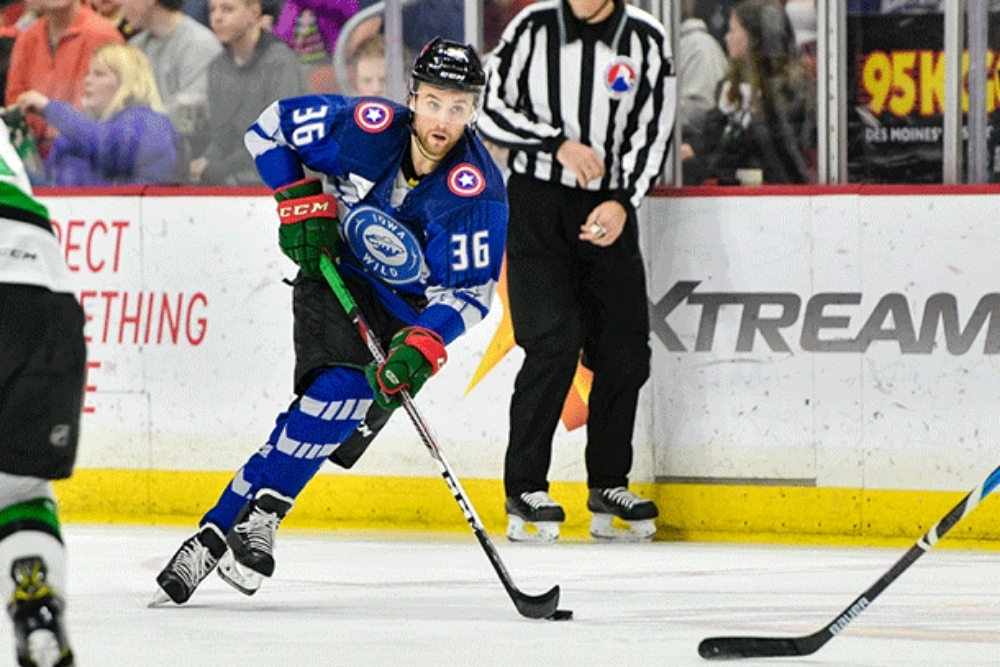 Wild forward Gerry Mayhew gave the Wild a 1-0 lead at 11:31 in the first period as he scored his 23rd goal of the season. With the Wild on the power play and Mayhew in the slot, forward Cal O’Reilly sent him a pass that was easily deflected past the glove of goaltender Philippe Desrosiers (24 saves). Defenseman Brennan Menell also recorded an assist on the play.

Just more than a minute later, forward Kyle Rau doubled Iowa’s lead. Forward Mason Shaw caught a pass from Menell and then fed a pass to Rau barreling toward the net. He fired a shot that bounced off the skates of two Texas defenders and into the net for his 26th of the season, tying forward Sam Anas’ record for most goals in a single season. With his tally, Rau moved his home point streak to 11 games, amassing 20 points (11g, 9a) in that stretch.

Texas started chipping away at Iowa’s lead when forward Adam Mascherin scored his 18th of the season at 2:49 in the middle frame. Iowa goaltender Andrew Hammond (24 saves) was bumped by a Stars attacker and Mascherin buried his shot into the open net for the score.

The Stars then knotted the game at 2-2 at 9:08 in the second period. Forward Colin Markison received a pass from Mascherin in the high slot and took a shot. The puck found the back of the net, squeaking under Hammond’s glove for his eighth of the season.

Texas made it three straight goals to take a 3-2 lead at 17:22 in the second stanza. Markison had the puck behind the net and shipped a pass to forward Rhett Gardner out in front. Gardner then one-timed the puck past Hammond glove side for his first professional goal.

Heading into the third period, Texas led 3-2 while Iowa outshot the visitors 21-19.

Texas extended its lead to 4-2 at 7:57 in the third period when defenseman Niklas Hansson scored a power-play goal. Hansson let a shot rip from the top of the left circle and beat Hammond five-hole for his seventh of the season.

The Stars pushed its lead to 5-2 with another power-play goal, coming at 14:55 in the third period. Forward Michael Mersch gathered a pass forward Travis Morin on the back door and chipped it top-shelf for his 22nd of the season.