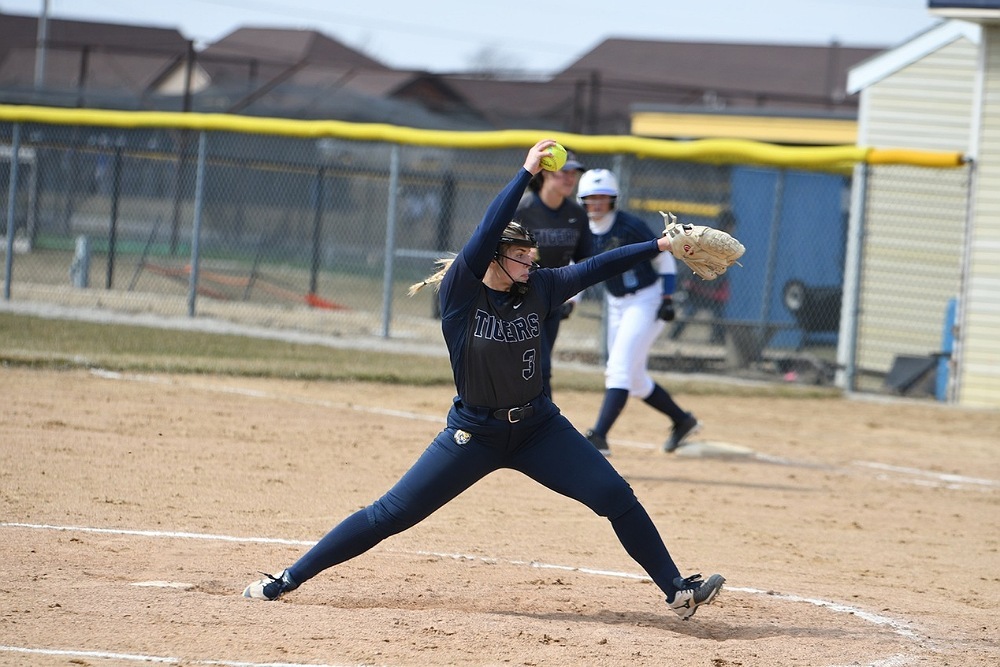 The MCC softball team traveled to Southwestern Community College on Tuesday, April 2 for a pair of games against the Spartans.

Game one saw the Tigers jump out to an early 3-0 lead. After the first two batters, Taylor Hipsley and Aliyah Scott struck out, the Tigers were helped by a pair of SWCC errors. McKaylee Dawson reached first on an error by the second baseman and the next batter, Kylie Swan, reached on an error by the third baseman. Nicolette Dabbs singled up the middle to score Dawson. And then with runners on the corners, DJ Schmidt doubled to right-center to score Swan and Dabbs. Nell Skeath then walked and after a passed ball and a stolen base, AnnaMarie Armstrong came to the plate with runners on second and third with two out. Unfortunately, the sophomore grounded back to the pitcher and left Schmidt and Skeath in scoring position. But after the top of the first the Tigers led 3-0.

Unfortunately for the Tigers, not being able to score runners would be a trend in this game.

It took until the bottom of the second inning for either team to score any more runs. This time, it was the Spartans turn to take advantage of defensive miscues. With two outs and two on, a ball to center field was misplayed. The error scored two runs and extended the inning. Eventually the Spartans scored four runs in the inning and took a 4-3 lead.

While the Tigers went scoreless in innings 3, 4, and 5, the Spartans added to their lead with four more runs to take an 8-3 lead into the sixth.

After a leadoff single and a couple of outs, Swan doubled to left-center and the Tigers moved the game to 8-4.

Leading 8-4, the Spartans tacked on two more runs in the bottom of the sixth to give themselves some breathing room at 10-4. Again, an error in center was costly in allowing the runs to score.

Down by six with just three outs remaining, the Tigers looked to rally as Schmidt started the inning off with a double. An error allowed Schmidt to score, but the Tigers couldn't do any more damage and dropped game one, 10-5.

Game two was never in question for the home team.

After getting through the top of the first scoreless, the Spartans put three runs on the board before the Tigers recorded an out. With the bases now clear, the Tiger defense and pitching settled in and played a clean remainder of the inning.

DJ Schmidt scored for the Tigers in the top of the second inning after the sophomore, first baseman doubled to start the campaign.

But the wheels came off in the bottom of the second. With the 7, 8, 9 hitters due to bat, Cayla Maitlen led off with a triple. She scored on a wild pitch during the next at bat. The 8 and 9 hitters reached on a walk and a hit before three consecutive batters drew walks. An error compounded the pitching issues and when all was said and done, the home team had plated seven runs.

The Spartans never looked back as they cruised to a 20-4 win in five innings.