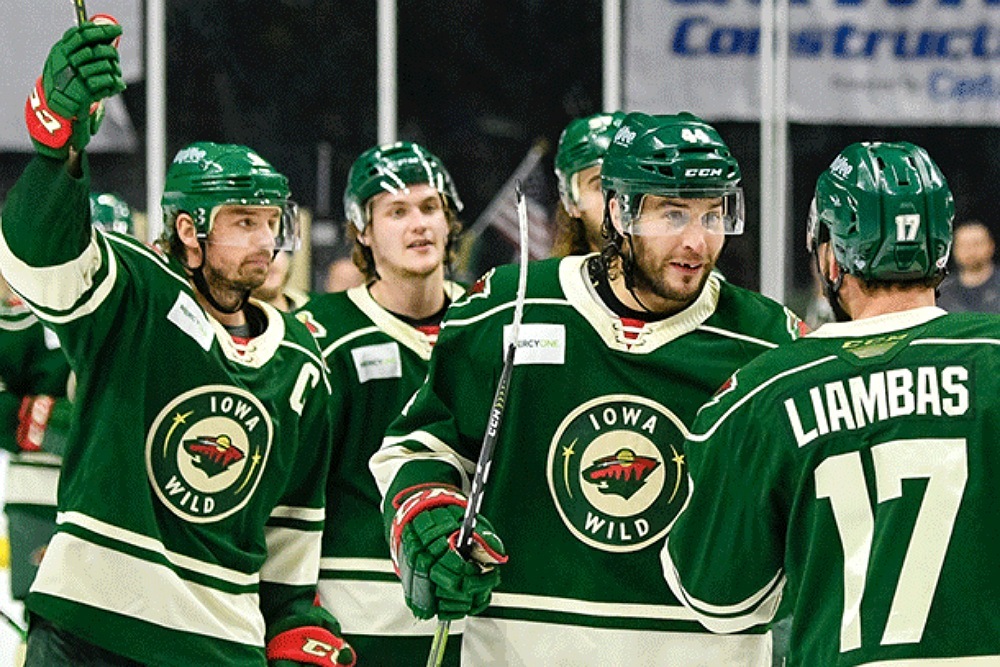 Iowa took a 1-0 lead off the back of forward Cal O’Reilly, as he potted his first Calder Cup Playoff goal since 2017 at 12:19 in the first period. Standing at the far post, O’Reilly tapped in a feed from Gerry Mayhew, beating goaltender Troy Grosenick (22 saves). O’Reilly’s tally was the first Calder Cup Playoff goal in Iowa Wild history and Mayhew and defenseman Brennan Menell’s assists were their first career playoff points.

Iowa pushed its lead to 3-0 when forward Sam Anas scored at 8:30 in the middle frame. Forward Mike Liambas forced a turnover at the Milwaukee blueline, giving Anas a partial breakaway. Anas deked to open up Grosenick’s five-hole and buried his shot for his first Calder Cup Playoff goal and point. Liambas and forward Luke Kunin earned the helpers on the play.

Forward Kyle Rau continued Iowa’s scoring run, extended the team’s lead to 4-0 at 11:24 in the second period. Forward Matt Read caught a pass from defenseman Nate Prosser and cut through the slot toward the right corner. At the bottom of the right circle, he then reversed the puck to Rau in the slot, who rifled a shot into the open net.

Rau netted his second of the game at 10:19 in the third period, moving Iowa’s lead to 5-0. Battling for position in front of McCollum, Rau picked up a rebound off a shot from defenseman Matt Bartkowski and jammed it home for the score. Read picked up his second assist of the game on the play.

Kunin then stretched Iowa’s lead to 6-0 with his first career Calder Cup Playoff goal just more than a minute later. Kunin received a drop pass from forward Ryan Donato and lasered a puck top shelf for the tally. Forward Jordan Greenway also recorded an assist on the play for his first Calder Cup Playoff point.

Iowa made it a 7-0 game as forward Colton Beck, the Wild’s franchise leader in games played, notched his first career Calder Cup Playoff goal while on the power play. After Anas weaved through the Milwaukee defense, he found Beck at the top of the left circle. Beck walked in and lasered a shot high stick side, going bar down for the goal. Liambas earned his second assist of the night on the play for his first career playoff multi-point game.

In total, 14 different Wild players recorded points in the contests, seven of which were the first Calder Cup Playoff points of their respective careers. Sunday’s win also featured seven multi-point efforts and marked the fourth time this season Iowa has scored seven or more goals in a contest. The seven-goal margin of victory matched the season high for the Wild as well.

Iowa finished the game outshooting Milwaukee 42-29 in the 7-0 rout. The Wild went 1-for-9 on the power play and 3-for-3 on the penalty kill.

The Wild and Admirals will take to the ice Tuesday night for Game 2 in the Central Division Semifinals. Puck drop is at 7:00 p.m.