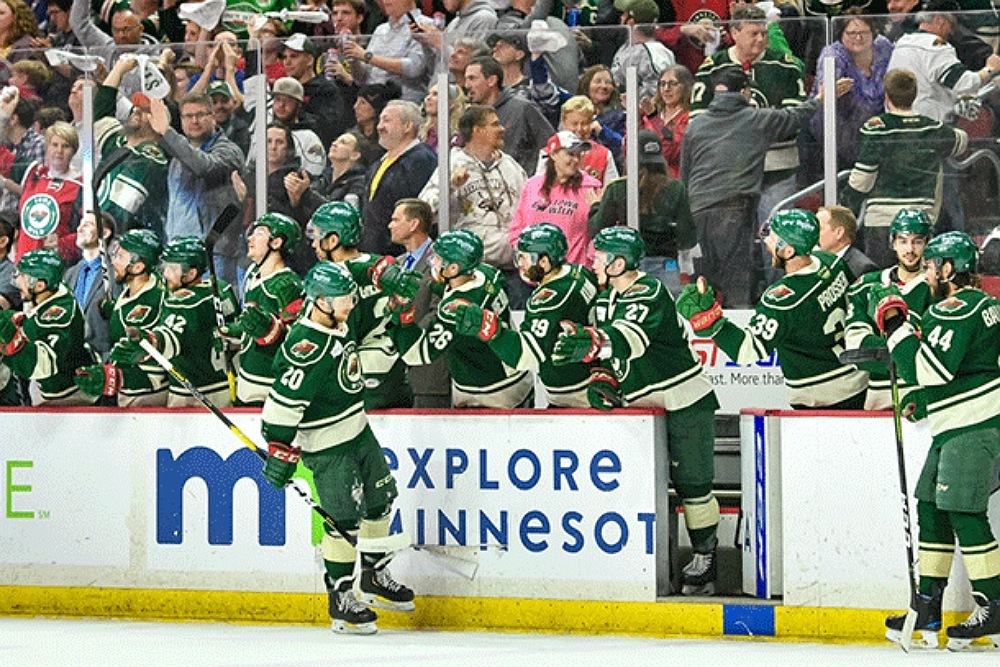 Iowa Wild issued the following announcement on May 8.

Forward Gerry Mayhew netted two goals to bring his total to nine this postseason as he led the Iowa Wild (5-4) to a 2-1 victory against the Chicago Wolves (5-4) Wednesday evening.

Mayhew extended his Calder Cup Playoffs goal lead with his eighth of the postseason at 13:01 in the first period. Mayhew caught a quick pass from forward Cal O’Reilly on the right side of the ice and then drove to the net. He made a move on goaltender Oscar Dansk (20 saves), faking short-side before dragging the puck to the far post and slipping it over the goal line. Defenseman Hunter Warner earned the secondary assist on the play.

Neither team scored in the second and heading into the third, Iowa still led 1-0 but Chicago led in shots 22-13.

At 5:25 in the third period, Mayhew pushed Iowa’s lead to two as he potted his second of the game. A loose puck in front of Dansk created a scramble in front of the net and Mayhew hammered the puck home to give the home side a 2-0 lead with his ninth of the Calder Cup Playoffs. Forward Will Bitten and O’Reilly were credited with the assists on the play.

Chicago finally got on the board at 9:11 in the final frame, cutting Iowa’s lead to 2-1. Defenseman Zac Leslie took a shot from the point that was tipped by forward Curtis McKenzie and squeaked through goaltender Andrew Hammond (33 saves). The goal snapped Hammond’s shutout streak, which stood at 143:04, dating back to Game 2.

Following the Wolves’ goal, the Iowa defense weathered a flurry of Chicago shots but Hammond turned them all away, giving the Wild a 2-1 win and evening the series at 2-2. Hammond’s victory was his sixth consecutive on home ice and his fifth of the postseason.

Iowa finished the game 0-for-1 on the power play and 2-for-2 on the penalty kill. Through the Calder Cup Playoffs, Iowa has killed 33-of-34 opportunities (97.1 percent), the best mark in the league. Chicago finished the game outshooting the Wild 34-22.

Mayhew’s nine goals are the most at this point in the postseason since Teemu Pulkkinen had 11 goals with Grand Rapids during the 2015 Calder Cup Playoffs. Mayhew’s nine tallies are also three more than the next closest players, teammate Luke Kunin and Charlotte’s Aleksi Saarela, who both have six goals.

Iowa and Chicago meet again Friday night at Wells Fargo Arena for Game 5, with both sides looking to take a 3-2 series lead. Puck drop is scheduled for 7:00 p.m.