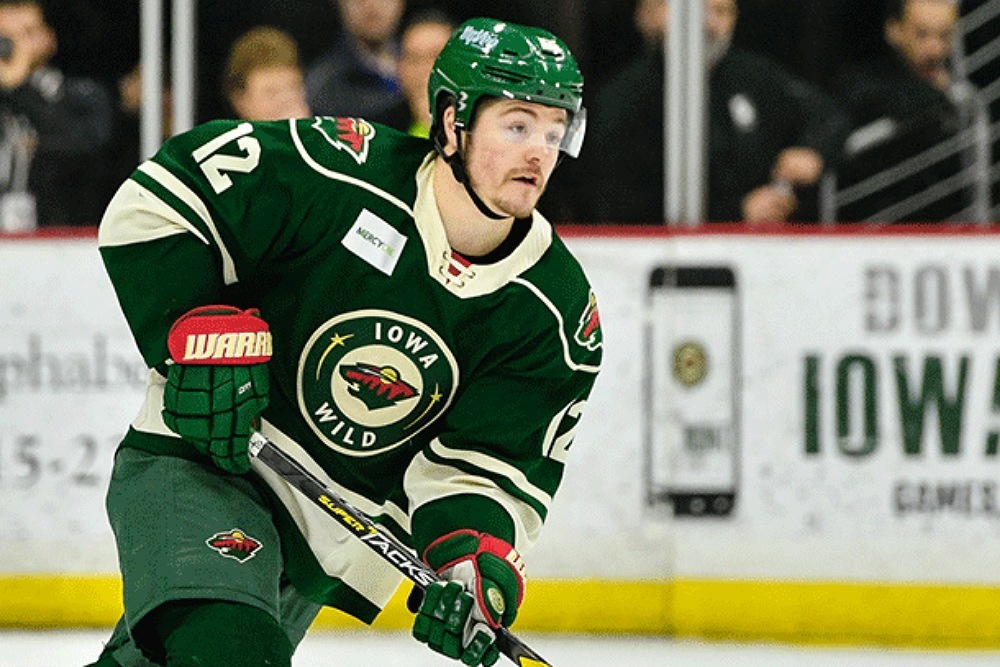 Iowa Wild issued the following announcement on May 10.

Chicago took a 1-0 lead at 3:09 in the first period as forward Matthew Weis recorded his second goal of the postseason. Defenseman Kevin Lough took a shot from the point that nicked Weis’ leg in the slot and past the outstretched pad of goaltender Andrew Hammond (22 saves). Forward Stefan Matteau also recorded an assist on the play.

Iowa tied the game up at 1-1 at 15:02 in the first period as forward Ryan Donato records his first goal of the postseason. Donato intercepted a breakout pass by the Wolves and skated into the right faceoff circle, where he rifled the puck over the glove of goaltender Oscar Dansk (24 saves) for the unassisted tally.

Chicago answered at 18:15 in the opening frame with a shorthanded tally off the stick of Matteau. Matteau tossed the puck on net from his backhand, which snuck through Hammond’s five-hole for his first of the postseason. The goal was also the first shorthanded goal by either side so far this series.

At the conclusion of the first period, Chicago led 2-1 with the Wolves owning a 9-6 shot advantage.

Chicago took a 3-1 lead at 4:24 in the middle frame as the Wolves potted their first power-play goal of the series. Defenseman Zach Whitecloud took a shot from the point that was tipped by forward Cody Glass and saved by Hammond Forward Daniel Carr then picked up the rebound and tucked it home for his first of the Calder Cup Playoffs.

Just 44 seconds later, Chicago extended its lead to 4-1 off a 3-on-1 rush for the Wolves. Forward Curtis McKenzie capitalized off a rebound as he batted the puck out of mid-air, past Hammond’s blocker and across the goal line for the tally.

The Wild cut Chicago’s lead to 4-2 as forward Kyle Rau scored 12 seconds into a power play at 16:05 in the second period. On the man advantage, the Wild got multiple chances to knock one past Dansk before the puck found its way to Rau near the right post. He picked up the puck and wristed one over Dansk’s left pad for his fourth of the postseason. Forwards Sam Anas and Gerry Mayhew earned the assists.

Chicago moved its lead back to three goals as McKenzie scored his second of the contest with 56.7 seconds remaining in the period to give the Wolves a 5-2 lead. Defenseman Nic Hague one-timed a shot that Hammond stopped, but the rebound popped out in front. McKenzie chipped the puck up and over Hammond into the net for Chicago’s second power-play goal of the game.

Iowa once again cut into Chicago’s lead as defenseman Matt Bartkowski recorded an unassisted goal at 1:52 in the third period. Bartkowski took a slap shot from the left point that changed directions in front of Dansk and found its way into the back of the net.

Chicago responded at 10:14 in the final stanza as forward Gage Quinney scored his first of the Calder Cup Playoffs. Playing 4-on-4, Carr stole the puck in the slot and then skated low before tossing the puck on net. His feed deflected off of Quinney’s leg and past Hammond for the score, making it a 6-3 game.

McKenzie completed his hat trick with a power-play goal at 16:42 in the third period. Down in the right corner, McKenzie drove to the net and slipped the puck between Hammond’s legs for his third of the game, extending Chicago’s lead to 7-3.

Donato earned his second tally of the game with 40 seconds remaining, moving the score to 7-4 in favor of the visitors. Donato one-timed a pass from forward Will Bitten that ricocheted off a Wolves defender and past Dansk for the tally. Forward Mitch McLain recorded the secondary assist on the play.

Chicago finished the game with a 7-4 win, outshooting the Wild 29-28. Iowa went 1-for-4 on the power play and 3-for-6 on the penalty kill. Chicago’s three power-play goals were the most allowed by the Wild in a game this postseason and the most scored in a game this series.

Chicago heads back to Allstate Arena for Game 6 with a 3-2 series lead. Iowa will try to force a Game 7 Monday evening. Puck drop is scheduled for 7:00 p.m.