GRINNELL COLLEGE ATHLETICS: Like many times before, Sinha Twins lead the way for GC as Pioneers Capture 9th at NCAA D-III National Championships 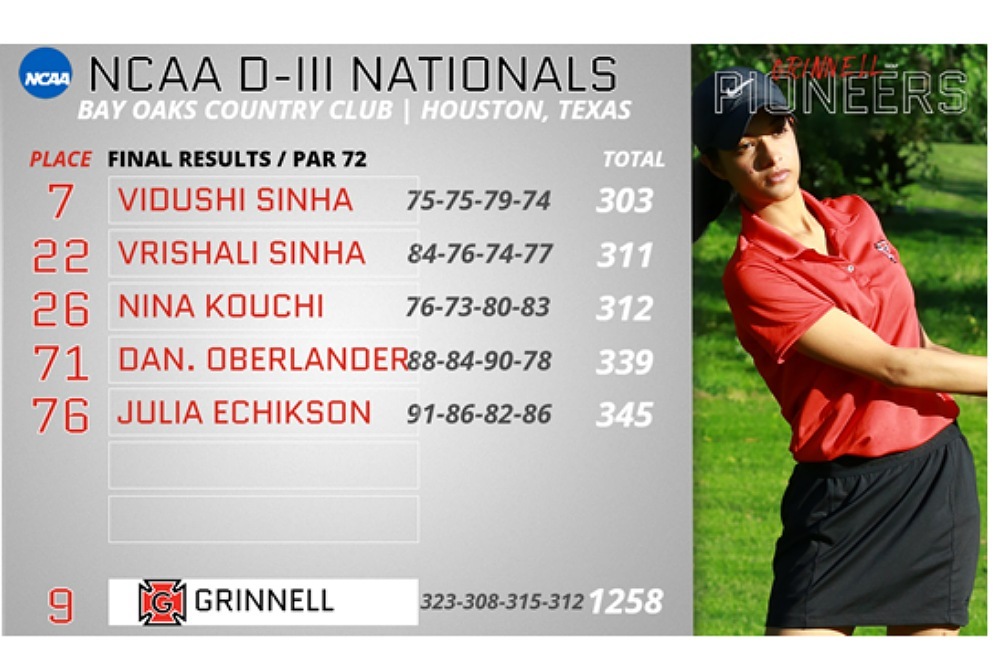 Grinnell College Athletics issued the following announcement on May 17.

Twins Vidushi Sinha'19 and Vrishali Sinha '19 have been the bedrock of the Grinnell College women's golf team for four years.

So, in their final competition as Grinnell student-athletes, it's only fitting they lead the Pioneers. Vidushi fired a 2-over-par 74 on the fourth and last day of the NCAA Division III National Championships Friday for an overall score of 303, good for a seventh-place tie and the best four-round score in program history. Sinha, whose Friday total at Bay Oaks Country Club was the best of her four at the tourney, recorded birdies on the par-4, 355-yard 13th hole and par-5, 460-yard 16th hole to go along with 12 pars.

And Vrishali Sinha was right there, too, recording a 77 for an overall total of 311. That is the second-best four-round score in program history. She birdied the par-5, 457-yard fifth hole plus had 11 pars to finish in a 22nd-place tie.

As a team, Grinnell finished in ninth place with a 1,258, which is the best four-day score for a Pioneer team. That placing is the second-highest for a Grinnell team, regardless of sport, at a national event. The Pioneers fired a 312 on Friday, the 12th-best score in program history.

Danielle Oberlander '21 finished the tourney with her best round of her four, shooting 78 for a 339. She had two birdies, those coming on the par-4, 365-yard ninth hole as well as the 16th hole. Oberlander added eight pars and tied for 71st place. Julia Echikson '20 had an 86 Friday for a total of 345. Echikson shot birdies on the seventh and 16th holes, plus had five pars while tying for 76th

New York University claimed the team title with a 1,217  while the individual champ was Cordella Chan of Williams College with a 296.