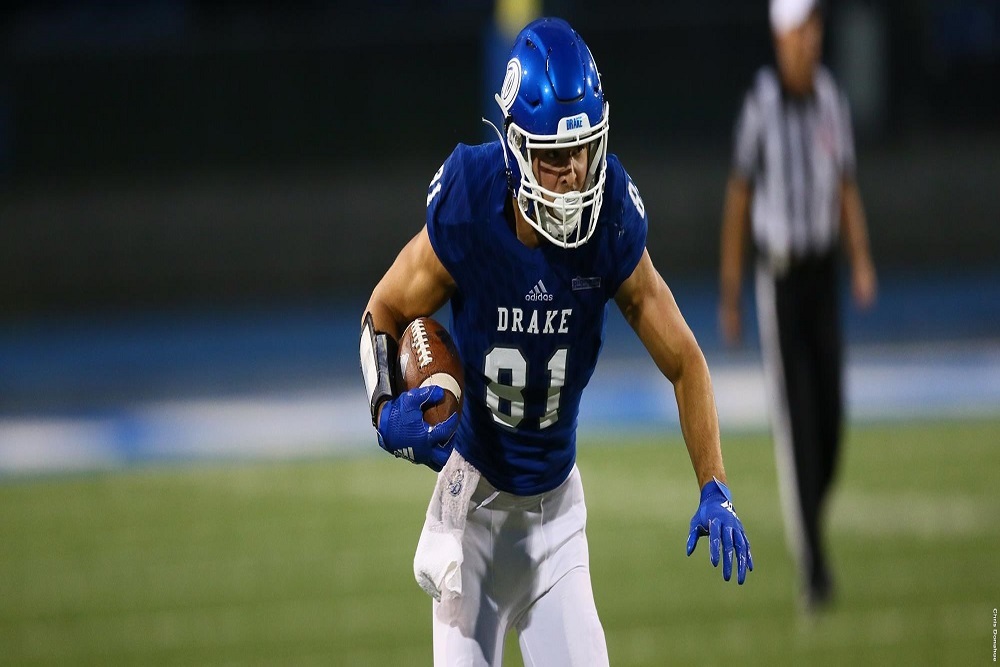 The Drake University football team plays its final non-conference game Saturday when it visits No. 3 South Dakota State. Drake (0-2) and South Dakota State (1-1) will kick off at 1 p.m. inside Dana J. Dykhouse Stadium. The game will be broadcast regionally on Midco Sports Network and will be available nationally on ESPN+.

Saturday's contest is the 13th all-time meeting in the series between the Bulldogs and the Jackrabbits. Drake holds an 8-4 advantage. The series started in 1945 with a 34-0 win by Drake at Drake Stadium, and the Bulldogs won eight of the first nine games in the series. South Dakota State, which transitioned from Division II in 2004, won the 10th all-time meeting in 1983 by a score of 20-3. The teams didn't meet again until the series was revived in 2016 as SDSU won that game and again the following year. Both games were played in Brookings, S.D.

Rewind
Drake is vying for its win of the regular season. The Bulldogs were edged by Truman State, 10-7, in their home opener last Saturday as Truman scored an 87-yard kickoff return to open the third quarter and held off Drake for the victory. Drake is trying to avoid its first 0-3 start to a season since the 1991 campaign. The Bulldogs will look to jump start their offense, which has scored 14 points in their first two games. Drake will need to protect freshman quarterback Ian Corwin, who has been sacked nine times this season. Fifth-year senior Drew Lauer is the team's leading rusher and has had success against SDSU as he returned a kickoff for a touchdown in the 2016 game. Devin Cates and Steve Doran combined for eight catches in the Truman State game after being held to three in the season opener. Cates and Lauer each have one receiving touchdown for the Bulldogs two touchdowns. Drake's defense bounced back from the opener with an outstanding performance against Truman State. The Bulldogs' defense held Truman to three points and 181 yards.

Scouting Drake
Drake begins a new era in 2019 under the leadership of first-year head coach Todd Stepsis. Stepsis, who is the 27th head coach in Drake football history in its 126 seasons. Stepsis takes the reins of the Bulldogs' program after serving as the program's defensive coordinator for the past five seasons under previous head coach Rick Fox. As the defensive coordinator, Stepsis built the Drake defense into one of the nation's top units and coached a total of 42 all-conference selections including the program's all-time leading tackler, John Huginin and the most recent Pioneer Football League Defensive Player of the Year, Nathan Clayberg.

Drake is picked to finish third in the 2019 Pioneer Football League Coaches Preseason Poll as it returns eight All-PFL performers. Four of those PFL selections return on defense in defensive linemen, Gavin Dinnen and Erin Morgan, linebacker Zac Rujawitz and safety Will Warner. The quartet were part of last season's unit that ranked in the top 15 in nearly every defensive statistical category. Warner had an outstanding junior season that was capped by being named Drake's first first-team All-American since Eric Saubert in 2015 and the Bulldogs' first Associated Press first-team All-American since 1982. Individually, Warner was second in the nation in interceptions with eight to also tie the Drake program record. He also led the nation in interception return yardage at 223 total yards. Outside of his interceptions, Warner was second on the team in solo tackles with 41 and successfully defended a total of 12 passes. Dinnen was a 2018 All-PFL First Team selection who recorded 3.0 sacks and 38 tackles. Morgan was selected to the 2018 All-PFL Second Team after he tallied 3.5 sacks, 8.0 tackles for loss and 21 tackles at defensive end. Rujawitz started all 11 games and is the top returning tackler with 54, including 22 solo stops. On the other side of the football, Drake will have a new quarterback under center in true freshman Ian Corwin. Corwin comes to Drake after a decorated prep career for Jenks High School in Tulsa, Okla. At Jenks, Corwin broke 15 school records, went 29-8 in three seasons as the starter and helped Jenks finish as state runners-up in 2018. Corwin will play behind an experienced offensive line and will have help from the Bulldogs' top three leading rushers and receivers from last season. Corwin's top three receiving targets, Devin Cates, Steven Doran and Mitch McFarlane combined for 1,865 receiving yards and 21 receiving touchdowns. The Bulldogs' top three returning rushers, Braeden Hartwig, Drew Lauer and Cross Robinson ran for 935 combined yards and seven touchdowns. Also, back is senior punter Ross Kennedy. Kennedy was an All-PFL honorable mention selection last season. He recorded 52 punts for an average of 37.3 yards, including a season-long 57-yarder against Montana. Kennedy placed 17 punts inside the 20-yard line and didn't kick a touchback all year. He finished the season No. 93 among FCS punters with his average of 37.3 yards per punt.

Scouting South Dakota State
South Dakota State nearly upset Minnesota on the road in its season opener. SDSU led 21-20 going into the fourth quarter, but the Gophers forced a fumble midway through the fourth and then pushed the football down field for the go-ahead touchdown and added the two-point conversion for 28-20 win. The Jackrabbits had one final chance as they returned the ensuing kickoff near midfield, but quarterback J'Bore Gibbs was sacked to end the game. SDSU bounced back in its home opener against new FCS member, Long Island, cruising to a 38-3 win over the Sharks. The Jackrabbits are an impressive 21-2 at their home stadium, Dana J. Dykhouse Stadium, since the facility opened in 2016.