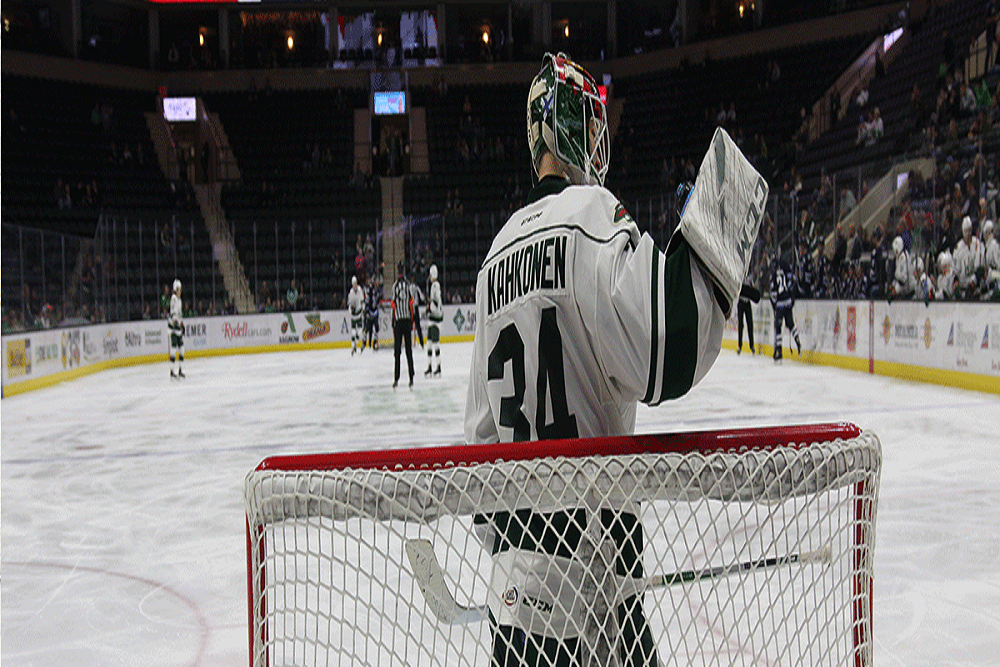 Iowa Wild took the first of two preseason games against the Manitoba Moose by a score of 2-1 Friday night at Ralph Engelstad Arena on the campus of the University of North Dakota.

Iowa took a 1-0 lead late in the first period as forward Will Bitten cashed in on a give-and-go with Grand Forks native Luke Johnson. Bitten fed Johnson, who gave it right back to Bitten and he snapped a shot past goaltender Adam Carlson (27 saves) at 18:46 in the first period. Defenseman Hunter Warner notched the secondary assist on the play.

The Wild extended its lead on a delayed penalty at 12:21 in the middle frame. Bitten was tripped up in the corner, giving the Wild a 6-on-5 opportunity. Defenseman Keaton Thompson then hit forward Dmitry Sokolov with a pass in the slot and he turned and fired a shot on net. His wrist shot bounced off the right post and into the back of the net to take a 2-0 lead.

Manitoba finally broke through at 19:38 in the third period, cutting Iowa’s lead to 2-1. Forward Jansen Harkins drew goaltender Kaapo Kahkonen (24 saves) out of the net and kicked the puck back into the slot for Maier. With an open net, he buried his shot to break Kahkonen’s shutout bid.

Iowa held on through the final 21 seconds and skated away with the 2-1 victory while outshooting the home side 29-25. The Wild went 0-for-2 on the power play and 3-for-3 on the penalty kill.

The Wild and the Moose rematch at Ralph Engelstad Arena at the University of North Dakota Saturday afternoon for the second of two preseason games. Puck drop is scheduled for 2:00 p.m.